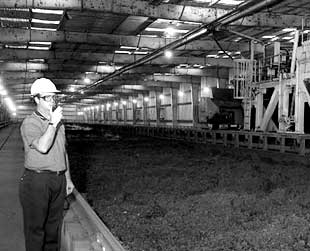 The sewage sludge industry meets the light of day

Nancy Holt, a retired nurse from Mebane, N.C., is beset by mysterious neurological problems. She blames the cause of her illness on the multiple unknown toxicities of the sewage sludge that has been spread since 1991 on the fields across from her house as “fertilizer.”

And Holt says she isn’t alone. People in her neighborhood have a high incidence of cancer and thyroid problems. Local creeks are no longer safe for kids to play in – the danger of staph infection is too great.

In 2001, Holt began chronicling the health problems in her area of rural Alamance County – 12 miles north of Chapel Hill. Soon she was tracking reports of sludge-related illnesses and deaths across the country.

“I put together the symptoms, the illnesses, the high cancer rates, the thyroid disorders in this community,” she says. “It is non-scientific, of course.”

“And we have precocious puberty, little girls developing breasts at 5 or 6 years old, little boys developing armpit hair. And that is something that people don’t want to talk about,” Holt says. “They will talk about their thyroid glands, their cancers, but they will not talk about early puberty. We are on a true toxic tilt.”

For the first time since she became involved in the sludge issue, Holt is guardedly hopeful that her concerns will finally be addressed, and that the sulphurous alliance between the Environmental Protection Agency (EPA), municipal sewer authorities and Synagro Technologies (the nation’s largest sludge disposal firm, which was recently bought by the Carlyle Group) – will be exposed for the blight it is.

In April, Sen. Barbara Boxer (D-Calif.), chair of the Environment and Public Works Committee, announced that her committee will hold hearings on the issue this summer. The catalyst is a confluence of recent news reports about sludge-related scandals.

In the Potomac River, 60 miles upstream from Washington, D.C., scientists have discovered many small-mouth male bass with eggs inside their sex organs. The cause of these “intersexed” fish is almost certainly endocrine disruptors – also known as estrogen mimickers – in the water, chemical pollutants that disrupt an animal’s natural hormonal system.

In February, the Washington Post reported that the concentration of intersexed fish is greatest near towns or near heavily farmed land. One major source of these endocrine disruptors is thought to be the post-treatment “cleaned” water from municipal sewage treatment centers that is discharged directly into the Potomac River system and runoff from fields “fertilized” with sludge.

In 2006, U.S. Geological Survey scientists surveyed chemical contaminants found in sludge “destined for land application” and concluded, “Potential concerns about the environmental presence of OWCs [Organic Wastewater Contaminants] include adverse physiological effects, increased rates of cancer, and reproductive impairment in humans and other animals, as well as antibiotic resistance among pathogenic bacteria.”

In 2004 when the intersexed fish were first discovered in the Potomac, Gina Solomon, a scientist at the Natural Resources Defense Council (NRDC) told the Associated Press, “It is not good news that there’s something that feminizes fish in your water.” Particularly when the Potomac is the source of drinking water for Washington, D.C.

Egg-bearing male fish had first been found in 2003 in the South Branch, a Potomac tributary in Hardy County, W.V., from which some locals get their water. A 2004 survey found that women in Hardy County have higher-than-normal rates of cancer of the ovaries and uterus.

This news of male fish bearing eggs was followed with an April report by the Associated Press that in 2000, nine Baltimore families – all black residents of the city’s east side – received food coupons in exchange for permission to allow researchers to spread “Class A” Baltimore sewage sludge (brand name, Orgro High Organic Compost) on their yards, till it into the soil and then plant grass seed.

The rationale for this experiment was to find out whether municipal sewage sludge could lower the amount of lead that children who played in the nine experimental yards would absorb. Veolia Water, the corporation that markets Baltimore municipal sludge as Orgro, claims its “beneficial biosolids” are so safe they are even used on the White House lawn.

“Beneficial biosolids” is the term that Powell Tate, a D.C.-based public relations firm, invented in the early ’90s, in an attempt to linguistically detoxify the 7 million tons of sludge – industrial waste, hospital waste, pharmaceuticals in addition to feces – that the nation’s 16,000 municipal sewer systems produce each year.

At the time, the EPA, working hand in hand with the Water Environment Federation and the corporate waste disposal industry, reclassified sewage sludge from a toxic waste to a fertilizer. As a USDA approved fertilizer, sludge was thus exempt from environmental regulations.

Today, waste disposal firms spread more than half of the 7 million tons of organic and inorganic toxins on American farms as “fertilizer.”

Andy McElmurray, a farmer in Hephzibah, Ga., fed his dairy cows silage that had been fertilized with sewage sludge laced with heavy metals. More than 300 of them died.

In February, a federal judge ordered the Department of Agriculture to compensate McElmurray for losses incurred when his land was poisoned between 1979 and 1990 by applications of Augusta, Ga., sewage sludge. That sludge contained levels of arsenic that were two times higher than EPA standards allow; of thallium (a heavy metal used as rat poison) that were 25 times higher; and of PCBs that were 2,500 times higher.

What’s more, milk from his neighbor’s dairy farm was sent to market with thallium levels 120 times higher than those allowed by the EPA in public drinking water.

In his ruling, U.S. District Judge Anthony Alaimo was particularly critical of the EPA and the University of Georgia for having endorsed “unreliable, incomplete and, in some cases, fudged” data about the Augusta sludge. That corrupt data was presented to the National Academy of Sciences, which then cited it in their July 2002 assertion that sewage sludge does not pose a risk to public health.

For example, in May 2003, the EPA fired David Lewis, one of the nation’s leading sludge researchers, for publicly criticizing the agency’s pro-sludge policy. In February 2004, at a hearing of the U.S. House Mineral and Resources subcommittee, Lewis testified:

The EPA has completely politicized the scientific peer-review process, both inside and outside the agency. … This whole process, of course, is nothing more than a scam. … It is a scam run by program office managers who are not qualified as research scientists and whose official position descriptions require that they defend EPA policies. In this case, the same EPA officials who developed the agency’s sludge policy are using the vast resources of the federal government to cover up adverse health effects and environmental damage resulting from the scientifically flawed policy they created.

The Resource Institute for Low Entropy Systems (www.riles.org) has been a leader in the sludge fight since the early ’90s. The Boston nonprofit was founded in 1990 by Abby Rockefeller, an ecologist involved with sewage-related issues since the ’70s. (Disclosure: Rockefeller is a member of the In These Times Publishing Consortium.)

It’s a public works program for corporations to dump their waste into publicly owned treatment facilities. We taxpayers pay for it not only in the infrastructure costs but also with our health from exposure to its toxic products – toxic wastewater and toxic sewage sludge – that are released into the environment. We are giving corporations a free ride. They have no liability. They dump their toxic waste down the drain and it is out of their hands.

Orlando, like Holt, is encouraged by the prospect of congressional hearings.

“There are thousands of people known to be sickened from the land application of sewage sludge,” she says, “people whose health is degraded, whose livestock have died or whose farms have been ruined. The Senate Committee on Environment and Public Works hearing will be the first time these people will get a chance to tell their stories.”

Taking the long view, Rockefeller puts it this way: “We human beings, the world over, so concerned about the growing shortage of clean water, must reconsider our cavalier use of water as the transportation medium for all our waste – industrial and personal.”