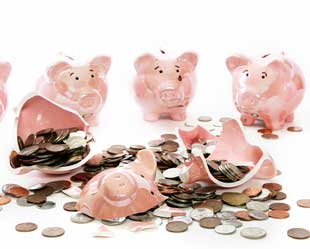 Pick your metaphor for the current state of American workers: Are they squeezed? Caught? Crunched? Three new books – by two top-notch national journalists and a leading progressive economist – exploit these images to convey how average Americans are losing out in today’s economy. And despite varied but overlapping prescriptions for new policies, none of the three offers an easy way out.

In The Big Squeeze: Tough Times for the American Worker (Knopf, 2008), New York Times labor reporter Steven Greenhouse pulls together some key statistics and compelling personal stories to depict the “broad decline in the status and treatment of American workers,” blue- and white-collar alike, over the past three decades.

Growing inequality costs workers dearly. For example, if the distribution of income today were the same as it was in 1979 (and if the economy had grown at the same rate as it has since then), the average family among the bottom four-fifths of Americans would now be earning $8,000 more each year than it actually does. At the same time, life has become more insecure for most of these working families, with health insurance, pensions and education – as well as the broader social safety net – becoming less generous and more precarious.

Greenhouse’s reporting goes beyond these increasingly familiar inequities to the pressures that workers experience on the job. Wal-Mart managers lock janitors into its buildings overnight. Major companies like Taco Bell force employees to work off the clock or manipulate their time records to cheat them out of pay. Manufacturers like Landis Plastics minimize safety precautions at the cost of workers’ lives and limbs.

Decades ago, Greenhouse argues, managers thought the “happy worker” was good for business, but now, he says, they employ a “bullying model” to “manage by fear.” Workers at the bottom fare worst, but even middle managers suffer from bullies above who are pushing them to cut costs and crush workers.

Although Greenhouse may overstate the benefits for workers from the informal social contract between business, labor and government after World War II, the contrast of today’s conditions with that period is harshly instructive. In a quickly sketched account, he blames – with varying degrees of emphasis – the deterioration of standards on globalization, immigration, union-busting (as well as unions’ own shortcomings), declining enforcement of labor laws and the growing power of investors.

But Greenhouse does best when telling the stories of workers like Kathy Saumier, who courageously – though unsuccessfully – fought to form a union that could stop safety hazards, sex discrimination and exploitation at the upstate New York Landis factory. Or managers like Drew Pooters, who was morally offended by demands from superiors at two corporations where he worked – Toys “R” Us and Family Dollar – to cheat employees out of pay for work they had completed.

Although Greenhouse credits some companies (like Costco) with trying to treat their employees better than most do, he makes clear that the big squeeze crushes not only jobs, wages, benefits and economic security, but also the daily work and family lives of millions of workers – and, possibly, the last shreds of human decency.

In Caught in the Middle: America’s Heartland in the Age of Globalization (Bloomsbury, 2008), former Chicago Tribune reporter Richard Longworth covers much of the same ground as Greenhouse. But in recounting the moving personal stories and observations from his travels, Longworth focuses more pointedly than does Greenhouse on the impact of globalization on communities in the Midwest.

Longworth vividly describes how globalization has hurt both small towns, like his hometown of Boone, Iowa, and big cities, like Detroit. But he also finds winners – or at least survivors – in communities like Beardstown, Ill. (where an influx of new immigrants fills the big, long-established meatpacking plant), and Chicago (where its “global city” status seems more precarious to me than Longworth suggests, and where many workers remain major losers).

Much as he laments the damage done, Longworth sees globalization as inevitable and argues that the Midwest must shed its long, successful reliance on manufacturing and find a new role in the modern marketplace. But he seems torn over whether even the most lean-and-mean factories can compete with those in, say, China.

Ironically, the small-town corporate meatpacking factories that he cites as a success – such as the Beardstown Cargill plant – now rely on immigrants because the meatpackers so effectively destroyed the good union wages that once prevailed (and globalization played little role in depressing those standards).

As alternatives, he promotes bioscience to build on the region’s agricultural base, biofuels from cellulosic biomass (but not corn-based ethanol) and high-speed rail to link Midwestern cities. All are potentially promising but not likely to replace the jobs and wages lost in manufacturing.

Ultimately, Longworth writes, the region must shed old, parochial thinking and emphasize education, embrace immigration and work together more as a region. The advice makes sense but it suffers from the assumption that we can’t also change globalization as it currently exists.

In Crunch: Why Do I Feel So Squeezed? (And Other Unsolved Economic Mysteries) (Berrett-Koehler, 2008), economist Jared Bernstein tries to elucidate the “mysteries” of his book’s subtitle. Organized around a collection of questions average people often ask about the economy – such as, “What’s right and wrong about globalization?” – the book wittily and succinctly explains basic concepts (like gross domestic product) and discusses major issues (such as healthcare reform and poverty).

More than Greenhouse and Longworth, Bernstein – who works with the nonprofit Economic Policy Institute – offers explanations of the big squeeze. The heart of the problem, he argues, is growing inequality.

The elite opinion makers’ explanation, which conveniently shifts the blame to each individual, is always that more education will mean less inequality. But the sectors adding the most new jobs in the near future won’t require skills much beyond those provided by a high school education, and many jobs needing higher skills will face global competition that will displace work and drive down wages.

While the bottom 90 percent of Americans have fared poorly with flat or declining incomes, many of the educated haven’t done well, either. Bernstein notes that between 2001 and 2005, the incomes of the “only pretty rich” (from the 90th to 99th percentiles in income) grew 3 percent in real terms. The income of the top 1 percent, meanwhile, grew 23 percent.

The problem isn’t education. It’s power. “Those who hold a privileged position in the economic power hierarchy,” he writes, “are able to steer the bulk of growth their way.”

Globalization has played a part in that power shift, but Bernstein argues globalization can’t (and, he implies, shouldn’t) be stopped. It can, however, be shaped.

When it comes to strategy, however, Bernstein reverts to a hope that modest centrist initiatives will spin out into broader challenges to the holders of economic power. But what’s needed is a movement that directly challenges the powerful and offers more ambitious hopes, nurtured by grassroots organizers and leaders who are willing to make inequality – and the big squeeze on American workers – central to the political debate.