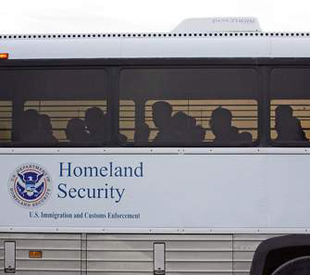 At 10 a.m. on May 12, Immigration and Customs Enforcement (ICE) agents descended on a meat processing plant in Postville, Iowa, about 200 miles northwest of Des Moines. ICE agents arrested 389 workers who it determined were undocumented – 304 of whom were indicted on various charges, mostly related to their immigrant status. The list of arrested did not include the owners or managers at the meat processing plant.

After Congress failed to pass comprehensive immigration reform in 2006, ICE adopted what is referred to as an “enforcement-only” approach to immigration. The incident in Postville is one example.

ICE arrests have increased 45-fold since 2001, according to the National Council of La Raza, a Washington D.C.-based nonprofit. In 2007, nearly 5,000 workplace immigration arrests occured nationwide.

The children of those arrested – many of whom are U.S. citizens – suffer consequences. The raid in Iowa “created panic in the school,” said Janet Murgu’a, president of the National Council of La Raza, during a May 20 hearing before the House subcommittee on workforce protections. She said it forced St. Bridget’s Catholic Church in Postville to mobilize and feed 450 migrants the first night of the raid, and to shelter 150 children who spent the night on mats and in pews.

The number of children with undocumented parents is unknown, but a March 2005 report by the Pew Hispanic Center found that 4.9 million children are in families with at least one undocumented parent. Of those, 3.1 million – or 63 percent – are U.S. citizens.

Last November, ICE adopted humanitarian guidelines after Sen. Ted Kennedy (D-Mass.) and others pushed for their implementation. The discretionary guidelines require agents to investigate whether humanitarian concerns exist among those arrested – including “those with serious medical conditions … pregnant women, nursing mothers, parents who are the sole caretakers of minor children or disabled or seriously ill relatives, and parents who are needed to support their spouses in caring for sick or special needs children or relatives.”

Agents are also asked to coordinate with other institutions, such as foster care systems and the Department of Heath and Human Services.

“What we’d like to see is those regulations enforced on a consistent basis – strictly enforced and not applied in a discretionary way,” Murgu’a testified.

Kathryn Gibney is principal of an overwhelmingly (96 percent) Latino elementary school in San Pedro, Calif., a community that experienced a raid in March 2007. She told lawmakers that members of her community have witnessed white ICE vans stationed near school grounds in Oakland and Berkeley to ensnare parents.

Gibney said the effect on her school has been “ongoing relentless terror.”

“The impact of these raids has been devastating,” she said. “Absentee rates have soared. Test scores have dropped. Students who do make it to school remain distracted, as they worry about whether their families will be at home when they return.”

The San Pedro raid last year occurred in the predawn hours before a state-mandated exam. About 40 students were absent that day – seven times greater than the school’s normal absence rate.

According to Gibney, in San Rafael, Calif., on May 8, ICE agents stopped a second-grade girl who was on her way to school with her father. The agents couldn’t communicate with the father in his native language, so the girl served as translator. The agents eventually arrested her father.

ICE insists it acts humanely when rounding up illegal aliens. Acting Deputy Assistant Director of ICE James Sperro told Congress that agents involved in the Postville incident questioned detainees “no less than three times about humanitarian issues, such as child custody concerns.” He said agents eventually released 62 of those arrested, but added that those released are still likely to be charged.

As Gibney told the committee: “There must be a way to execute a federal mandate in a more humane manner.”