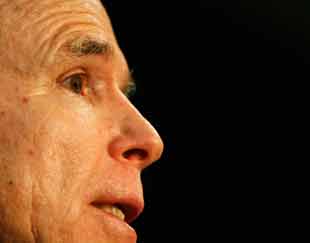 Dismantling the Myth of McCain

How the Republican senator’s maverick image is a sham

When McCain could have used his moral weight as a torture victim to stand up to Bush's policies, he did so only rhetorically, eventually agreeing to legislation that still permitted waterboarding.

As the presidential race shifts into summer gear, Democrats have a McCain problem. And John McCain has a Bush problem – or at least Democrats hope he will.

Judging from opinion polls about the president and the direction the country is going, if George W. Bush were on the ballot this fall, Democrats would win the presidency. Even an unspecified Democrat running against a generic Republican would win handily.

But with Sen. Barack Obama facing Sen. McCain, early summer polls show the race gets much tighter, with the lead over McCain for the real Democratic candidate running about 10 points less than for the generic.

McCain’s strength stems from his media-fostered image as a straight-talking maverick reformer and former prisoner of war. But the downside for McCain is that many Republicans distrust him, with roughly a quarter of Republicans withholding votes from him even in late primaries.

With his eyes on the presidential race, McCain has spent the past few years cultivating the Right, most famously reconciling with the Rev. Jerry Falwell in 2006, despite having denounced him and televangelist Pat Robertson in 2000 as “agents of intolerance.”

Even more compelling visually is the 2004 picture of “The Hug” – McCain throwing his arms around President Bush and leaning against the president’s chest with a sheepish smile on his face, as Bush waves to a crowd. In February, Bush gave McCain his political embrace, declaring him a “true conservative.”

So, who is “the real McCain”? (Incidentally, the title of a new book by journalist Cliff Schechter.) The record shows McCain to be a strongly pro-business, anti-government, hawkish neoconservative who has increasingly supported many right-wing evangelical causes (such as teaching intelligent design as an alternative to evolution).

Yet at times he has alienated parts of the Republican Right, mainly on issues in which McCain’s position safely reflected strong majorities of public opinion, as journalists David Brock and Paul Waldman argue in Free Ride: John McCain and the Media.

McCain won his reformer credentials by co-sponsoring legislation with progressive Sen. Russ Feingold (D-Wis.) that, in 2002, banned soft money contributions to political parties. The long fight for the bill won McCain adulation in the press. But ultimately, it didn’t keep soft money out of politics, and some conservatives believed it was more likely to hurt Democrats than Republicans.

By 2006, as Schechter reports, McCain was backing away from legislation for federal election public financing that he had once supported.

By then, McCain had won the image he needed as a clean-politics reformer to expunge the effects of his having been named in 1991 as one of the “Keating Five” – senators who had received financial favors from, and then tried to help, fraudulent savings and loan operator Charles Keating.

Yet his image as a clean politician above the political swamp of Washington politics is most belied by his long and deep connections with corporate lobbyists.

According to the anti-McCain website Progressive Media USA, McCain had at least 118 lobbyists running his campaign, including campaign manager Rick Davis – who lobbied for major telecommunications companies (for whom McCain has often intervened legislatively) – and senior adviser Charles Black – who was registered as a lobbyist for right-wing guerrilla leader Jonas Savimbi of Angola and such dictators as Ferdinand Marcos of the Philippines and Mobutu Sese Seko of Zaire.

In May, the campaign dismissed several lobbyists and promulgated new rules for campaign workers. But McCain’s reliance on corporate special interest lobbyists is so pervasive that his personal image will continue to suffer.

Brock and Waldman argue, however, that the myth of McCain has two other founding pillars: his time as a prisoner of war in Vietnam and his cultivation of the press. McCain is sure to continue using his time in prison for political advantage. But when he had the chance to use his moral weight as a victim of torture to stand up to Bush’s policies, he did so only rhetorically, eventually agreeing to legislation that still permitted techniques such as waterboarding.

The mass media can be fickle, but, initially, McCain has gotten a pass from many high-profile reporters. As Brock and Waldman note, McCain has carefully cultivated relationships with the press, providing unusually open access and surprising candor – or at least the appearance of candor.

However, as recounted by Schechter, as well as Brock and Waldman, some reporters have noted the occasional flare-ups of McCain’s remarkably mean temper in dealing with colleagues and even his wife. And McCain’s shining armor, which has blinded many reporters, is increasingly tarnished by his associations with right-wing evangelical supporters, like the Rev. Rod Paisley and the Rev. John Hagee, who preached that Hitler’s genocide of the Jews was simply part of God’s plan.

There’s also a long history of McCain’s shifts to the right and his flip-flops. He moved from rejecting the repeal of Roe v. Wade to adopting an extreme opposition to abortion rights, and from opposing Bush’s initial tax cuts for the rich to making permanent extension of those cuts the centerpiece of his economic policy. Once lauded for teaming with Sen. Ted Kennedy (D-Mass.) to promote comprehensive immigration reform (favored by Bush and many business interests), McCain now promotes border security to cater to the anti-immigrant Right.

As the myth of McCain comes into question, so might voters’ evaluations of the man and his character: Voters’ opinions of McCain became less favorable over the late spring, according to recent Pew Research Center polling. But so far, those who view him unfavorably do so primarily because of his stance on issues, not for personal factors. (By contrast, Pew reports, a larger share of negative reaction to Obama is related to “the kind of person he is,” not his position on issues.)

At this point, Pew reports, only 40 percent of independent voters think McCain will continue Bush’s policies.

But Democracy Corps, a Democratic polling group, finds that 56 percent of voters interviewed agreed that Obama represents change and that McCain would continue Bush’s policies, and said that fact would influence them to favor Obama. (It was the most influential of several definitions of the contest the group tested.)

In other words, there’s potential to make a powerful case that McCain represents a third Bush term. After all, according to Congressional Quarterly, McCain voted with Bush 100 percent of the time so far this year, 95 percent of the time in 2007, and around 90 percent since Bush took office.