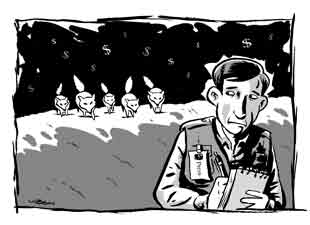 Is the Fourth Estate a Fifth Column?

Without a free and independent press, this 250-year-old experiment in self-government will not make it. As journalism goes, so goes democracy

I heard this story a long time ago, growing up in Choctaw County in Oklahoma before my family moved to Texas. A tribal elder was telling his grandson about the battle the old man was waging within himself. He said, “It is between two wolves, my son. One is an evil wolf: anger, envy, sorrow, greed, self-pity, guilt, resentment, lies, false pride, superiority and ego. The other is the good wolf: joy, peace, love, hope, serenity, humility, empathy, generosity, truth, compassion and faith.”

The boy took this in for a few minutes and then asked his grandfather, “Which wolf won?”

The old Cherokee replied simply, “The one I feed.”

Democracy is that way. The wolf that wins is the one we feed. And in our society, media provides the fodder.

Our media institutions, deeply embedded in the power structures of society, are not providing the information that we need to make our democracy work. To put it another way, corporate media consolidation is a corrosive social force. It robs people of their voice in public affairs and pollutes the political culture. And it turns the debates about profound issues into a shouting match of polarized views promulgated by partisan apologists who trivialize democracy while refusing to speak the truth about how our country is being plundered.

Our dominant media are ultimately accountable only to corporate boards whose mission is not life, liberty and the pursuit of happiness for the whole body of our republic, but the aggrandizement of corporate executives and shareholders.

These organizations’ self-styled mandate is not to hold public and private power accountable, but to aggregate their interlocking interests. Their reward is not to help fulfill the social compact embodied in the notion of “We, the people,” but to manufacture news and information as profitable consumer commodities.

Democracy without honest information creates the illusion of popular consent at the same time that it enhances the power of the state and the privileged interests that the state protects. And nothing characterizes corporate media today more than its disdain toward the fragile nature of modern life and its indifference toward the complex social debate required of a free and self-governing people.

Let’s look at what is happening with the Internet. This spring the cable giant Comcast tried to pack a Federal Communications Commission (FCC) hearing on network neutrality by hiring strangers off the street to ensure that advocates of net neutrality would not be able to get a seat in the hearing room.

SaveTheInternet.com – a bipartisan coalition – and its supporters helped expose the ruse. Soon after, there was a new hearing, this time without the gerrymandering seating by opponents of an open Internet.

Now Rep. Ed Markey (D-Mass.) has introduced a bill to advance network neutrality, and it has become an issue in the presidential campaign.

When Verizon tried to censor NARAL’s (National Abortion Rights Action League) use of text messaging last year, it was quick action by Save the Internet that led the company to reverse its position. Those efforts also led to an FCC proceeding on this issue.

Wherever the Internet flows – on PCs, cell phones, mobile devices and, very soon, new digital television sets – we must ensure that it remains an open and nondiscriminatory medium of expression.

By 2011, the market analysts tell us, the Internet will surpass newspapers in advertising revenues. With MySpace and Dow Jones controlled by News Corporation’s Rupert Murdoch, Microsoft determined to acquire Yahoo!, and with advertisers already telling some bloggers, “Your content is unacceptable,” we could potentially lose what’s now considered an unstoppable long tail of content offering abundant, new, credible and sustainable sources of news and information.

So, what will happen to news in the future, as the already tattered boundaries between journalism and advertising is dispensed with entirely and as content programming, commerce and online communities are rolled into one profitably attractive package?

Last year, the investment firm of Piper Jaffray predicted that much of the business model for new media would be just that kind of hybrid. They called it “communitainment.” (Oh, George Orwell, where are you now that we need you?)

Across the media landscape, the health of our democracy is imperiled. Buffeted by gale force winds of technological, political and demographic forces, without a truly free and independent press, this 250-year-old experiment in self-government will not make it. As journalism goes, so goes democracy.

Mergers and buyouts change both old and new media. They bring a frenzied focus on cost-cutting, while fattening the pockets of the new owners and their investors. The result: journalism is degraded through the layoffs and buyouts of legions of reporters and editors.

Advertising Age reports that U.S. media employment has fallen to a 15-year low. The Los Angeles Times alone has experienced a withering series of resignations by editors who refused to turn a red pencil into an editorial scalpel.

The new owner of the Tribune Company, real estate mogul Sam Zell, recently toured his new property Los Angeles Times, telling employees in the newsroom that the challenge is this: How do we get somebody 126 years old to get it up? “Well,” said Zell, “I’m your Viagra.”

He told his journalists that he didn’t have an editorial agenda or a perspective about newspapers’ roles as civic institutions. “I’m a businessman,” he said. “All what matters in the end is the bottom line.”

Zell then told Wall Street analysts that to save money he intends to eliminate 500 pages of news a week across all of the Tribune Company’s 12 papers. That can mean eliminating some 82 editorial pages every week just from the Los Angeles Times. What will he use to replace reporters and editors? He says to the Wall Street analysts, “I’ll use maps, graphics, lists, rankings and stats.” Sounds as if Zell has confused Viagra with Lunesta.

Former Baltimore Sun journalist and creator of HBO’s The Wire, David Simon, chronicled the effect that crosscutting and consolidation has had in media businesses and on the communities where those businesses have made so much money. He wrote in a Washington Post op-ed, “I did not encounter a sustained period in which anyone endeavored to spend what it would actually cost to make the Baltimore Sun the most essential and deep-thinking and well-written account of life in central Maryland. The people you needed to gather for that kind of storytelling were ushered out the door, buyout after buyout.”

Or as journalist Eric Alterman recently wrote in the New Yorker: “It is impossible not to wonder what will become of not just news but democracy itself, in a world in which we can no longer depend on newspapers to invest their unmatched resources and professional pride in helping the rest of us to learn, however imperfectly, what we need to know.”

For example, we needed to know the truth about Iraq. The truth could have spared that country from rack and ruin, saved thousands of American lives and hundreds of thousands of Iraqi lives, and freed hundreds of billions of dollars for investment in the American economy and infrastructure.

But as reporters at Knight Ridder – one of the few organizations that systematically and independently set out to challenge the claims of the administration – told us at the time, and as my colleagues and I reported in our PBS documentary Buying the War, and as Scott McClellan has now confessed, and as the Senate Intelligence Committee confirmed in June, the Bush administration deceived Americans into supporting an unprovoked war on another country. And it did so using erroneous and misleading intelligence – and with the complicity of the dominant media. It has led to a conflict that, instead of being over quickly and bloodlessly as predicted, continues to this day into its sixth year.

We now know that a neoconservative is an arsonist who sets a house on fire and six years later boasts that no one can put it out. You couldn’t find a more revealing measure of the state of the dominant media today than the continuing ubiquitous presence on the air and in print of the very pundits and experts, self-selected message multipliers of a disastrous foreign policy, who got it all wrong in the first place. It just goes to show, when the bar is low enough, you can never be too wrong.

The dominant media remains in denial about their role in passing on the government’s unverified claims as facts. That’s the great danger. It’s not simply that they dominate the story we tell ourselves publicly every day. It’s that they don’t allow other alternative competing narratives to emerge, against which the people could measure the veracity of all the claims.

Now the dominant media is saying, “Well, we did ask. We did do our job by asking tough questions during the run-up to the war.”

But I’ve been through the transcripts. And I’ll tell you, you will find very few tough questions. And if you come across them, you will discover that they were asked of the wrong people.

John Walcott, Washington bureau chief for McClatchy, formerly Knight Ridder, recently said of his colleagues in the dominant media, “They asked a lot of questions, but they asked even the right questions of the wrong people.” They were asked of the sources who had cooked the intelligence books in the first place or who had memorized the White House talking points and were prepared to answer every tough question with a soft evasion or an easy lie, swallowed by a gullible questioner.

Following the March 2003 invasion, Vice President Dick Cheney dropped into a media dinner to thank the guests for their all-the-war-all-the-time coverage of the contrived and manufactured war.

Sadly, in many respects, the Fourth Estate has become the fifth column of democracy, colluding with the powers that be in a culture of deception that subverts the thing most necessary to freedom, and that is the truth.

But we’re not alone and we know what we need to say. So let us all go tell it on the mountains and in the cities. From our websites and laptops, the street corners and coffeehouses, the delis and diners, the factory floors and the bookstores. On campus, at the mall, the synagogue, sanctuary and mosque, let’s tell it where we can, when we can and while we still can.

Democracy only works when ordinary people claim it as their own.

This article was adapted from Bill Moyers’ keynote address at the National Conference for Media Reform Conference in Minneapolis on June 7. You can read and respond to the full speech at www.pbs.org/moyers.

Bill Moyers is the president of the Schumann Center for Media and Democracy and the host of Bill Moyers Journal on PBS.