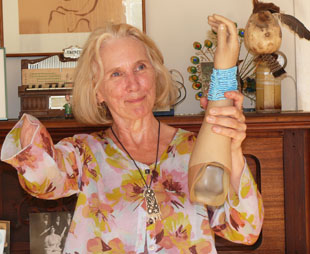 Diana Levine holds her prosthetic arm in the music room of her house on a dirt road in Marshfield, Vt.

Consumers' right to sue for drug-caused injuries dates back to 1852. But in 2006, the FDA quietly tucked a pro-preemption phrase into the preamble of an FDA-labeling law.

Struck by a blinding migraine, Vermont musician Diana Levine went to a clinic where she was injected with the anti-nausea drug Phenergan, produced by Wyeth Pharmaceuticals. Within weeks, the hand that had fingered her guitar was black with gangrene. Doctors amputated below the wrist and, when that failed to stop the necrosis, removed her forearm.

Wyeth’s label had warned that hitting an artery could cause irreversible damage, but it did not specifically direct physicians to avoid delivering the drug with intravenous (IV) push injection – rather than free-flowing IV drip or intramuscular shot.

Levine sued in Vermont court, charging that, because Wyeth had known for decades that using IV push to inject Phenergan directly into a vein creates avoidable risk, it should have added specific instructions on its label barring the practice.

Wyeth argued that Food and Drug Administration (FDA) approval of Phenergan and its label immunized it from state-level lawsuits. The Vermont court disagreed and awarded Levine $6.8 million.

The U.S. Supreme Court will hear Wyeth’s appeal on Nov. 3, the day before the presidential election, when few people will be paying attention. They should be.

If Wyeth’s legal defense wins, Rep. Henry Waxman (D-Calif.) said at a hearing in May, “Patients [who are] hurt by defective drugs … would no longer have the ability to seek compensation for their injuries.”

Levine is in her early 60s, has clear blue eyes and white hair that falls loosely around her unguarded face. She laughs easily and there is anger, but no bitterness, when she reflects that “all Wyeth needed to do was that simple label change. This loss of my arm, and the effect it had on my livelihood and my whole life didn’t need to happen.”

As for the FDA, she says, “I know there are good hearts there and [if Wyeth wins] I want to ask them: ‘How do you feel about not having us little people out here to tell you when something goes wrong, and a court system to help you hold drug companies accountable?’ “

Wyeth’s defense – and the fate of the kind of liability litigation that exposed the dangers of Vioxx – rides on whether the Supreme Court accepts the FDA’s new doctrine of “preemption.” The legal term means, in this instance, that a federal agency can write rules that preempt – or override – the right of a person to sue for damages in state courts. Some legal experts see the Bush administration’s embrace of preemption as part of a concerted, stealth strategy to impose, by bureaucratic fiat, the tort “reforms” that corporations failed to lobby though Congress.

“So far, seven federal agencies have issued over 51 potentially preemptive rules, often without any opportunity for public comment,” wrote Kathleen Flynn Peterson, former president of the American Association for Justice.

What is at stake, then, is tens of thousands of product-liability suits against drug makers; the right of many consumers to sue if they are harmed by FDA-approved drugs; and a strong financial incentive for drug companies to set high safety standards, follow drugs after approval, update labeling and issue recalls. And, of course, there is Levine’s compensation.

Consumers’ right to sue for drug-caused injuries dates back to 1852. But in 2006, the FDA quietly tucked a pro-preemption phrase into the preamble of an FDA-labeling law.

“Preemption had never been raised by drug companies before Levine,” says Richard Rubin, the small-town Vermont lawyer who won against Wyeth’s high-powered legal team, “because there had never been any preemption.”

The effect, of this “radical legal doctrine,” said Waxman at the May congressional hearing, is “you might have been injured by a defective product, but you can’t go and sue the manufacturer, who might have even known it was defective, because the FDA said it was not defective when they approved it. That to me is an absurd position.”

But drug companies get the logic, as do other corporations subject to consumer lawsuits. Showing uncharacteristic affection for federal regulation, Boeing, Ford Motor Company, General Electric, Microsoft and R.J. Reynolds Tobacco are supporting Wyeth before the Supreme Court.

Siding with Levine are 47 U.S. states attorneys general, 18 members of Congress and a panoply of public interest groups that have filed “friend-of-the-court” amicus briefs. They are joined by former FDA commissioners Donald Kennedy and David Kessler whose August amicus brief notes that traditionally, corporations, not the FDA, bear “ultimate responsibility” for drug safety: “[P]ro-preemption arguments … turn that understanding upside down, relieving manufacturers of front-line responsibility for the safety of their drugs, and handing that job to the FDA.”

But the FDA isn’t up to the job. The agency’s own Science Board found that “American lives are at risk” because the FDA “is not positioned to meet current or emerging regulatory responsibilities.”

A 2006 Government Accountability Office investigation found the FDA was incapable of ensuring drug safety. After initial approval – when many problems surface – the agency lacked the resources to gather independent data and the authority to compel drug companies to provide follow-up studies.

Add to that the conflicts of interest, cronyism and corporate influence that have flourished in Bush bureaucracies, from FEMA to the Justice Department to the FDA.

The architect of FDA’s preemption policy is Daniel Troy. Before becoming the agency’s chief counsel and primary liaison to the White House, Troy had represented industry, frequently suing the agency on behalf of drug and big tobacco companies. After leaving the FDA, he slipped into a top post at drug giant GlaxoSmithKline.

The revolving door also swung Randall Lutter into the post of FDA deputy commissioner for policy, where he defended the agency’s embrace of preemption before Congress. Lutter was a member of the ExxonMobil-funded, global warming-denying Annapolis Center. He was also resident scholar at the American Enterprise Institute, a right-wing think tank that takes oil and tobacco money and advocates vigorously for “tort reform.”

The Supreme Court’s acceptance of Levine falls into a pattern that suggests it is in sync with the Bush administration’s push to make preemption part of its legacy.

A March Supreme Court case surrounding Rezulin, the now-withdrawn diabetes drug linked to liver failure, could have voided the right to sue – even when a drug company commits fraud by concealing dangers from the FDA. But that case, Warner-Lambert Co. v. Kent, failed to make law because a tie vote resulted when Chief Justice John Roberts recused himself over ownership of Pfizer/Warner-Lambert stock. (Although Levine v. Wyeth will have industry-wide impact, few expect another recusal.)

Riegel is “a resounding victory for the preemption defense and for the business community,” cheered Alan Untereiner, a lawyer for the Product Liability Advisory Council.

Wyeth v. Levine could be the next step for preemption – extending it to all FDA-approved pharmaceuticals, and drastically restricting the right to a jury trial.

In Reigel, Justice Stephen Breyer provocatively asked which group you rather would trust: “An expert agency, on the one hand, or 12 people pulled randomly for a jury role? …What worries me is, what happens if the jury is wrong?”

But in the recent cases of Vioxx, Trasylol and Redux, it was not the jury that was wrong in finding for the dead and injured, it was the drug manufacturers that “withheld key information from the FDA…while continuing to market their unsafe drug to an unsuspecting public,” wrote the New England Journal of Medicine in a brief supporting Levine.

The new FDA stance, then, promises Americans “the worst of both worlds … an FDA incapable of protecting them, and no tort system to provide compensation if they are injured,” Georgetown University law professor David Vladeck wrote in the July Cornell Law Review.

So, as you follow the November election results, listen for news of Wyeth v. Levine – as if your right arm depended on it.