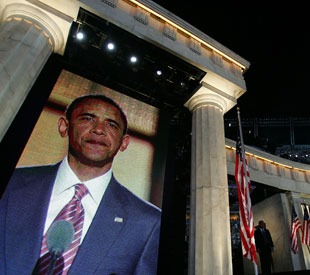 His impressive number of small donors aside, Sen. Barack Obama has himself admitted that his campaign would have been impossible without ‘asking rich people’ for money.

You Can’t Be President

The decrepit state of American democracy

And what of us, the democratic people, so alienated from their government that barely half of us can be stirred to vote in any presidential election?

In the late spring of 2007, I found myself in a Manhattan playground in the midst of what can only be described as a children’s riot. Moving to protect my younger daughter from the mob, I wound up surrounded by kids firing squirt guns and hurling water balloons at a boy who appeared to be the target of an organized attack. The wild intensity of the conflict made me curious, enough to ask the boy, while he fended off his assailants from the upper platform of a jungle gym, to explain his plight. He shouted his reply: “They’re rebelling against me because I’m the dictator!”

So far so good, I thought. At least these 11- and 12-year-old Americans still understood the spirit of democracy. Unfortunately, I wasn’t so sure about their parents. Granted, there were lots of prominent adults, ranging from political right to left, who continued to profess their faith in America as a functioning democracy committed to its Constitution. However, there was plenty of evidence to contradict their optimism.

Some pessimists might, for example, cite the disputed 2000 presidential vote count in Florida. Others could point to the Bush administration’s frequent resort to torture and “rendition” of terrorist suspects, warrantless domestic spying, and presidential “signing statements” intended to nullify the will of Congress as evidence of a decline in U.S. democracy – and a commensurate rise in an imperial presidency.

But these skeptical voices, while significant, still formed a distinct minority. Most established commentators remained insistently upbeat about what they viewed as a fundamental, almost genetically coded American devotion to self-government and freedom – a profound faith that any damage caused by President Bush to the constitutional system was somehow automatically self-correcting.

Typical are the editors of Junior Scholastic magazine. In a Sept. 3, 2007, article titled “Could You Be President?” the magazine’s editors outlined what they said were the basic requirements for the job of “President/Chief Executive.” According to Junior Scholastic, “The presidency has been called the world’s toughest job,” in part because of the “immense responsibility” of being “the leader of the free world.”

But as hard as it is to be president, the editors clearly wanted to suggest that virtually anyone could become president.

Employing the format of a help-wanted advertisement, the article asked, “Before you decide whether or not to run, let’s take a closer look at our ad – and the Constitution.” True, as Junior Scholastic writer Kathy Wilmore explained, “you might get” the idea “looking at the presidents we’ve had so far” that the Oval Office was off limits to vast sectors of the population: “All but one have been white male Protestants. (The exception, John F. Kennedy, was Catholic.)” But, according to Wilmore, this was no reason to be discouraged, since the wide-open eligibility rules under the Constitution had caused the current presidential campaign to be “more diverse than ever before.”

To underscore this multicultural melting pot of presidential potential, Junior Scholastic included a photo depicting a young black female student with long braids, right hand raised above a lectern affixed with the presidential seal, as she “finds out how it feels to take the oath of office.”

Still, while I don’t doubt that the people at Junior Scholastic mean well, their cheerful discussion about access to the highest office in the land only reinforces what is increasingly a destructive national delusion – that widespread, up-from-the-ground, truly popular democracy, both political and economic, really exists in America. I suppose we can be grateful that such a deep and abiding faith in the possibility of equality and self-government survives against such great odds.

At the same time, however, we should be alarmed by political propaganda that exploits the sort of naive assumptions promoted by both popular children’s magazines and university professors. I’m all for hope, audacious or otherwise, but I’m opposed to wishful thinking in dire times. Saying that anyone can be president – or that Americans remain “resolutely democratic in bearing and aspiration” – is a bit like expressing a belief in the literal existence of Santa Claus.

The latest Pollyannaish narrative about the triumph of popular democracy focused on the savage duel between Sens. Hillary Clinton and Barack Obama, finally won by Obama in early June, on the night of the South Dakota and Montana primaries. Since the “Could You Be President?” issue of Junior Scholastic was published, Obama, with overt reference to Lincoln’s own life, seemed to revive the hopes of authentic democratic choice. As the primary season wore on, the junior senator from Illinois was increasingly portrayed in the media as the “people’s choice,” versus the junior senator from New York, who was, at least at the outset, clearly favored by the majority of state and national party bosses, foremost among them her husband.

But Obama’s experience as a community organizer among the poor, mixed with his carefully blended rhetoric of populism and national unity, belied his impeccable establishment credentials. One need only examine their fierce competition for money to understand why Obama’s idealistic-sounding campaign slogan, “Yes, we can!,” rings so hollow when contrasted with the political facts of life.

“Yes, we can!” – a softer, blander version of Howard Dean’s 2004 campaign slogan, “You have the power!” – implies that ordinary people can determine their own political fate. Certainly Obama’s early success at raising money in sums of $200 or less (an estimated 625,000 such contributions compared with 210,000 for Clinton through January 2008, according to the Campaign Finance Institute) supported the argument that his was the more popular candidacy.

But this overlooks Obama’s genuine experience as an organization man who posed little threat to business as usual in Washington. To read Obama’s list of top 20 contributors – prominent bank, media, law-firm and corporate contributors, 11 of whom were also in Clinton’s top 20 – was to see a man already deeply compromised by the exigencies of power politics.

In his book The Audacity of Hope, Obama acknowledges that a successful campaign proclaiming, “Yes, we can!” isn’t feasible in modern American politics without a huge amount of money to pay for the amplifiers.

“Money can’t guarantee victory – it can’t buy passion, charisma, or the ability to tell a story,” he writes. “But without money, and the television ads that consume all the money, you are pretty much guaranteed to lose. Absent great personal wealth, there is basically one way of raising the kind of money involved in a U.S. Senate race. You have to ask rich people for it.”

In his speech announcing his candidacy for president in Springfield, Ill., Obama alluded to Lincoln’s famous “House Divided” speech – which highlighted the toxic split between slaveholding states and free states – to buttress his call for the country to “stand together.” But if one looked at the millions pouring into his campaign coffers from Wall Street and K Street, it was hard to know what sort of house Obama wanted to live in and on which side of town. Was it the house down the street or the house of J. P. Morgan?

The health of the herd

And what of us, the democratic people, so alienated from their government that barely half of us can be stirred to vote in any presidential election? From what I can see, the passion for “homeland security” seems inexorably to be replacing the passion for a self-governing homeland.

In this observation I find support in Alexis de Tocqueville’s celebrated second volume of Democracy in America (published in 1840, five years after the first).

The will of man is not shattered, but softened, bent, and guided: men are seldom forced by it to act, but they are constantly restrained from acting: such a power does not destroy, but it prevents existence; it does not tyrannize, but it compresses, enervates, extinguishes, and stupefies a people, till each nation is reduced to be nothing better than a flock of timid and industrious animals, of which the government is the shepherd.

When I survey the political landscape of contemporary America, I fear that what Tocqueville warned against has come true.

We now have a reckless, authoritarian president impervious to the will of Congress, and, more important, the will of the people; a Congress unwilling to defy the president; candidates in collusion with the money interests; an apathetic, consumption-obsessed citizenry that has lost the habit of exercising power.

Some would say that the best treatment for such a weakness in the body politic is an election, but as the next one approaches, I find myself returning to Tocqueville’s darkest reflections:

It is in vain to summon a people, which has been rendered so dependent on the central power, to choose from time to time the representatives of that power; this rare and brief exercise of their free choice, however important it may be, will not prevent them from gradually losing the faculties of thinking, feeling, and acting for themselves, and thus gradually falling below the level of humanity.

And we might add, falling below the level of self-governing adulthood.

In 1777, Thomas Paine issued a rhetorical challenge to colonists anxious about the wisdom of separation from England: “To know whether it be the interest of the continent to be independent, we need only ask this easy, simple question: Is it the interest of a man to be a boy all his life?”

Without reference to gender, we would do well to pose the same question to ourselves in our capacity as democratic citizens: Do we really want to run our own government?

[Editor’s note: This article was adapted from You Can’t Be President: The Outrageous Barriers to Democracy in America, by John R. MacArthur. Published by Melville House.]

John R. MacArthur is the publisher of Harper's Magazine. He's the author of The Selling of Free Trade and You Can't Be President: The Outrageous Barriers to Democracy in America.