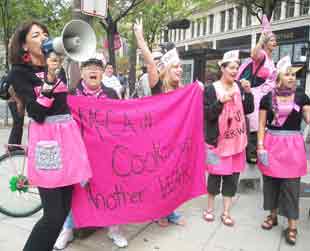 Code Pink has become a lightning rod for contemporary activism - from both the right and left.

At a November press conference at the Heritage Foundation, President Bush singled out Code Pink -- along with what he called "MoveOn.org bloggers" -- for setting a dangerous, radical agenda for U.S. politics.

It’s July in Austin, Texas. I’m wearing an electric pink cape screeching to a milling audience of several hundred who await the appearance of House Speaker Nancy Pelosi (D-Calif.). It’s uncomfortable for many reasons, but I’m a reporter embedded in the antiwar movement. This is my job.

A team of seven rose-hued women surrounds me, all of us yelling in unison. Most of the women are better dressed, at least as far as the occasion calls for – hooker boots, glittery logos, lassos, tights and masks – and sport heroic monikers like “The Hammer of Common Sense,” “Justicia” and “Voice of the People.”

The lone male with us wears comically short prison grays, oversized plastic shackles and a giant paper-mache head meant to resemble the noggin’ of the president of the United States.

We’re at Netroots Nation, where Pelosi has been invited to respond to audience queries. Tensions had been high since the appearance was announced. Progressives balked online about her refusal to call congressional hearings to impeach Bush, a position she’s doggedly held since the 2006 mid-term elections.

Possibly to quell Pelosi’s discomfort, event organizers took most questions in advance (none of that pesky democracy here!), and demanded the crowd limit “interruptions.” In other words – as some bloggers posited in real time at the event – they wanted Code Pink to keep quiet.

But interruptions came from elsewhere, not from the Austin chapter of Code Pink “Sheroes,” whose members kept quiet for the most part. They formed a silent line across the back of the room in front of the row of video cameras, directly in Pelosi’s line of sight.

Code Pink has come to be viewed as a gaggle of smart but silly women, an unkempt listserv, and a mismatched array of girly accoutrements, housed on Capitol Hill, in a space known simply as the D.C. House.

In 2002, Medea Benjamin, Jodie Evans, Starhawk and Diane Wilson founded the organization, beginning with a four-month White House vigil and joined by 100 dedicated, brightly clad adherents. The group has become a lightning rod for criticism of the antiwar movement – and of contemporary activism.

At a November press conference at the Heritage Foundation, President Bush singled out Code Pink – along with what he called “MoveOn.org bloggers” – for setting a dangerous, radical agenda for U.S. politics. This attitude is also echoed in our supposedly left-leaning media.

Salon.com writer Cintra Wilson calls the group “an eyesore,” not unlike “an irritating children’s birthday party.”

Many activists have privately expressed similar wishes that Code Pink would just go away. As one well-dressed lefty confided to me in Austin after I’d stowed my cape: “Crap. Code Pink.”

The criticisms slung at Code Pink hint toward sex, class, race and age biases still harbored in the political left. The middle-aged, upper-middle class white ladies who have traditionally made up the group’s core might seem better placed at the heads of kindergarten classrooms or behind the desks of libraries.

The underlying sentiment: ‘What could they possibly have to complain about? They are white! They are comfortable!’

For starters, they have much to opine about: a tanking economy, an illegal war, and a stripping of our constitutional rights. In fact, these middle-aged ladies are using their positions of comfort for the public good, agitating not for better coffee at PTA meetings, but for an ousting of military recruitment facilities from school campuses.

“These ‘middle-aged ladies’ are my daily inspiration,” Code Pink Campaign Manager Dana Balicki explains. And she’s in her 20s. “I’ve witnessed women go from total discomfort with e-mailing to organizing local protests using Facebook and creating their own action blogs, leaving photos and YouTube videos in their wake.”

Code Pink’s D.C. House mama, Desiree Fairooz, joined the group two years ago because of “the creativity, the ‘in-your-face’ tactics, and the persistence,” she says.

You might have seen photos of Fairooz in the media – images of her with her hands covered in blood, confronting Secretary of State Condoleezza Rice about war crimes.

Since last spring, Fairooz led a Code Pink team to Capitol Hill every day for a year to call for votes against a $165 billion Iraq War budget increase, which Congress passed in May. It’s a defeat that still stings.

“This is only the most recent, and perhaps most egregious betrayal,” says Medea Benjamin. “It was so obviously a political ploy to avoid another vote on war funding before the November elections.”

Even Sen. Barack Obama’s recently proposed timeline to pull out of Iraq hasn’t slowed Code Pink. Because of his pledge to shift focus onto the war in Afghanistan, the group has a new, secret campaign that will kick off after the election.

Code Pink often has in place five or six campaigns – aimed at avoiding war with Iran, shifting Obama to the left or decreasing dependency on fossil fuels. Three or four campaigns dominate weekly staff conference calls. Another three or four sit on the backburner, occasionally reconsidered – or “pinked up” – for public view.

On June 13, when a Berkeley, Calif., counter-recruitment campaign became heated, some Code Pink protesters responded to the rising temps by, well, taking off their shirts. “Breasts not bombs,” they explained to passersby and to the police who arrested them. (A later protest successfully shut down the station.)

But it’s moments like this when the group becomes known as an empty brand instead of a change-making movement.

Benjamin is quick to acknowledge failures: “The war is still raging in Iraq and Afghanistan, there are millions of Iraqis who are refugees and displaced – we have not been successful in getting more funds to help them – Guantánamo has not been closed, FISA was passed, and on and on.”

The Bush administration’s sway over media must cause us to question the depictions of the antiwar movement. The media did, after all, send us to war without due diligence – and told stories based primarily on the accounts of embedded reporters.

Other successes are just as personal. D.C. House volunteers tell stories of congressional security guards who whisper appreciation that the group continues to make its presence – and demands – felt on the Hill.

Benjamin points to larger victories: “The Democrats taking control of Congress in 2006 due to the antiwar sentiment; Obama winning over Hillary because of his stance against the war [and] the new growing consensus on the need for a timeline for withdrawal. … And so far, the fact that the U.S. military has not invaded Iran.”

Still, what gets attention – even among our liberal media – is the girly color.

“Code Pink is about reclaiming the richness of femininity and power,” Balicki says, “which is harnessed in our general distaste of the color that, for many, represented all things typical, subdued, appropriate, predictable, simple and reasonable – values most of us struggled to leave aside.”

She adds: “Once you march with 10,000 women in pink around the White House, the color never looks the same. Neither do you.”

Anne Elizabeth Moore is author of Unmarketable: Brandalism, Copyfighting, Mocketing and the Erosion of Integrity (New Press, 2007), the founding editor of the Best American Comics series, and the former editor of now-defunct Punk Planet. She teaches at the School of the Art Institute of Chicago.