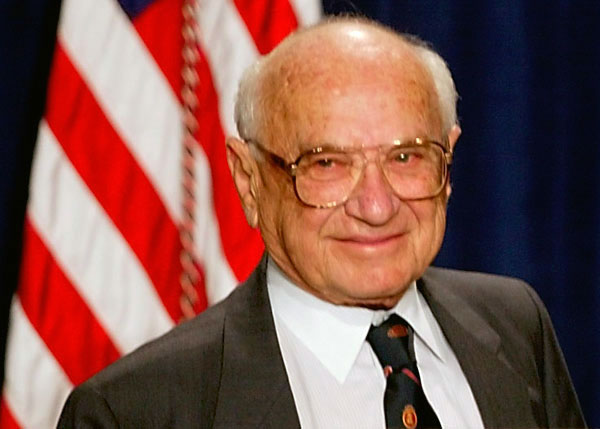 Milton Friedman was honored by President George W. Bush on his 90th birthday in May 2002 in Washington D.C.

Many professors fear that the MFI would resemble the Hoover Institution at Stanford University, a right-wing think tank attached to a respectable university.

In the wake of the massive Wall Street meltdown, laissez-faire economic theories seem increasingly quaint. But the University of Chicago wants to keep the flame of neoliberalism alive.

In May, the university announced plans to honor the late economist Milton Friedman by establishing the Milton Friedman Institute (MFI). Friedman – who died in 2006 – taught at the University of Chicago from 1946 to 1976, and was one of the leading lights of the right-leaning “Chicago School” of economics.

However, more than 100 faculty members have signed a petition objecting to the MFI. The group of dissenting professors calls itself the Committee for Open Research on Economy and Society (CORES). CORES will make its case against the MFI at a faculty senate, a rarely held assembly of the entire faculty to be held this fall.

Yali Amit, a professor in the Departments of Statistics and Computer Science and one of the petition’s signers, cites several broad objections to the proposed institute. The most basic complaint involves the MFI’s name. According to Amit, Friedman, the Nobel laureate and accomplished technical economist, “cannot be disentangled from Milton Friedman, the right-wing ideologue.”

As an academic, Friedman promoted monetarism, a school of thought that advocates limiting the government’s role in the economy to the central bank’s control of the money supply. He also helped shape the current understanding of the relationship between inflation and unemployment, and the phenomenon known as stagflation – inflation plus stagnant economic growth. However, it was Friedman’s career as a right-wing, anti-government pundit that made him renowned.

One of his main principles was that free-market capitalism is the handmaiden of liberal democracy. But the most famous implementation of Friedman’s ideas occurred in Chile, under the jackboots of the brutal military dictatorship that seized power in 1973. Although he expressed perfunctory opposition to the regime’s human rights abuses, Friedman met with its leader, Gen. Augusto Pinochet, and lectured in Chile during the years of oppressive military rule. Several prominent Friedmanites – known as the “Chicago Boys” – took key positions in the Pinochet government.

Friedman’s association with Pinochet is one aspect of his career that troubles members of CORES. Many professors also fear that the MFI would resemble the Hoover Institution at Stanford University, a right-wing think tank attached to a respectable university. The Hoover has been the home to such questionably distinguished scholars as former House Speaker Newt Gingrich, Reagan-era Attorney General and Iran-Contra conspirator Ed Meese, and talk radio host Laura Ingraham.

“Anything that would even vaguely resemble the Hoover would be deeply troubling,” says Bruce Lincoln, a professor of the history of religion at the Divinity School, and a vocal critic of the MFI.

The University of Chicago administration denies that the center’s work will be ideological. But according to language in the original proposal, “the intellectual focus of the institute would reflect the traditions of the Chicago School … [including Friedman’s] critical analysis of monetary policy, and his advocacy for market alternatives to ill-conceived policy initiatives.”

A related concern is that the MFI could become a fundraising tool specifically targeting persons and institutions with a material interest in promoting Friedman’s political agenda. The money for the proposed institute – a staggering $200 million – is to be raised almost exclusively by corporations and wealthy individuals. According to the MFI’s website, persons donating $1 million will become lifelong members of the Milton Friedman Society and will “provide the Institute’s scholars with connections to leaders in business and government.”

Adding insult to injury, the Friedman Institute will occupy what is currently the Chicago Theological Seminary’s historic main building. In a letter to the University of Chicago Magazine, an alumnus suggested that the institute might be re-christened the “Friedman Seminary for Divine Economics,” since the neo-Gothic landmark will be trading one theology for another.

Adrian Bleifuss Prados is a lawyer in Chicago.