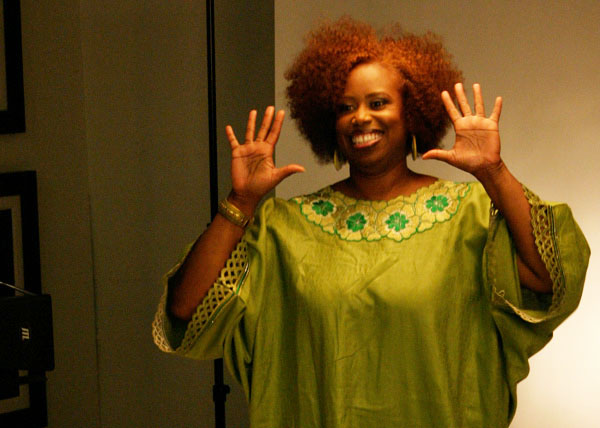 The Green Party’s 5 percent campaign is both modest and ambitious. Can Cynthia McKinney pull it off?

With what this Democrat-controlled Congress is doing, I think it's clear: we have no opposition party in the United States.

During her six terms as Democratic representative for Georgia, Cynthia McKinney gained a reputation for being one of the most controversial members of Congress as she single-mindedly (and often single-handedly) pursued issues like black voter disenfranchisement, U.S. corporate pillaging in central Africa, vanished Pentagon funds, and the Bush administration’s inaction in the face of warnings prior to Sept. 11. As she left the House in 2006, her farewell gesture was to introduce the first articles of impeachment against the President.

The rise of the McKinney/Clemente ticket has been rather dramatic: two women of color―one African-American, the other Puerto Rican-American―nominated by a heavily white-dominated party with which neither has been associated until recently.

Some Greens feel that a candidate with a longer track record in the party would have been a more solid choice, but McKinney’s unofficial ties with the party in fact stretch back to the 2000 elections when she was first courted by Green Party members.

This year, after touring more than twenty states by car to promote her campaign, McKinney won nearly every Green Party primary election, most of them with a broad margin, making her a shoo-in at the Green National Convention in Chicago in July, where she received 324 votes out of 542.

Two weeks before the nomination, I make my way to Midtown, one of the two city centers of sprawling Atlanta, Ga., and on to an industrial area where, nestled in a mass of nondescript businesses, I find the White Diamond beauty salon-cum-art gallery. Here, Cynthia McKinney is spending the day in an extended styling and photo session, and will, I have been told, be available to answer questions during breaks in the schedule.

The soon-to-be presidential candidate is seated in a windowless room under a large hair dryer, still in the before stage of today’s makeover. Perhaps a bit embarrassed in her semi-imprisoned state, McKinney gives off a low-key, homey air, looking more like your aunt treating herself to an afternoon at the beautician’s than the pissed-off, acerbic politician grilling Donald Rumsfeld in Congress.

When McKinney’s stylist is done with her, she emerges wearing a grass green tunic with matching earrings, her hair a vibrant reddish brown. As the Green Queen (as one of her associates instantly dubs her) sits down, I launch my first set of questions.

By which paths did you end up where you are now, running for the office of President of the United States?

My family has always been politically involved. My father was a participant in the civil rights movement and it was impossible for me not to be aware of politics, not to understand the notion of justice, the realities of injustice and the optimism of being able to change one’s situation.

When my father was a member of the Georgia legislature, he had a little beef with one of his colleagues. In the heat of the moment he said, “I will run my daughter against you.” I didn’t know that my father had put me on the ballot, but I didn’t do too badly. Two years later, I ran for the same seat again and won. I only planned to stay four years in the Georgia legislature and my contribution was going to be to make sure that Georgia abided by the Voting Rights Act in its upcoming redistricting process. I became quite notorious because of my aggressive position that my state must abide by federal law and make equal treatment available for black voters.

Then in 1991, when George H. W. Bush decided to bomb Iraq, I stayed up all night and watched the bombs being dropped on Baghdad, and I wrote a speech. The next day, as I delivered it, my colleagues got up and walked out on me. The photograph that was in the newspaper shows just an empty chamber.

What did you say in that address?

I said that none of the seven reasons Bush had given for why the United States should go to war were enough to convince me. I refuted them one by one. Then I said that George Bush ought to be ashamed of himself, and that was when my colleagues began to leave the chamber.

Running for Congress with no money in 1992, McKinney found that the bad press she had received actually attracted people “who wanted Georgia to have a fair political system, and who, like me, did not appreciate the fact that the United States had gone to war.” As a result, she was sworn into the House in 1993 and was re-elected three times. Then, in 2002, she lost to fellow Democrat Denise Majette, a first-time runner. McKinney’s defeat is often put down to voters being upset by her demands for an investigation into the Bush administration’s failure to act on pre-9/11 warnings, demands that made her fair game for the media at the time.

Yet, bad press, partially responsible for bringing her to Washington in the first place, was not the main reason for McKinney’s electoral failure in 2002. As the 2006 documentary film American Blackout documents in considerable detail, McKinney’s loss to Majette was, at least to a large extent, the result of a concerted and aggressive campaign to convince Republican voters to cross-vote. Campaign material distributed in Republican neighborhoods showed McKinney’s face being rubbed out by an eraser, next to the text: “You can get rid of Cynthia McKinney… Ask for a Democrat ballot [and] vote for anyone but Cynthia McKinney.”

The drive was successful: tens of thousands of Republicans voted for Majette and McKinney was ousted. McKinney made a comeback in the subsequent elections but was again voted out in 2006 after a repeat of the 2002 campaign. In the meantime members of the Green Party had begun taking an interest in the contentious congresswoman from Georgia.

What was your impression of the Green Party up to that point?

They were great activists, that was basically all I knew about them. Environmental justice issues were important to me. The zip code of my home happened to be the most toxic zip code in the metropolitan Atlanta area, which was also the blackest. I wanted the House to authorize a study to establish exactly who was doing this polluting, what kinds of permits the state was allowing, and why only in that particular area. That bill didn’t pass, but I presume that the Green Party members figured that I was one of them. And as it turns out, I was one of them.

Looking back, then, why did you stay in the Democratic Party for such a long time?

Because there is no alternative in the state of Georgia, because they’ve made it so hard to get on the ballot. I think Green Party values resonate with the public, but the public just doesn’t know about the Green Party. So the short answer is, there was no choice. In Georgia, if you were going to run for office and win, you had to be either Democrat or Republican.

So what happened? Now you’re running knowing that you will not win.

I have to reject your premise that I will not win. As a minor party, we must define for ourselves what our goals are. We are launching a 5 percent campaign, because if the Green Party is able to cross the 5 percent threshold it gets the legal characterization of a national major party, and gets subsidized by the government in the same way as the Democratic and Republican parties are.

So 5 percent is a victory because, with what this Democrat-controlled Congress is doing, I think it’s clear: we have no opposition party in the United States. The Democratic Party railed against things like funding for the war and the Bush tax cuts that favored the wealthy, but they have done nothing about that now that they are the majority.

I was the only incumbent Democrat in Congress to lose. Why? Because I would have voted against funding for the war. My replacement in the House of Representatives voted to fund the war. Because of what had happened in 2002, they knew how to get rid of me. The bill passed exactly with the required number of votes. If I had been in the House, funding for the war legislation would have failed. One vote, my one vote would have stopped it.

Don’t you feel that it’s a big thing to ask people to vote for someone who is not going to be elected president? Isn’t it asking a lot from people who have just one vote to give?

I think it’s asking a lot of people when you ask them to vote for candidates and parties who don’t reflect their values. Looking at the track record of the Democratic Party, I have to ask, ‘Does this party reflect my values?’ Since the Democrats gained the majority in Congress, they have not addressed a livable wage, they have not repealed the Patriot Act or the Bush tax cuts.

Felix Holmgren is a freelance journalist based in Sweden and Nepal. His work has appeared in Times Literary Supplement, Himal Southasian, Buddhadharma: The Practitioner's Quarterly, The Industrial Worker, The Liberator, and other newspapers and magazines.