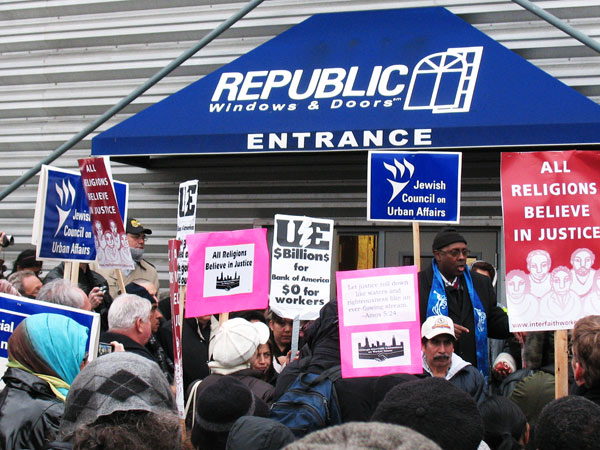 'Now we're an example for many workers, if companies treat them unfairly,' Revuelta said. 'This will change something.'

Echoing the direct action workers took in the Depression to win unions, the 260 members of the United Electrical Workers Local 1100 began occupying the Republic Windows and Door factory in Chicago on Friday, Dec. 5, to protest its abrupt closing.

Their protest marks the most dramatic response so far from workers to rising layoffs–1.3 million since September, the most for any three-month period since immediately after World War II.

By highlighting failures of the financial system bailout, it also sends a strong message to Congress and the incoming Obama administration that government’s response to the current economic crisis must protect workers’ rights and living standards.

Bolstered by an outpouring of support from political leaders, unions, community groups and the general public, the predominately Latino Republic workers are firm in sticking with their well-organized factory occupation.

“We are not going to move until we receive our benefits and severance pay we’re owed,” says union chief steward Sergio Revuelta.

Family-owned Republic, which reported a recent sharp drop in sales of windows for new homes even as its equally important replacement window business remained strong, failed to give workers legally required advance notice of the shutdown–60 days under the federal Worker Adjustment and Retraining (WARN) act, which is extended to 75 days under Illinois law. Republic only notified workers of the closing on Tuesday, Dec. 2.

The union says the company owes workers more than $1 million in vacation pay and wages for the required notification period, but Republic says that it can’t pay them. Also, although workers say Republic promised to pay for their health insurance through Dec. 15, they discovered on Monday, Dec. 8, that Republic had canceled the insurance the night before.

Company representatives blamed the hasty closing and failure to provide WARN protection on the Bank of America’s refusal to extend credit to Republic for an orderly closing. Bank of America, now being taken over by Merrill Lynch, received $25 billion from the federal TARP (Troubled Assets Relief Program) funds. The bank subsequently invested $7 billion in China Construction Bank.

On Tuesday, Dec. 9, Bank of America finally offered to extend a ‘limited amount” of credit to cover Republic’s closing costs, but the union said no satisfactory deal had been reached.

Meanwhile, the former chair of the Illinois Manufacturers Association says that many manufacturing companies face similar problems as Republic in getting credit, even though the bank bailouts were intended to prevent a credit freeze and keep Main Street businesses operating.

The Republic workers’ action unleashed a wave of public support for the workers’ demands, most notably from President-elect Barack Obama. On Monday, Dec. 8, the day before he was arrested on a federal indictment for trying to profit personally from appointment of a U.S. Senate successor to Barack Obama, Illinois Gov. Rod Blagojevich ordered state agencies to stop doing business with Bank of America. Members of the Chicago City Council and Cook County Board proposed similar action. Illinois Attorney General Lisa Madigan is also investigating the shutdown.

At a wintry rally on Saturday, a couple hundred supporters from dozens of unions and community groups rallied with workers outside the plant, carrying placards and chanting, “You got bailed out. We got sold out.”

Rep. Luis Gutierrez (D-Ill.), who has brokered meetings of the bank, company and union, told the rally that people had objected to the occupation, saying the workers didn’t own the windows at the factory. “It was their labor that put together those windows,” he said. “Their creativity and commitment to quality products permitted the company to sell those windows. So those windows belong to the workers until they are paid for them.”

Republic’s Chicago plant closing, in any case, is part of an effort to move to a new, lower-wage factory. Workers noticed the company had moved some machinery out of the factory before Thanksgiving, and when they heard about problems with the line of credit at Bank of America, they grew worried about their future. The union had indications for several months that Republic was investigating relocating to Ohio or Iowa.

The UE local at the plant was formed in 2004 after a long battle by workers to oust their union, The Central States Joint Board, which was widely regarded in labor circles as corrupt. Since then the UE has continued to develop strong rank and file leadership, which may have made it possible for workers to occupy the plant, using control of the factory as leverage to press demands.

Although the union stresses its fight for rights under the WARN Act, it would also like to keep the plant open. UE District Director Carl Rosen argues that Obama’s proposed economic stimulus plan, with its emphasis on making buildings more energy efficient, could be a huge boost to Republic’s replacement window business. “It doesn’t make sense to close this plant when the need is so obvious,” he says.

Indeed, the company’s owners are planning to relocate production. They recently formed Echo Windows & Doors LLC and bought a plant similar to the Republic factory in western Iowa. Workers formerly employed at the Iowa factory were told, according to the Chicago Tribune, that orders were lined up and the workforce would soon be doubled there. But according to Ald. Billy Ocasio, who said he had seen company documents, they would be paid two-thirds less than the Chicago workers.

Adding insult to the injury of the plant closing, in 1996, Republic received a city of Chicago subsidy of $9.6 million to develop its factory in the city’s Goose Island manufacturing district, according to the Chicago Reader.

The Republic factory occupation underscores how pervasively government policy, from local to federal levels, favors business interests with limited or no assurance that workers or the public benefit. And it may signal an escalation of public protest by and for workers’ interests.

“I think it’s time America woke up and saw what’s going on,” says Dave Robinson, a member of the Operating Engineers who came from Wisconsin and was helping unload donated food and Christmas toys for the Republic workers’ families outside the plant. “It’s time we started taking care of our own, standing in solidarity, union or non-union, just people taking care of people.”

Republic workers hope they provide that enlightenment and inspiration.

“Now we’re an example for many workers, if companies treat them unfairly,” Revuelta said. “This will change something. When you’re right and know you are owed something under law, you have to fight to do what’s right.”