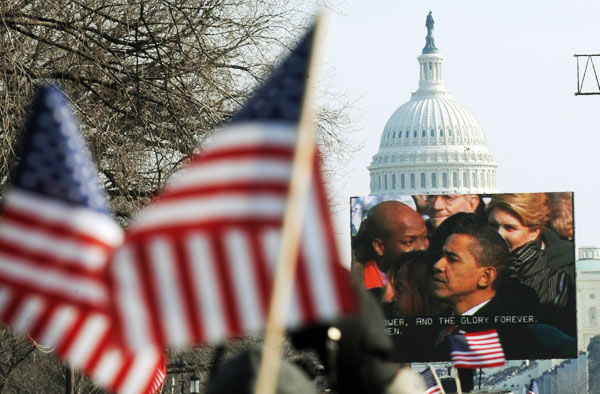 Change Has Come: Scenes from the Inauguration

One man’s quest to glimpse history through the elusive Purple Gate.

“Obama air-fresheners!” shouts one man, holding up a car-freshener in the shape of the soon-to-be president’s face. “Smell like Obama!”

WASHINGTON, D.C.–“Purple!” the crowd shouts, holding up delicately calligraphed invitations and waving them around like billy clubs. “Pur-ple! Pur-ple! Pur-ple!” we chant.

We are standing in a sea of people at Third Street and Louisiana Avenue, inching across the intersection, the thousands of us eventually needing to squeeze through the metal gate that threatens to keep us out of the events, despite our highly prized tickets.

“That is the purple gate,” a man tells us, bewildered by the size of the crowd that has joined him with the same purpose. “But I don’t think most of these people actually have tickets,” he says.

He’s wrong, of course. While we–my sister and sister-in-law accompany me–are among the lucky 240,000 (out of a crowd estimated at 2 million) who have tickets to President Barack Obama’s inaugural events, we are still 240,000 people. Lines snake around every corner.

It is controlled chaos on a very large scale. “I’m actually surprised things have moved this smoothly,” observes another man.

According to TV reports, the mall was filled almost to the Washington Monument by 6 a.m. It is now 10:30, half-an-hour after the ceremonial events have started, and just over an hour until Biden and Obama will be sworn in. And all over downtown Washington D.C., thousands of people are still waiting at the gates, having trekked to various entry points and negotiated the ever-changing rules of crowd control and security–hoping to make it in, and witness history.

6:35 A.M. We leave our hotel, across the Potomac River in Arlington, Va., worried that our opportunity to gain entry to the ceremony has already passed.

The Metro is backed up, so we decide to walk the three miles into town. We start our journey heading down Jefferson Davis Highway, and can’t help noticing the irony of using a road named after the former Confederate leader to attend the inauguration of the first African-American president. What would Davis make of today?

The Mount Vernon Bike Trail takes us along the Potomac, by the Ronald Reagan Airport, to the Arland Williams Bridge. In the distance we can see the promise of the Washington Monument. And as the sun continues to rise, it shines proudly on the Capitol’s dome.

“On your left!” people shout as they speed by on their bikes, many of them heading to the free bike valet set up behind the Jefferson Memorial.

Train horns sound as they make their way from Virginia to Washington D.C., with subway trains following them.

All of the roads appear to be closed, save for emergency vehicles, buses and important-looking limos that pass every few minutes. By the time we cross the Williams Bridge, the buses heading into town are backed up back over the Potomac, all the way to Arlington, and the enormous crowd begins to come into view.

8:05 A.M. There are people everywhere, heading every which way. And police, security, military personnel and red-capped volunteers stand at all corners. A nice but worrisomely under-confident volunteer checks her map and directs us toward the silver gate at the corner of Fifth Street and Independence Avenue. And so we head into the labyrinth of Independence Avenue, along the south border of the Mall.

From the glittery-stenciled “Obama” across a winter cap to shirts worn over heavy jackets that feature Obama’s portrait with the words “Hope,” “President” and “Progress,” the crowd is wearing its enthusiasm. Buttons noting that this is “History in the Making,” and “Barack Obama is the 44th President” adorn the chests and arms and heads of thousands of supporters. In the background, Aretha Franklin and Jon Bon Jovi sing, “A Change Is Gonna Come,” as the concert recorded at the Lincoln Memorial two nights ago is replayed on giant television screens along the Mall. We stand together with thousands of strangers in anxious anticipation, waiting to enter a metal gate.

Then the news begins to come from people on their cell phones, folks discussing the strategy and difficulty of getting into the Mall with various ticket colors. We hear that all streets crossing the Mall have been closed.

We begin to worry about the very possible reality of not being able to enter the restricted perimeter. The difficult prospect of crossing two blocks containing over a million people looms larger with each passing moment.

The ceremony begins in under a half hour.

9:35 A.M. We are joined, through common purpose, by a man with a yellow ticket. He has heard of a magical-sounding underpass a few blocks down whose route could provide access to the other side of the Mall, where our gates are located.

Checking with various volunteers and security personnel for directions as we go, we turn a corner and are greeted by a silver-carded regiment. They stand shoulder-to-shoulder across the street, and two blocks deep. They shout in unison, “Silver! Silver!” as they wave their silver-outlined tickets high in the air, answering a man with a bullhorn who stands behind a wall of police officers at the corner of Independence Avenue and 3rd Street, across the street from the gate where we were denied entrance an hour ago. The silver-carded regiment appears to be preparing for an all-out assault on the silver gate.

Staying to our right, we slowly slink by, climbing over bushes and cement walls on the side of the street. A security person yells, “Get off the wall!” and we jump back onto the trampled grass and trip through the bushes.

Whistles begin blowing rhythmically from behind us, and some sort of conga-like-line makes its way alongside us, led by a few police officers with traffic whistles. People look back in confusion as the pedestrian police-escort leads Samuel L. Jackson near us, and past the silver regiment. We join the conga line and are dropped off two blocks further down the street.

We turn another corner, head down the exit ramp, and are greeted by another line that has extended from one side of the mall, all the way underground to the other side of the mall. It is not moving very fast, if at all.

After a few moments of deliberation, we decide to walk around the back of the Capitol, reasoning that if we were stuck above ground we would at least have a chance of hearing the inaugural ceremony. We bid good luck to our traveling companion, and head off again.

10:25 A.M. Having successfully circled the Capitol, we head down D Street, now on the north side of the Mall, following signs for the Purple Gate.

Street vendors are everywhere, selling anything Obama-related–the soon-to-be president apparently already doing his best to stimulate the economy. There are Obama posters, Obama hats and Obama t-shirts, all for sale for various prices, with various deals possible if you’re willing to buy more than one Obama emblem.

“Obama air-fresheners!” shouts one man, holding up a car-freshener in the shape of the soon-to-be president’s face. “Smell like Obama!”

The street is littered with prospective shoppers and folks with tickets, still rushing to make it to their promised gate. One man wears a jacket with a picture of Obama, complete with superhero cape and “S” on the front of his jersey, slam-dunking a basketball. Above the picture it reads, “The People’s Choice: This is our moment.” The inaugural date of 1.20.09 has found its way onto the altered picture’s game clock; the caption reads “One giant leap for mankind.”

In the distance, a few blocks away, lies the Purple Gate.

11:23 A.M. Finally through the elusive gate, we find ourselves walking through a gigantic bush. The bush is about eight feet tall, and sprawls out with a ten-foot radius. Following our fellow purple-ticketed explorers, the southward sun shines outside of the jungle-like-canopied tunnel. The proverbial light at the tunnel’s end promises an unobscured view of the stage, or at least of the giant television screen.

As more and more people make their way through the giant bush and sandwich in, we stand together, moving our heads from side to side in hope of gaining a better view of the former presidents as they are introduced by the voice on the loud speaker.

“Doesn’t he have a purple ticket?” jokes a man in front of us. “Shouldn’t he be here with us?”

“No. We don’t want him,” answers a woman behind us.

From time to time, folks with other tickets will walk up a few stairs to a bridge in front of us to get to another section, stopping briefly on a platform to look out over the crowd of millions–and inadvertently blocking our view of the giant screen.

One woman in our section somehow makes her way to the platform, explaining to the passers-by that our only hope of seeing Obama rests on the slight view of the screen they are standing in front of. The passers-by move on, and the woman turns to the rest of us, fists raised high in celebration of success. We shower her with exuberant applause.

Moments later more folks stall on the bridge. A policeman stands near them.

“Officer,” we appeal, “move them out of the way!” The policeman obliges, and we shower him with exuberant applause, too.

“Come on now,” someone cautions, “Obama wouldn’t like that.” But it is clear no one in our section minds too much.

Finally, the new first family is introduced, and everyone breaks into rapturous, ecstatic applause.

1:15 P.M. It takes us a fraction of the time to leave the gated perimeter that it took to enter. Walking down the street with hundreds of others, we head in no particular direction, hoping to find a place to eat, warm up, sit down, relax and soak in the historic events of the day.

Above us, a helicopter flies into the soon-to-be setting sun. It carries ex-President George Bush to the airport, where he will board a plane for Texas. The crowd below him waves and shouts for joy.