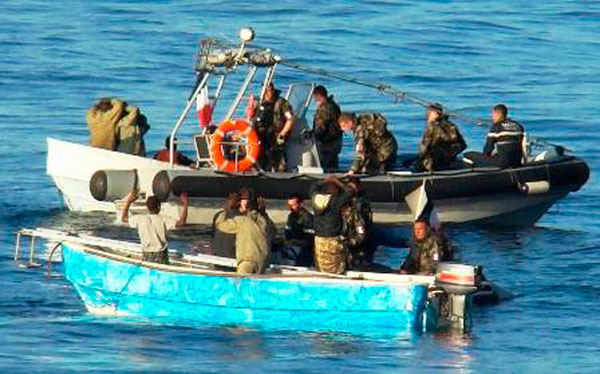 French soldiers arrest presumed Somali pirates in the eastern part of the Gulf of Aden off the Somali coast.

Blackwater Worldwide and other private security firms are taking to the high seas to battle pirates.

In 2008, pirates attacked more than 100 ships off the coast of Somalia, and, as of early January, roughly 15 ships and 250 crewmembers were being held for ransom.

For months, the U.S. Navy has been part of an international coalition patrolling the Gulf of Aden, a busy shipping lane located off the coast of Somalia. About 20,000 merchant ships pass through the region annually, often traveling between Asia and Europe and carrying an estimated 90 percent of the world’s traded goods. Vessels captured in the Gulf of Aden attract, on average, a ransom of $2 million.

Blackwater began offering anti-piracy services in October and reports that it has been in contact with more than 70 companies inquiring about protection. In early December, officials from the North Carolina-based security firm were in London to woo potential clients, including shipping and insurance companies. So far, it has not received any contracts.

Blackwater Spokeswoman Anne Tyrrell says, “interest is definitely there” to hire private firms. “This is a partial solution to a huge problem. When you’re faced with a threat as large as what cargo is faced with today, it has the potential to really cripple world economies,” says Tyrrell. “We see ourselves as ‘gap fillers.’ ”

Blackwater recently retrofitted a 183-foot ex-research vessel–called the McArthur–to carry up to 45 people, weapons and a helicopter. The ship is currently stateside and Tyrrell says she does not know when it will travel to the Gulf of Aden.

“Sending in private military companies that are armed is something that has not been well thought out,” says Nick Davis, a former British army pilot and CEO of Anti-Piracy Maritime Security Solutions, which provides nonlethal maritime security. “The second that we go down there with private military companies and start popping off pirates, they’ll start doing the same.”

Davis says that “99 percent of the time,” pirates–mostly poor fishermen–fire warning shots. “They do not aim to take you out, they do not aim to kill you. But as soon as they discharge a weapon, you legally would be able, in self defense, to return fire. Nobody that would pick up a weapon for Blackwater would ever fire a warning shot. They would probably just go straight for the kill.”

Aside from Blackwater, other for-hire forces are also looking to cash in from the crisis. Mississippi-based private security company HollowPoint Protective Services and Britain’s Hart Security have reportedly shown interest in providing guards and recovering seized ships.

“My perception all along has been–It’s all about a show of force,” HollowPoint CEO John Harris said on Wired magazine’s website on Nov. 25. “They [the pirates] are looking for something they can pick off and move on to the next target.”

Among private contractors, Blackwater could become the largest and most heavily armed presence in the region.

But outsourcing security has been problematic, as evidenced in Iraq. In December, the Justice Department indicted five Blackwater employees in the 2007 shooting deaths of 17 Iraqi civilians in Baghdad.

“Security companies haven’t always had the lightest of touches in Iraq, and I think Somalia is a pretty delicate situation,” Roger Middleton, writer of a recent report on piracy in Somalia for Chatham House, a London-based think tank, told the Associated Press in October.

That delicate situation worsened after Somalia’s president resigned abruptly on Dec. 29. The East African country–nearly the size of Texas, with more than 9 million people–has not had a functioning government since 1991.

Amid chaos on land and sea, Somalia will now have to contend with a new U.S.-backed U.N. Security Council resolution that allows foreign forces to take the fight against Somali pirates ashore. The Dec. 16 resolution states that countries and regional organizations–with advance notice from Somalia’s transitional government to the U.N. secretary-general–“may undertake all necessary measures that are appropriate in Somalia, for the purpose of suppressing acts of piracy and armed robbery at sea.”

But the maneuver could backfire, instead serving as a rallying point for Islamic insurgents battling the weakened government.