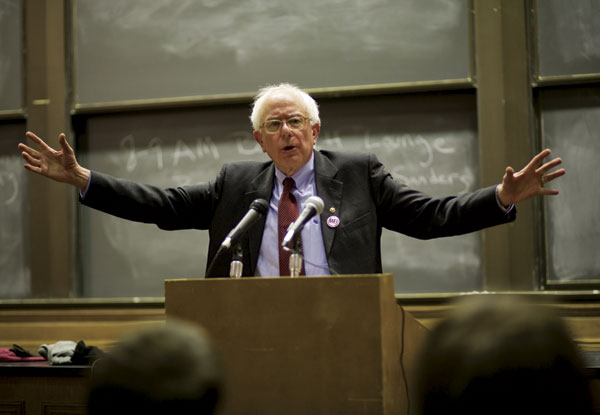 On Dec. 2, Sen. Bernie Sanders (I-Vt.) delivered a speech entitled ‘Milton Friedman’s Legacies: On the U.S. Economic Crisis in response to the University of Chicago creating the Milton Friedman Institute for Research in Economics. In case you can’t guess where he stands on the issue, that’s an anti-MFI button on his lapel. (Photo by David Schalliol)

As Wall Street collapses, so does Milton Friedman’s legacy.

If I went before a town hall meeting in Vermont and asked if people thought it would be a good idea to abolish Social Security, Medicare and Medicaid, people would think I was crazy.

The late Milton Friedman was a provocative teacher at my alma mater, the University of Chicago. He got his students involved with their studies. He was a gifted writer and communicator. And he received a Nobel Prize for his contributions to economics.

But Friedman was more than an academic. He was an advocate for, and popularizer of, a radical right-wing economic ideology.

In today’s political and social reality, the University of Chicago’s establishment of a $200 million Milton Friedman Institute (in the building that has long housed the renowned Chicago Theological Seminary) will not be perceived as simply a sign of appreciation for a prominent former faculty member. Instead, by founding such an institution, the university signals that it is aligning itself with a reactionary political program supported by the wealthiest, greediest and most powerful people and institutions in this country. Friedman’s ideology caused enormous damage to the American middle class and to working families here and around the world. It is not an ideology that a great institution like the University of Chicago should be seeking to advance.

Those who defend the Milton Friedman Institute will assure us that it will encourage a free and open exchange of ideas. That may very well be true. But if the goal of the institute is simply to do non-ideological research, there are a lot of names that one could come up with other than that of the most polemical and ideological economist of his time.

My suspicions only deepen when I read on the University of Chicago website that donors who contribute more than $1 million to the project will have a special relationship with the Institute as members of a Milton Friedman Society and will be expected to facilitate the institution’s “connections to leaders in business and government.”

Maybe I’m being cynical and maybe these big players who are kicking in millions for the Milton Friedman Institute are merely interested in promoting open academic discussion and research. Maybe that is the case.

Frankly, I doubt it.

The timing of this project is a little ironic. Friedman earned his bread by denouncing government at virtually every turn. He, like his acolyte, former Federal Reserve Chair Alan Greenspan, believed that a largely unregulated free market constituted the most superior form of economic organization imaginable. Well, the tune of the right-wing free marketeers has changed a bit in the last few months.

My colleagues in the Senate and I are now picking up the pieces of a banking system brought to the edge of collapse by this theory of deregulation and by the insatiable greed of a small number of wealthy financiers playing in the market and engaging in incredibly risky–if not illegal–behavior.

In the rush to bail out Wall Street, we saw President Bush, Treasury Secretary Henry Paulson, the people in U.S. Chamber of Commerce and the Business Roundtable–folks who loved Friedman’s ideas and who, no doubt, would be prepared to financially support a Milton Friedman Institute–reverse their longstanding rhetorical opposition to government intervention.

Instead, they demanded that we come to the rescue of the financial firms that had lined up in front of Congress for their emergency welfare checks.

For years, all of these people, including the president of the United States, have been telling us that government should not be involved in ensuring healthcare for all Americans as a right of citizenship. (‘What a terrible idea!’)

Well, it turns out that when the shoe is pinching their foot, they have become the strongest believers in government intervention–especially if working people and the middle class are bailing them out.

But the issue here is not just economic policy. It goes deeper than that. It touches on the core of who we are as a society and as a people. Are we as human beings supposed to turn around and not see the suffering that so many of our brothers and sisters are experiencing? Are we content to be living in a nation where, thanks in part to the Friedmanite ideology, the richest 1 percent owns more than the bottom 90 percent and the top one-tenth percent owns more than the bottom 50 percent?

Should we ignore the reality that under Bush, more and more billionaires were created in a period when we had, by far, the highest rate of childhood poverty in the industrialized world? Some 18 percent of our kids are living in poverty and we are shocked that we have more people in jail than any other country on earth, including China. Are we supposed to ignore those realities?

With all due respect to the late Milton Friedman, his economic program is nothing more than a wish list for the greediest, the most monied interests in our society. At the same time that this ideology is supported by the rich and powerful–except when they’re lining up in Washington for their welfare checks–this same ideology is almost unanimously opposed by working families and middle-class people across this country.

If I went before the people in a town hall meeting in Vermont and asked for a show of hands of how many people thought it would be a good idea to abolish Social Security, Medicare and Medicaid, people would think I was crazy. Not one person in a hundred would support that idea because it is so patently absurd.

Even in the case of conservative Republicans, no GOP candidate would ever run on a platform of abolishing Social Security, Medicare and Medicaid. They may attempt to abolish these programs while in office, but they will never discuss that agenda on the campaign trail.

What would some of the items on Friedman’s wish list be? First of all, the Friedmanites would be supportive of the concept of a culture of greed. They want people making billions of dollars on the covers of Time and Newsweek because these people are supposed to be our national heroes. We are not supposed to recognize a teacher who makes $40,000 a year opening up the minds of young people. We are not supposed to recognize a childcare worker who makes $18,000 a year giving poor children an opportunity to grow intellectually and emotionally. Those jobs are not considered important work.

But if you’re a billionaire on Wall Street creating exotic financial instruments that end up being worth nothing, you are considered a hero. The fact that this culture of greed has permeated our political culture means that corporate CEOs can now earn more than 400 times what their workers earn without fearing a political backlash.

This wish list for the rich would include having the wealthy pay as little as possible in taxes. It would include the destruction of the American labor movement, abolishing the minimum wage and doing away with regulations that ensure workplace safety and keep our food and products safe.

Now we have a case study for what happens when the ideology of Milton Friedman becomes the operating ideology of the government. Under Bush, the median family income has declined by thousands of dollars. Millions of Americans have entered the ranks of the poor. Some 7 million have lost their health insurance. Some 3 million have lost their pensions. And the gap between the very rich and everybody else has grown much wider.

Right-wing economists have argued that we can simply trust wealthy people and large corporations to do the right thing. Recent history has demonstrated what a silly idea that is.

Our country is due for a transformation. We have endured years of right-wing ideology and we are eager to move in a different direction. I believe that we will see a major reordering of social and economic priorities, and that this last general election represented a repudiation of right-wing economic arguments.

We will see the day when healthcare is a right of citizenship in the United States.

We will see a U.S. withdrawal from Iraq and an understanding that never, ever again can we allow an administration to manipulate and deceive its way into a war.

Our role as progressives is to remind our country that alternatives are possible, that social democratic movements in Northern Europe and elsewhere have secured universal access to quality healthcare and have effectively abolished the kinds of poverty and homelessness we see in our society. This will not happen on its own: it will require popular engagement and organization. But the changing political landscape has provided us with an opportunity to advance the cause of social and economic justice.

In the Bush era–a period in which some of Friedman’s greatest admirers managed the U.S. economy–the top 400 families in this country saw their wealth increase by $670 billion.

Yet we have children in this country who have no healthcare, children who are undernourished and children who sleep out on the streets. From an economic perspective, from a moral perspective and from a philosophical perspective, the ideology of Milton Friedman is dead wrong. And the University of Chicago is making a serious mistake in establishing a new platform for its failed ideas.