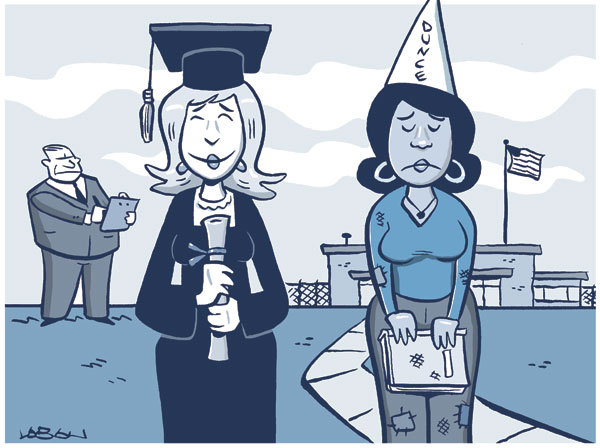 No Child Left Behind demands equal test scores from neighborhoods with unequal incomes and resources.

‘It’s no coincidence that the schools that are failing are in the harshest neighborhoods. There are no street lights, no police. It’s filthy, there are drug addicts and prostitutes walking the streets.’

The students at Miami Edison Senior High School in Florida “fail” every day. Edison is a textbook example of the struggling urban school: dismal test scores, high dropout rates, a reputation for violence and a largely poor, black student body.

So, it was no surprise when the Florida Department of Education gave Edison a grade of “F” for the 2007-2008 school year–a designation that, under the federal dictates of No Child Left Behind, is supposed to compel the school to revamp itself.

But current senior Tranette Myrthil sees the government’s report card as part of the failure. The school “reforms” the state has handed down are squeezing out the things that make education meaningful for her.

Myrthil relished reading in English class, and is frustrated that her class spent so much time drilling for the FCAT (Florida’s multiple-choice reading test), instead of delving into more novels. In the end, she got a 10th-grade reading score of two (on a scale of five)–a grade that she says “doesn’t speak for me.”

After seven years of the Bush administration’s landmark education law, No Child Left Behind, a disconnect remains between the educational demands imposed on students like Myrthil, and what Myrthil wishes she could demand from her education.

The premise of No Child Left Behind, passed in 2001, sounds basic enough: ensure that children from all backgrounds attain a quality education from good teachers. But the debate over how to reach that goal is fractured by ideology, bureaucracy and entrenched barriers to opportunity.

Education was a side issue in the presidential race. But after getting mired in political gridlock throughout the Bush era, activists hope the Obama administration will recast the debate on how to make public schools work for all communities.

Under No Child Left Behind, schools that consistently miss yearly targets for reading and math improvements and other criteria may be hit with strict sanctions. Reform measures could range from private tutoring to full-scale state takeover or conversion to a charter school. For the past few years in Miami, Edison’s teachers and administrators have worked under government mandates to boost student performance by dramatically restructuring programs and staff.

School systems in Washington, D.C., New York City and other areas have floated initiatives to weed out supposedly incompetent teachers or to tie pay scales to staff performance. Obama’s pick for education secretary, Arne Duncan, is seen as a moderate but gained prominence as head of Chicago Public Schools by pushing for the closure of underperforming schools and boosting charters.

But progressives in the education community question conventional notions of “achievement” and “failure.” To Mildred Boveda, a special-education teacher at Myrtle Grove Elementary School in Miami Gardens, Fla., the obstacle to real change is the confinement of the school policy dialogue within classroom walls.

“It’s not a coincidence that the schools that are failing are in the harshest neighborhoods. There’s social issues that are going on,” she says. The crisis in schools parallels other community problems: “There are no street lights, there are no police. It’s filthy, there are drug addicts and prostitutes walking the streets. You’re going to tell me that that’s not going to affect teacher morale, student morale and then student performance–then you’re kidding me.”

Smarter than the test

Edison’s students aren’t the only ones in trouble. According to 2007-2008 state data compiled by Education Week, nearly 30,000 schools missed “adequate yearly progress” benchmarks. For 2007, while a large portion of all students fell short of state proficiency levels in reading and math, failure was especially prevalent among low-income, black, Latino and Native American students.

At Edison, the political frenzy over standards translates into a disengaged classroom. Myrthil says that while her reading score left her discouraged about the system, some fellow students, faced with repeated failures, don’t even attend class anymore.

“Knowing that you’re smarter than what this test is saying–but you still can’t pass it–it makes you feel angry and frustrated,” she says.

Meanwhile, schools are hurtling toward No Child’s key deadline–all students at grade-level reading and math proficiency by 2014.

Teachers, critics warn, are pressured to align curricula with tests, in turn sapping resources from subjects like music and art, and undermining educational approaches based on critical thinking and dialogue.

For progressive educators, the stiff bureaucracy of the testing establishment runs counter to both students’ interests and teachers’ aspirations.

“I’m glad the principals are paying attention to what students aren’t gaining, and what we are going to do to make sure that they can gain,” Boveda says. “But at the same time, I wish there was more than just that state test.”

High-stakes tests tend to demoralize rather than motivate, she says: “Students and teachers get physically sick. That’s how much we want to prepare for this test. But it’s like the whole thing is set up for you to fail, anyways.”

One looming concern about test-based accountability systems is that they might actually drive schools to dilute or erode standards–dumbing down tests, for example, or easing the credentialing process for teachers. In a recent University of Chicago study, researchers linked high-stakes test schemes to a pattern of shortchanging underserved students: teachers would concentrate on students most likely to reach proficiency, potentially leaving struggling kids, who need the most help, to fall further behind advantaged peers.

JoEtta Gonzales, director of Equity Alliance at Arizona State University, one of 10 regional equity assistance centers for schools nationwide, says that in principle, the standards themselves are not harmful, but “it’s the instructional practices that are failing the communities.”

In racially and economically marginalized communities, she says, “one of the things that’s being left out is adapting and modifying the curriculum so that it’s culturally responsive, and that it incorporates the learning interests of the students that they’re teaching.”

Mark Simon, national coordinator of the Tom Mooney Institute for Teacher and Union Leadership, a pro-union reform group, says test-based programs don’t encompass the intellectual challenges students will face in the real world. “There has to be a shift,” he says, “toward learning how to think, learning how to problem-solve, and learning how to grapple with information that you’ve never seen before and make sense out of it.”

In Miami, Myrthil is far removed from the school reform debate in Washington, but nevertheless grasps the root causes behind her school’s crisis. Last school year, she worked with classmates to explore educational quality as a civil rights issue in Project POWER–Promoting Our Will through Education and Research–an action-research initiative at Edison that engaged youth as education researchers and advocates. Myrthil realized that students in more affluent areas had access to tutoring, arts programs and other enrichments that are nowhere to be found in her school’s community.

Though No Child Left Behind’s testing fixation alienates many educators, the nationwide collection and analysis of test data under the law has fueled advocacy around racial and economic disparities. Still, education activists say the harsh mandates leave schools without the funding or flexibility needed to confront systemic inequities.

No Child’s statistics underscore the blight of school segregation, says John Beam, executive director of Fordham University’s National Center for Schools and Communities. But ultimately, he says, “I don’t think we’ll have better public schools until we’re willing to take on institutional racism in our urban school systems and to be serious about the inequitable distribution of resources that it causes.”

Richard Kahlenberg, a senior fellow with the liberal Century Foundation think tank, suggests economic integration can alleviate school disparities, chiefly by expanding No Child’s school transfer provisions. The idea is to allow students to move from failing schools to better ones–typically in higher-income communities that provide better teachers and other academic supports.

“Probably the single best thing you could do for a low-income student is give her a chance to attend a middle-class school,” Kahlenberg says.

Yet reformers taking a long-range view contend transfer programs will not truly equalize a system that lacks the resources to ensure every kid a spot at a quality school. Rather than shuttling students around, they say school policy should focus on building the capacity of underserved communities to educate their children well.

Nikisha Valdez, a social studies teacher at Edison who helped lead Project POWER, says that over time, the school has lost students through transfers, but in many cases, “if the resources were there, if we had the support that we need, we could fulfill that goal for them. It’s really sad, especially when you think of Edison being such a fixture in the community.”

Years after No Child Left Behind promised to transform public education, political discussions still hinge on a basic question: How broadly should the challenge of fixing schools be defined? While the classroom offers a starting point for addressing inequality, not even the best-equipped school can level out the skewed social landscape students go home to each day.

Louie F. Rodriguez, a Florida International University education professor who launched Project POWER, says national policy should empower communities to shape schools from the ground up, through local youth, parents and other stakeholders.

“It would be pretty amazing,” Rodriguez says, “if Obama said, ‘We need teachers that are going to motivate students, that believe in students, that are going to have high expectations for students.’ And then leave it up to the local community people to define what high expectations look like. … We need to fundamentally change the way we do things in our education system by shifting the role that students, educators and communities play in the reform process.”

“If you’re looking for policies that will improve outcomes for kids in low-performing schools, that has to be driven by people who deeply understand public education,” says Stan Karp, a veteran teacher working with the progressive education journal Rethinking Schools. “If the administration relies on social engineering, by people who basically want to break up the public system and blame teachers and their organizations for its problems, then we’re going to have the same kind of fights that we’ve had for the last eight years, and we’re not going to get the progress that we need.”

“Instead of stigmatizing the school and putting more pressure on students,” she says, “let’s talk about the social issues that are going on, within and outside and around the school.”