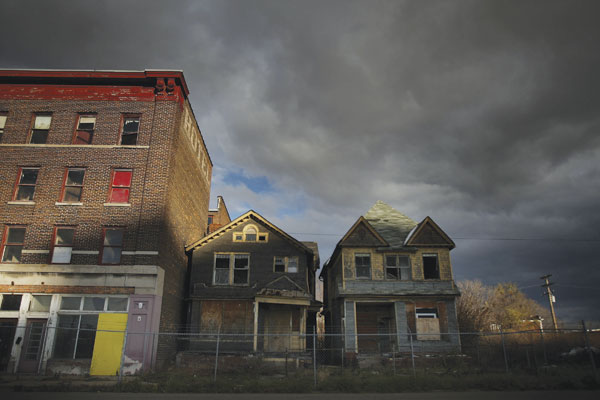 Shuttered homes line a downtown Detroit street. An estimated one in three Detroiters lives in poverty, making it the poorest large city in the United States.

Building a sustainable economy out of the ashes of industry.

Detroit is a city of Hope rather than a city of Despair. The thousands of vacant lots and abandoned houses not only provide the space to begin anew but also the incentive to create innovative ways of making our living–ways that nurture our productive, cooperative and caring selves.

The media and pundits keep repeating that today’s economic meltdown is the worst financial crisis since the Great Depression. But in the ’30s, the United States was an overproducing industrial giant, not today’s casino economy.

In the last few decades, once-productive Americans have been transformed into consumers, using more and more of the resources of the earth to foster ways of living that are unsustainable and unsatisfying. This way of life has created suburbs that destroy farmland, wetlands and the natural world, as well as pollute the environment.

The new economy also requires a huge military apparatus to secure global resources and to consume materials for itself, at the same time providing enormous riches for arms merchants and for our otherwise failing auto, air and ship-building sectors.

Instead of trying to resurrect or reform a system whose endless pursuit of economic growth has created a nation of material abundance and spiritual poverty–and instead of hoping for a new FDR to save capitalism with New Deal-like programs–we need to build a new kind of economy from the ground up.

When I arrived in Detroit in 1953, the population was 2 million, the majority white. Today, it is less than 900,000, majority black. Back then, racism was blatant and overt. Many bars, restaurants and hotels refused service to blacks. Blacks could buy homes in inner city neighborhoods but could not rent apartments in buildings right next door to these homes.

Meanwhile, freeways were enabling white flight to the suburbs, and technology was replacing human beings with robots.

In 1973, we elected our first black mayor, Coleman Young. Young was a gifted politician who was able to eliminate the most egregious examples of racism, especially in the police and fire departments and City Hall. But he was unable to imagine a post-industrial society. So, for 14 years, he tried in vain to woo industrial jobs back to Detroit.

In 1988, toward the end of his fourth term, Young decided that the factories weren’t coming back and that Detroit’s salvation depended on casino gambling, which he said would create 50,000 jobs.

To defeat his proposal, we organized Detroiters Uniting, a coalition of community groups, blue-collar, white-collar and cultural workers, clergy, political leaders and professionals.

Our concern was with how our city had been disintegrating socially, economically, politically, morally and ethically. We were convinced that we could not depend upon one industry or one large corporation to provide us with jobs. It was now up to us–the citizens of Detroit–to create meaningful jobs and income for all citizens.

We needed a new kind of city where citizens take responsibility for their decisions instead of leaving them to politicians or the marketplace.

In 1992, to introduce this civic vision, we founded Detroit Summer, a multicultural, intergenerational youth movement and program to rebuild, redefine and respirit Detroit.

People were moved by the image of young people and elders reconnecting with one another and with the Earth. The result has been an escalating agricultural movement: neighborhood gardens, youth gardens, church gardens, school gardens, hospital gardens, senior independence gardens, wellness gardens and Kwanzaa gardens.

Capuchin monks have created Earthworks, a program that uses gardening to educate Detroit school children in the science, nutrition and biodiversity of organic agriculture, as well as to provide fresh produce for the Capuchin Soup Kitchen and for WIC (Women, Infants and Children) supplemental nutrition program.

At the Catherine Ferguson Academy–a public high school for pregnant teens and teenage mothers–students raise vegetables and fruit trees and grow alfalfa to feed the small animals that provide eggs, meat, milk and cheese for the school community.

Architectural students at University of Detroit Mercy produced a documentary called Adamah (Hebrew for “of the Earth”) that envisions how a 2.5 square-mile area on the east side of Detroit could be developed into a self-reliant community with a vegetable farm, a tree farm and a sawmill to produce lumber.

Every August, the Detroit Agricultural Network conducts a tour of community gardens. After one such tour, one of my friends, a retired city planner, told me that it gave her a sense of how important community gardens are to a city, how they reduce neighborhood blight, build self-esteem among young people, and provide them with structured activities, build leadership skills, provide healthy food and a community base for economic development.

“I see it as the quiet revolution,” she said. “It is a revolution for self-determination taking place quietly in Detroit.”

This quiet revolution has been preparing Detroiters to meet today’s growing crises of global warming and spiraling food prices.

As writer Rebecca Solnit said in the July 2007 issue of Harper’s, “Detroit is where change is most urgent and therefore most viable. The rest of us will get there later, when necessity drives us too, and by that time Detroit may be the shining example we can look to–the post-industrial green city that was once the steel-gray capital of Fordist manufacturing.”

From my experience with the Boggs Center to Nurture Community Leadership, a nonprofit organization founded in 1995 in Detroit, I have seen and heard many stories of grassroots activities that Detroiters are creating–or want to create.

Because of these inspiring stories, in 2007 we launched the Detroit City of Hope campaign. Our aim was to identify, encourage and promote infrastructure-building initiatives:

•Reinvent work so that it is not simply done for a paycheck but to develop people and build community.

•Reinvent education to include children in activities that transform themselves and their environment.

Working together as neighbors of all ages, we can evolve into the more socially responsible, active citizens we are capable of becoming.

We can begin by organizing ourselves in every city and community to secure a moratorium on foreclosures.

As food prices soar, we can achieve food security and better health by joining the local foods movement.

We can bring the neighbor back to the ‘hood by organizing “skills banks” to exchange goods and services among ourselves.

We can create home-repair teams to fix homes and/or tear down those beyond repair. The Electrical Workers, Carpenters and other unions can dedicate one day a week to work with community groups to rebuild whole neighborhoods, while also training young people in rebuilding skills to help them get jobs and recognize the dignity of work.

Other communities across the country are beginning to create alternative ways of living. In Milwaukee, a renaissance has begun, sparked by the two-acre farm of former basketball player Will Allen, who recently received a MacArthur Genius award. “We have to go back to when people shared things and started taking care of each other,” Allen said recently. “That’s the only way we will survive. What better way to do it than with food?”

These are only a small sample of what is possible once we recognize that a new local and sustainable economy is desirable and necessary.

Creating this new economy starts by accepting that there are no solutions except the ones we imagine and implement.

This article was excerpted from Grace Lee Boggs’ keynote address at the National Lawyers Guild Convention in Detroit on Oct. 16, 2008. For information about the Boggs Center to Nurture Community Leadership, visit www.boggscenter.org.

Grace Lee Boggs is a writer and lifelong activist whose career spans more than 60 years. Born in 1915, she is the author of Revolution and Evolution in the Twentieth Century (with her husband James Boggs), Women and the Movement to Build a New America and Living for Change: An Autobiography.