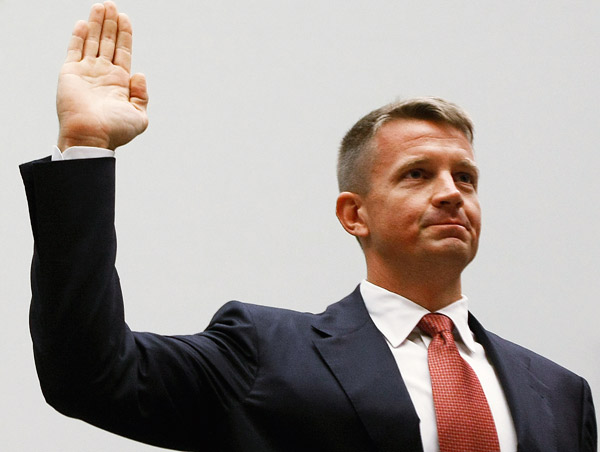 The troubled security firm gets a makeover.

A new logo isn't a novel idea for Blackwater, which in October 2007 removed the crosshairs on its bear-claw logo in an attempt to soften its image.

To distance itself from ongoing controversies, lawsuits and canceled contracts, Blackwater Worldwide, the private security firm known for its mercenary work in Iraq and Afghanistan, has changed its name to Xe (pronounced “zee”).

The company announced this linguistic detoxification after the U.S. State Department refused to renew its contract to protect diplomats in Iraq. On March 2, Blackwater founder Erik Prince resigned as CEO, a move that followed the recent departures of the vice chairman, chief operating officer, president and executive vice president.

In late January, the Iraqi government denied Blackwater a new operating license, after unsuccessfully trying to get the company out of its country since September 2007, when several Blackwater guards killed 17 unarmed Iraqis and wounded 20 more in a crowded Baghdad intersection.

Company spokeswoman Anne Tyrrell told news organizations that Blackwater’s controversies are now in the past. “[The company’s Iraq legacy] is an aspect of our work that we feel we were defined by,” Tyrrell told the Associated Press, which broke news of the name change on Feb. 13.

On Feb. 14, she told the Washington Post, “The idea is to define the company as what it is today and not what it used to be.”

A re-branding effort like this is a desperate measure, says Anne Landman, an editor at the Center for Media and Democracy in Madison, Wis.

“It usually means a company is in pretty deep yogurt,” Landman says. “When they do that, they’re confronted on all fronts: legal problems, public relations problems, how they’re portrayed in the media. They need to jump out of their old skin and into a new one, and hope that we don’t notice.”

As for the name “Xe,” Tyrrell tells In These Times that “it holds no special significance… We thought it had the best potential for brand identity.”

A new name and logo isn’t a novel idea for the North Carolina-based Blackwater, which in October 2007 had changed its name to Blackwater Worldwide from Blackwater USA, and removed the crosshairs on its bear-claw logo in an attempt to soften its image.

But those changes did nothing to quell the public uproar against the company.

Tyrrell tells In These Times that the company will “return to our roots” of military and law enforcement training. She says Blackwater “never wanted to be in the business of private security.” But former company President Gary Jackson told the New York Times in 2004, “I would like to have the largest, most professional private army in the world.”

When asked how many guards Xe currently has in Afghanistan, Tyrrell says, “I can say it’s less than the largest number we’ve had in Iraq…less than a thousand.”

When pressed if it was more than 100, she laughs, saying, “I don’t know. And I probably wouldn’t tell you if I did.”

After its Iraq contract ends in May, Blackwater will likely still have guards in the country.

Since the company has long maintained that its guards are not its own employees, but are instead independent State Department contractors, former Blackwater guards could stay in Iraq by working with Triple Canopy or DynCorp, two private security firms that have valid contracts.

Vague definitions and loopholes in U.S. and Iraqi law could allow guards to continue to act with impunity.

The U.S.-Iraq Status of Forces Agreement, ratified by the Iraqi parliament in late 2008, sought to bring independent contractors under its jurisdiction, but “does not seem to cover State Department contractors,” says Jon Tracy, assistant director of the nonprofit National Institute of Military Justice. “Based on the definition of ‘contractors’ in the agreement, it only covers those that are contracted by the U.S. military.”