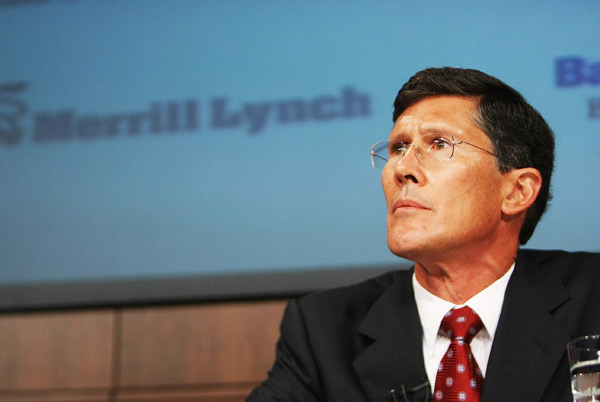 Give CEO Pay the Pink Slip

The furor over executive pay and behavior provides us with an opportunity not just to rein in ridiculous CEO compensation but also to re-make the corporate system.

At the seven biggest financial firms that have recently failed, been sold or been bailed out, top executives have received $464 million in “performance pay” since 2005. And these are the same people who helped create the conditions that led to the worldwide crash. For example, in December 2008, Merrill Lynch CEO John Thain–paid $83 million in 2007–gave out $3.6 billion in early executive bonuses before his firm was taken over by Bank of America, which has received $45 billion in federal bailout money.

In February, in discussing the $500,000 salary cap with limitations on golden parachutes, Obama said, “What gets people upset–and rightfully so–are executives being rewarded for failure. Especially when those rewards are subsidized by U.S. taxpayers.”

During the most recent expansion from 2002 to 2006, for example, the top 1 percent of taxpayers took three-fourths of all income growth, according to University of California-Berkeley economist Emmanuel Saez. And much of it, he says, was due to “an explosion of top wages and salaries.”

Apologists for CEOs argue that companies bid up salaries to get the best executives, who then boost profits and stock value. The cult of the heroic executive imagines that these Lone Rangers solely determine how fast and profitably a firm grows, not the thousands of workers–from secretaries to engineers–doing their daily jobs.

But the differences in performance among executives are tiny–merely 0.016 percent between the performance of the top CEO and the 250th ranked, according to economists Xavier Gabaix of the Massachusetts Institute of Technology and Augustin Landier of New York University.

Gabaix and Landier claim the sixfold growth of CEO pay from 1980 to 2003 tracks the growth of corporate stock market value. But Princeton economist Uwe Reinhardt argues that most of this growth simply reflected the now-deflated general stock market boom, not the uniquely valuable talents of highly paid CEOs.

Indeed, scads of CEOs, like Robert Nardelli of Home Depot, reaped riches as their companies floundered. And overseas, CEOs of large, successful companies typically earn much less. From 2004-2006, top European CEOs received less than half of the $13.3 million that their American counterparts made, on average; top Japanese CEOs received only $1.5 million.

The meltdown in the financial sector demonstrates that these executives had a talent not for strengthening their companies but for enriching themselves. And the public bank bailout has given legitimacy to demands that CEO pay be limited, as Obama modestly proposed for executives of companies that get federal help in the future.

But the public has a legitimate interest in all corporations and how much they pay executives, not just those it bails out. Government created and granted rights to corporations to serve the public interest, and government regulates corporate behavior when it affects the public, such as securities or environmental regulation. Why not CEO pay?

Many corporations rely on government contracts or financial assistance, and taxpayers provide $20 billion a year in direct tax subsidies for excessive executive pay, according to a 2008 study from the Institute for Policy Studies (IPS) and United for a Fair Economy (UFFE).

“Average U.S. taxpayers subsidize excessive compensation–by more than $20 billion per year,” the report says, “via a variety of tax and accounting loopholes. That $20 billion for America’s most powerful is more than double what the federal government spent last year on educating America’s most vulnerable–children with disabilities.”

Supersized executive pay, especially in its typical form, is also a costly burden that distorts the economy away from the common good. It is a symptom of deeper problems with the way corporations and the economy are organized and regulated, argues AFL-CIO chief economist Ron Blackwell.

The foul smell of excess

In theory, corporations pay CEOs the stock options and other bonuses beyond their ample salaries to make sure that they have incentives to maximize shareholder value. But the system is rigged. Company managers effectively control corporate boards and are in collusion with the boards compensation advisers, says Harvard Law professor Lucian Bebchuck.

High executive pay contributes to rising inequality. The payouts for the top five executives at a typical corporation consume about 10 percent of aggregate corporate profits, according to Bebchuck. And at non-union companies, where wages are depressed, the CEOs make 20 percent more than at unionized companies, according to a 2007 survey published in the Journal of Labor Research.

Inequality takes its toll in many ways. It pushed most Americans deeper into debt as they tried to maintain living standards with stagnant incomes, thus weakening consumer demand as a prop for the economy. And it encouraged the rich to speculate. Consumer markets diverged to extremes: Wal-Marts with low-priced imports and luxury boutiques.

Growing inequality in a society increases illness and mortality among the less well off. It creates stress for individuals and tensions for society, thus undermining the ability of the nation to tackle major social issues–especially when inequality increases the political power of the wealthy.

And within a company, inequality undermines teamwork. As a result, argues New York University economics professor Edward Wolff, productivity is depressed, and firms invest less in human capital, or education and skills. That’s why the late management theorist Peter Drucker persistently argued that CEO pay should be no more than 25 times the average worker’s salary.

“The current economic crisis is a direct outcome of the compensation system,” Wolff says.

The compensation system encourages executives to focus on extracting wealth from the rest of the economy, not creating social wealth for the long haul. It distorts the economy, diverting talent from productive to unproductive work: the mathematicians and physicists lured into investment banking could have been working more usefully on research, such as helping build a sustainable energy economy.

As the late economist David Gordon argued, American corporations are less competitive and less productive than their European and Japanese counterparts due to the burden of an oversized corporate bureaucracy. That bureaucracy reflects a corporate strategy of treating workers as costs to be controlled, not essential contributors to corporate success.

Josh Bivens, an economist at the progressive Economic Policy Institute, argues in a new study that unions and blue-collar wages are not hurting U.S. manufacturing, but high corporate salaries are (along with an overvalued currency and dysfunctional healthcare system).

Giving shareholders more control of CEO pay would help, but the public–not just shareholders–has a stake in these decisions. Imposing pay caps–on all executives, not only those at bailed-out firms–would be better. Making the income tax much more progressive than Obama would do with his modest, if welcome, tax reforms is also necessary.

But as Blackwell argues, controlling salaries alone will not fix the underlying problems with the corporate system. We need, he says, to create a new legal and regulatory system that aligns corporations with social needs.

The new corporate accountability, Blackwell says, should involve requiring boards of directors to include major stakeholders – workers, government and communities; instituting collective bargaining laws that shift the balance of power between workers and managers; and creating a public expectation of ethical and socially responsible behavior.

The economic crisis, and the furor over executive pay and behavior, provides us with an opportunity not just to rein in ridiculous CEO compensation but also to re-make the corporate system.

As Wolff says, beyond controlling pay, “a new kind of corporation has to evolve.”

[Editor’s clarification: Thain’s office notes that his 2007 income included $68 million in stock options, which he was unable to exercise because the stock price did not rise to levels designated in his compensation agreement, but obviously fell instead.]