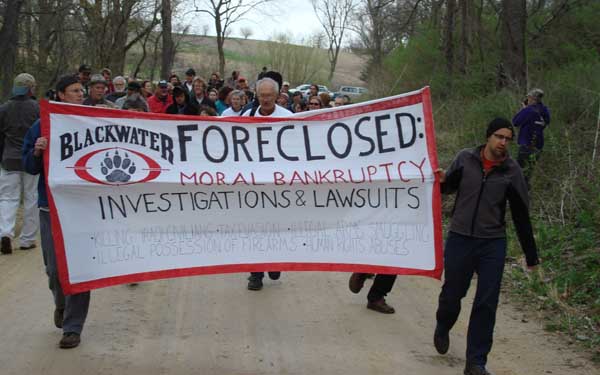 Xe is the Problem

Keeping the corporation formerly known as Blackwater out of Skunk Hollow.

Martin Hippe calls the Xe site a ‘precancerous mole,’ but concedes that most people in Jo Daviess County ‘are more concerned about the impact of the mega-dairy.’

At first glance, it appears that 2009 didn’t start so well for the military contractor Xe, until February known as Blackwater Worldwide. In January, with multiple other lawsuits pending, six of its former employees went on trial for the death of 17 Iraqi civilians in September 2007 in Nisoor Square, Baghdad. And in March, its contract in Iraq, where it has so far made more than $1 billion dollars, was canceled.

Yet, on April 20 the AP reported that Xe (pronounced “zee”) will remain in Iraq until the summer. It has been widely reported that its aviation company, Presidential Airlines, will continue operations in Iraq until the fall. And Triple Canopy, the company that will assume Xe’s contract in Iraq to protect U.S. personnel, will be hiring former Blackwater/Xe personnel.

The private military corporation (PMC) market, of which Xe is a boutique part, is growing globally at 6 to 8 percent a year and has now surpassed $100 billion, mostly based in the United States and the United Kingdom. The use of mercenaries goes back millennia, but the phenomenon of corporate private armies capable of challenging the nation state’s “monopoly on violence”–as President Barack Obama put it–is a late 20th century development that worries peace activists around the globe. These private armies are used not just on the battlefield but also to protect corporations, train public law enforcement personnel and, as after Katrina, patrol city streets.

Mary Shesgreen, co-founder of the Illinois group Clearwater, shares President Barack Obama’s concern about PMCs. But, unlike the President, she believes they should be made illegal. Shesgreen sees their existence as part of the increasing militarization of our society. ”Civilian control of the military is a basic tenet of any democracy. Corporate control, or privatization, is an essentially anti-democratic trend,” she says.

As part of its new incarnation, former Blackwater/Xe CEO, Erik Prince, claimed in his resignation speech that the company plans to focus on its “core” business of domestic security training.

A seeming victory for the anti-Blackwater coalition occurred in March 2008, when the company was forced to abandon its plans to develop an 800-acre training facility in rural Potrero, 40 miles east of San Diego. Raymond Lutz, founder of Citizens’ Oversight Projects (COPs), which monitors the decision-making process of local government entities, was a key organizer of the opposition.

Lutz believes strongly in working with local elected officials who, he says, “on the whole have the best interests of the community at heart,” but he also believes in accountability and uses “net-roots” strategy that includes recording public meetings in order to shine a wider light on the decision making process. COPs successfully recalled the local planning board members who supported the Blackwater site.

Circumstances also were providential: The pent up anger against the war drew demonstrators and garnered press coverage. Environmentalists and local residents who opposed the noise from firing ranges joined forces. Journalist and author Jeremy Scahill chronicled the Potrero victory and insists that its significance should not be underestimated: “Those people … stood up against one of the most powerful paramilitary groups in this country and won.”

Yet while the community of Potrero scored a victory, Blackwater/Xe merely experienced a short-term setback. Hydra-like, it simply popped up in a new guise and a new location. Lutz received a tip less than two months after the Potrero project was abandoned that Xe was seeking permits for a facility in Otay Mesa in the city of San Diego, where it can execute an ongoing training contract with the U.S. Navy and also bid for border security contracts.

In pursuing permits for the Otay Mesa site, Blackwater disguised its application under the names of subsidiaries and broke the project down into several smaller ones to avoid the more intense oversight required for a single large project. The city originally refused Blackwater’s certificate of occupancy, but Blackwater took its case to federal court and Bush-appointed Judge Marilyn Huff sided with the company. Opponents want to stop Xe from gaining legitimacy as a state training organization–the company would like to enter into an agreement with the Southwestern Community College District to offer weaponry training to its law enforcement students.

In Illinois, opposition to Xe has been focused on Skunk Hollow in Jo Daviess County in the northwest of the state. In 2006, Blackwater quietly leased an 80-acre weapons training facility there. (Taking over existing training facilities is another favorite Xe tactic to avoid public scrutiny.)

Opposition to what is now known as U.S. Training Center Midwest began almost immediately, triggered when Dan Kenney, a school teacher from DeKalb, two counties east of Jo Daviess, read about the proposed facility in a short story by the Associated Press.

Kenney was a member of the Confederation of Northern Illinois Peace Groups Coalition, which decided to form Clearwater as part of their focus on war profiteers. Over the past three years Kenney has become one of the groups’ chief strategists.

He spearheaded the first national conference of PMC opponents, held in the small town of Stockton, close to Xe’s U.S. Training Center Midwest, on April 25 to 27. Conference presenters included organizers from North Carolina, California (by video), Scahill and Col. Ann Wright, the 29-year army veteran who resigned her commission on the eve of the Iraq invasion and is now an outspoken activist against the war and PMCs.

On April 27, 75 conference attendees marched to the gate of the Xe’s site to perform a “citizens’ foreclosure” on the company. State police arrested 22 protesters as they rolled under the property gates. The protesters stated that they were “going onto Blackwater’s property to serve a notice of foreclosure on the property of a company that is morally bankrupt.”

It’s been challenging for Clearwater to raise awareness of Xe’s presence in Jo Daviess County. The county has other problems, from contaminated drinking water to a proposed new mega-dairy. Martin Hippe, a concerned local resident, calls the Xe site “a precancerous mole” but admits that most people “are more concerned about the impact of the mega-dairy.”

Clearwater is also pursuing the passage of state legislation to curtail the use of private military contractors to train police forces. “A company that behaves as if it is above the law, should not be training law enforcement personnel,” says Shesgreen. The Illinois State Police opposed a bill by state Rep. Julie Hamos (D) because they did not want to cede the right to get training from the best available trainers, according to Shesgreen. Clearwater’s new draft for the 2010 legislative session would limit the state’s ability to use private contractors, except in case of emergency. But even this is an uphill fight.

If Clearwater’s legislative initiative seems to be temporarily stalled, so too does U.S. Training Center Midwest. When Kenney visited the site in early April–accompanied by 15 Dominican nuns–he says Site Director Eric Davis told him that course enrollment is down and the chances of being certified to offer law enforcement training by the Illinois State Law Enforcement Training Board seem remote. Davis also claimed that Xe’s headquarters in Moyock, N.C., is cutting the staff by 50 percent.

At Moyock, Xe is being monitored by Blackwater Watch, an offshoot of Stop Torture Now, an organization formed to oppose extraordinary rendition flights out of the state. It held the first civil disobedience against a PMC in 2007, simulating the Nisoor Square massacre and has also protested outside the Winston Salem, N.C., offices of Xe’s lobbying firm Womble Carlyle Sandridge and Rice. Christian Stallberg who maintains the Blackwater Watch website says, “I think we have raised the awareness considerably.”

But he concedes that North Carolina’s economy relies on the military. “A lot of people don’t draw a distinction between the military and Blackwater,” Stallberg says. “It’s like a career path: You come out of the military and you’ve not been trained for anything else so Blackwater takes advantage of that.”

Congress is not likely to abolish or limit the power of military contractors. As an alternative, PMC opponents are considering taking the fight to the courts. They argue that use of private contractors in law enforcement violates the Posse Comitatus Act, which forbids the federal government from using the military for law enforcement.

Xe’s year may not be going as badly as it appeared at first, but its opponents say that they are in for the long haul too.

Jenny Tomkins, a member of the In These Times Board of Editors, lives in Sycamore, Ill. She has an M.A. in journalism from the University of Wisconsin and currently works as an interim innkeeper. Her abiding passions are politics, her family, and eating, growing and writing about food.