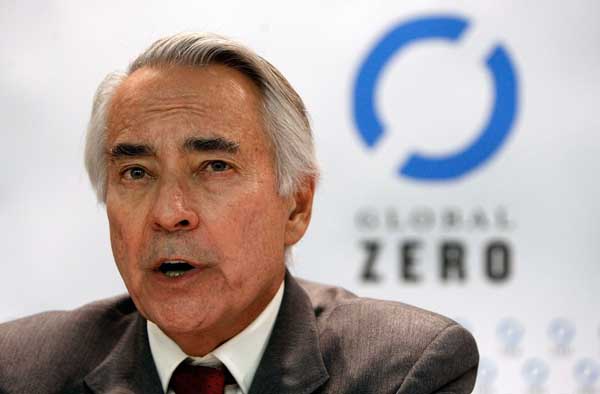 On Dec. 11, 2008, Richard Burt, former U.S. chief negotiator in the Strategic Arms Reduction Talks with the Soviet Union, speaks during the launch of the Global Zero initiative in Washington, D.C. (Photo by Chip Somodevilla/Getty Images)

The Aspiration of Global Zero

President Obama seeks a world without nuclear weapons, but there are signs a key treaty is unraveling.

On April 5, 2009, before a crowd gathered at Hradcany Square in Prague, President Barack Obama declared “America’s commitment to seek the peace and security of a world without nuclear weapons.” With these words, Obama implicitly endorsed Global Zero–a movement founded in December 2008 by some 100 political leaders from around the world to ban nuclear weapons.

Obama’s speech calls to mind the warning of President John F. Kennedy almost half a century ago. Without international agreement on preventive action, he said, there could be 15 to 25 nuclear states in the world by the 1970s, resulting in “the greatest possible danger.” President Johnson, heeding Kennedy’s alert of a dangerous “tipping point,” provided strong U.S. support for the Treaty on the Non-Proliferation of Nuclear Weapons, signed in 1968.

At the heart of the NPT is a bargain between these two categories of states. The non-nuclear states agreed not to acquire nuclear weapons. In return, to prevent a permanent disparity in military power, the nuclear states committed “to pursue negotiations in good faith on effective measures” to work toward nuclear disarmament.

Far more non-nuclear states have given up nuclear weapons programs or reversed their intent to develop them than have become nuclear powers, which is the NPT’s biggest success. Yet, there are ominous signs that the treaty is unraveling, leading the world to another “tipping point” much like in the 1960s. Israel, India and Pakistan–the only states that didn’t ratify the NPT–now possess nuclear arsenals. North Korea withdrew from the treaty and detonated a nuclear device in 2006, using plutonium made by reprocessing spent reactor fuel. Iran continues to enrich uranium, ostensibly for electric power nuclear reactors. But with minor modifications, the enrichment process can be extended to produce weapons-grade material that can be fashioned into a nuclear device.

All signatories have “the inalienable right” to research, produce and use nuclear energy for peaceful purposes. They are allowed to enrich uranium and reprocess spent reactor fuel. And with a mere three months notice, any country can withdraw from the treaty if “extraordinary events” have jeopardized its “supreme interests.” Between 30 and 40 states have the capacity to “breakout” this way and develop nuclear weapons, warns Mohammed El Baradei, director of the International Atomic Energy Agency (IAEA). Unless present trends reverse, he says, there could soon be more than 25 states with nuclear weapons–many unstable and prone to takeover by extremists.

In Prague, Obama committed to a set of concrete steps to strengthen the non-proliferation regime. He pledged to reduce the role of nuclear weapons in U.S. national security strategy and negotiate with Russia to create a legally binding follow-on to the Strategic Arms Reduction Treaty, which expires this December. Obama said that terrorists buying, stealing or building nuclear weapons pose the most immediate and extreme threat to global security, and advocated protecting not just the weapons themselves, but tons of fissile materials spread around the world at sites with inadequate security. As little as 50 pounds of highly enriched uranium is enough to fashion a nuclear device that could easily be smuggled into the United States and detonated.

It wasn’t until 2004 that the United States announced the adoption of the Global Threat Reduction Initiative (GTRI) whose mission is to “reduce and protect vulnerable nuclear and radiological materials located at civilian sites worldwide.” But at the current rate it will take decades to convert or secure pilferable nuclear materials, says former Sen. Sam Nunn, currently the co-chairman and chief executive officer of the Nuclear Threat Initiative. Obama vowed to coordinate with other nations to safeguard nuclear materials in four years.

Obama also proposed two other initiatives in Prague to combat the “breakout” problem. First, a Fissile Material Cutoff Treaty would prohibit the production of materials that can be made into nuclear weapons. Second, a reactor fuel bank under international control–coupled with an enforceable Comprehensive Test Ban Treaty–would minimize the likelihood of more states becoming nuclear powers. Obama also advocated strengthening the NPT, including establishing more intrusive inspections by the IAEA and heavy penalties for irresponsible withdrawal.

But implementing these new restrictions requires cooperation among the nuclear weapons states and the non-nuclear weapons states–a difficult prospect as non-nuclear states get increasingly fed up with the failure of nuclear states to actually “negotiate in good faith” toward nuclear disarmament. Obama’s declaration to seek Global Zero is important for restoring this faith. Nor is his commitment irresponsible. He has pledged that the United States will maintain a credible nuclear deterrent as long as other states possess nuclear weapons.

Global Zero is like a mountain covered at the top by a cloud, Nunn says. The analogy is apt. You don’t know if you can make it all the way up, but it’s important to start the climb.

Robert G. Gard Jr. is a senior military fellow at the Center for Arms Control and Non-Proliferation in Washington, D.C. He is a retired Lieutenant General of the United States Army and a former president of the National Defense University.