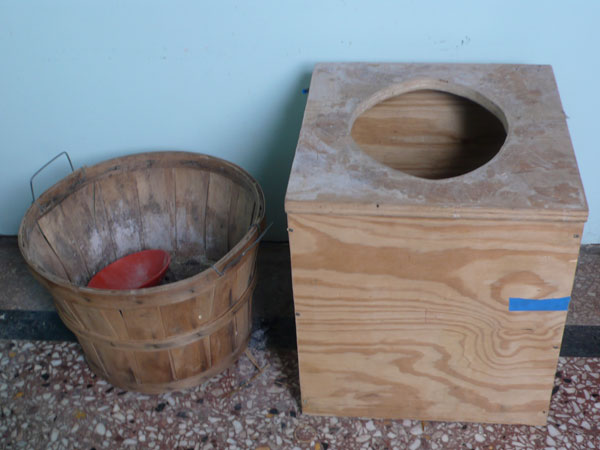 A bushel of sawdust and a low-tech composting toilet used for compost collection.

Your Crap, Our Compost

Squat and the earth shall grow .

A generally fecal-phobic society reacts to the thought with a mix of snickering interest and fearful aversion, all dispatched in a single flush. But Nance Klehm, 43-year-old urban forager and grower, transforms human excrement into nutritious soil one bucket at a time.

“I’m not treating it chemically. I trust microorganisms to do it for me,” Klehm says.

In early 2008, Klehm sent letters and humorous surveys to households in six Chicago neighborhoods, calling on potential participants to help “transform waste into fertility, pollution into resource, and isolation into connection.”

With no need for “Compost 101” instruction, complex machinery, electricity or water, Humble Pile asked its 22 volunteer “nutrient loopers” to opt for dry buckets with snap-on toilet seats when nature calls.

To the surprise of Lora Lode, whose household participates in Humble Pile, her two teenage children Kira and Charlie were the most eager to take part in the minimalist procedure. The family of four made room for a bucket in the bathroom and for storage drums on the back porch of their Logan Square apartment. “I was interested in this as an experiment,” says Lode, who works with artists to combine art, activism and environmental concerns. Her 19-year-old son Charlie is not put off. “I just think that if I didn’t have a house, this is what I would do,” he says.

In place of the routine flush, Klehm supplies the “nutrient loopers” with sawdust to cover stools after each deposit, both to dispel odor and to facilitate composting.

In the summer of 2008, Klehm personally collected the feces from the Lodes and other households and composted the material in 32-gallon drums, stored at a secret location outside the city so as to avoid prosecution for violating ordinances on waste disposal and storage.  ”As an ecologist, I don’t expect law to keep up with me–it’s more important to get this done,” Klehm says.

Nature doesn’t seem to heed law either: Shit happens, and then goes through a two-year-long natural composting process that burps out nitrate-rich soil that smells like wet basement. The soil will cycle back into Chicago gardens, which include a 5,000-square-foot greenhouse at a homeless shelter and several additional gardens scattered throughout the city.

“I’m just interested in people understanding that their body is producing soil all the time,” Klehm says, “and there’s no reason not to return it back to earth.”

According to Klehm, the locally produced Humble Pile compost is as nutrient-rich as sludge “fertilizer” from municipal sewage plants. “Good soil is so hard to have in the city. I’m concerned about the state of our soil–they’re affecting our health, they’re depleted, or they’re contaminated or poisonous,” Klehm says.

Deemed a fertilizer by the Environmental Protection Agency (EPA), the controversial sludge is a concoction of everything that goes down the drain–a heavy-metal laden medley of industrial, pharmaceutical and human waste. (In an attempt at linguistic detoxification, the EPA renamed sewage sludge “biosolids.”)

Klehm’s composting method has another home: an abandoned World War II-era U.S. airbase. In the salt flats along the Nevada and Utah border, Klehm and other artists and researchers of the autonomous living system Clean Livin’ use urine-diverting dry toilets and a combination of composting and dehydration to process their waste for later agricultural use.

Long before Humble Pile, the waste-to-fertilizer process was discovered inadvertently by our nomadic ancestors, who flung waste onto piles that eventually became fertile soil. Later, the Sumerians and Romans hired delivery boys to carry feces in “honey wagons” to nearby fields for fertilization. The Chinese even commoditized “night soil” from wealthier households as a valuable good–the feces of the rich being more abundant in nutrients due to their better diets.

But now, just as the Western commode is making its widespread debut in China, Klehm is showing at least two U.S. communities that there may be a better option than the water-hungry modern flush toilet. Producing soil and fertilizer locally helps conserve energy and water, and whereas the composition of municipal sewage sludge is to a large extent a mystery, what goes into Klehm’s buckets are participants’ own work. What’s more, Klehm ensures that her DIY fertilizer is safe by testing it for E. coli bacteria.

For Klehm, Humble Pile is not a novelty. “I’ve been doing this for four years,” she says. “Other people think it’s crazy. I just accept it as a way of life.”

Sisi Tang, a former student of history, is now a writer and traveler based in Istanbul.