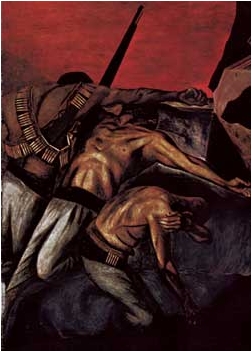 The Fires This Time

BY Christopher Capozzola
Share TweetReddit0 EmailPrint
In 1930, the Mexican painter José Clemente Orozco finished his mural Prometheus at Pomona College in Southern California. Orozco had by then emerged as one of 20th-century art’s most enthusiastic supporters of political revolution—as well as one of its fiercest critics. So it is no surprise that the Greek hero Orozco depicted likewise embodies contradictions. In the ancient myth, Prometheus wraps a glowing ember in a fennel stalk and, against the orders of Zeus, sneaks it out of Mount Olympus to share the secret of fire with humankind.

His gift proved a blessing and a curse; the same flames that warm us can also burn. Orozco knew this all too well. For many years, critics dismissed Orozco’s contradictions as the sign of a politically incoherent painter, but a long-overdue reassessment is now underway, one that recognizes in Orozco’s vision an important critique of the violence of modern life in the Americas.

That Orozco would become a revolutionary artist was not apparent at the outset. Born in the rural state of Jalisco in 1883, Orozco passed a restless childhood in a family of dull bourgeois strivers who nevertheless indulged his early interest in art. An explosion severely injured the young Orozco; he lost some of his sight, much of his hearing, and his left hand. He later said it turned him into an artist by giving him an outsider’s perspective. He enrolled at Mexico City’s San Carlos Academy, where he came under the spell of Dr. Atl, a visionary artist and radical who shared with students his passions for Renaissance frescoes, prison reform, and volcanology. Mexico erupted into revolution in 1910, and by 1915, Orozco had fled Mexico City with Dr. Atl and settled in Veracruz, where he penned caustic caricatures for the radical newspaper La Vanguardia.

Such direct political engagement would not last. The series Mexico in Revolution demonstrates why Orozco never became an artistic soldier in service of the armies of revolution. Here he drew with the simplest and most understated style the heartbreaking terror of everyday life in Mexico in the 1910s; works like Requiem (1928) document the loss of family members. In The Franciscan and the Indian (1926), the anti-Catholic Orozco still conveys the immediacy of clerical charity as the body of the friar curves gently over the head of the Indian supplicant. The best works from this period are his drawings of flowering plants that grow thorns so sharp they cut themselves. That is Orozco’s vision at its clearest, reminding us that revolutions are wars before they are anything else, and wars leave scars.

Orozco stuck around long enough to find a place within the art world of Mexico’s triumphant revolutionary government. Like a generation of Mexican artists, in 1923 Orozco signed up as a member of the Syndicate of Technical Workers, Painters and Sculptors, joining forces with fellow painters David Alfaro Siqueiros and Diego Rivera to depict the revolution’s goals in a new visual language.

Their form of choice? The mural. “It cannot be made a matter of private gain; it cannot be hidden away for the benefit of a certain privileged few,” noted Orozco. Minister of Education José Vasconcelos, sympathetic to this vision, gave the artists all the wall space they could use.

This so-called Golden Age of Mexican art in the ’20s has since been wrapped in many layers of gauzy romantic radicalism. But in fact, artists and the government frequently disagreed over the meaning of the revolution; the artists of the Syndicate rarely got along with one another, let alone with the workers in whose name they claimed to paint. And despite the rhetoric, not all Mexicans embraced the revolutionary agenda, particularly its attack on the Catholic Church. In July 1924, Orozco and Siqueiros, hard at work on murals for the National Preparatory School in Mexico City, found themselves surrounded by an angry crowd who pelted them with rotten vegetables, beat them and defaced the murals. Golden age indeed.

Within a few years, the new president, Plutarco Calles, began consolidating dictatorial power in a divided country that now included the pro-Catholic Cristero Rebellion and the emerging proto-fascist Gold Shirts. The Syndicate disbanded, and Orozco, now out of a job, went off to New York. The city was then in the midst of a fascination for Mexican life and art that made the shy and physically handicapped Orozco into a minor celebrity of the avant-garde.

In New York, Orozco frequented vaudeville shows and Harlem nightclubs and joined in the discussions of the artists and bohemians who gathered at The Ashram, a salon held in a fashionable Manhattan apartment. Here, Orozco explored Eastern philosophies and comparative mythology, an interest that found its outlet in Prometheus. In the mural, the Greek god dominates a fiery landscape; but looking at the suffering mortals below, it’s not clear whether Prometheus’ gift is the cure or the cause of their anguish.

In the United States, Orozco also fashioned an identity that incorporated both Mexican and American aspects. The first time Orozco crossed the border, at Laredo, Texas, in 1917, his art did not make it with him: A U.S. border guard seized nearly 60 of his drawings as “obscene,” in what Orozco later laughed off as “an official showing.” In the more metaphorical sense, though, Orozco’s work crossed borders easily. One of the most striking images from the Mexico in Revolution series was The Hanged Man (1926), a stark drawing of a revolutionary execution. The image first appeared as an illustration in The Underdogs, a revolutionary novel by Mariano Azuela composed in El Paso, Texas, in 1915. Orozco exhibited the drawing in 1935 in exhibitions protesting lynching in the southern states. If violence respects no borders, he suggested, neither should the culture that protests it.

Orozco’s most dramatic vision of a borderless America can be seen in his 1934 murals at Dartmouth College in New Hampshire. Orozco spent nearly two years in residence in Hanover and even helped judge the ice-sculpture contest at the college’s winter carnival. (If you can imagine a cross between the films Reds and Animal House, you’ll have some sense of the bizarre incongruity here.)

His masterpiece, An Epic of American Civilization, tells the history of the Americas as a single story, from the coming of the god Quetzalcoatl to the rise of the modern United States. Orozco refused to go along with the myth of the noble savage at a time when Mexican artists were mining Mesoamerican history, and Georgia O’Keeffe was just one of many U.S. artists poking around the Southwest’s Indian past. Of this type of exoticism, he remarked, “To lean upon the art of the aborigines, whether it be of antiquity or of the present day, is a sure indication of impotence and of cowardice, in fact, of fraud.”

This independence of mind gave Orozco’s mural a unique historical vision: One panel denounces the Aztec practice of human sacrifice, but across the hall stands Modern Human Sacrifice, a depiction of a ceremonial observance at the Tomb of the Unknown Soldier. Prometheus’ punishment was to have his liver consumed by vultures every day, only to have it grow back; society in Orozco’s mural is likewise condemned to repetition.

Orozco left New York in 1934 to return to a Mexico that was once again sympathetic to his politics. In his later murals, fire continued as a central motif. As fascism and war spread across the globe, Orozco’s flames were not only destructive, but nearly apocalyptic. The fiery Guadalajara murals of Man in Flames (1938) and Horses of the Apocalypse (1938) come straight out of hell, offering no hope of redemption. The flames of war sear the walls of his 1940 mural Dive Bombers, a commentary on the outbreak of World War II.

In an alternate telling of the Greek myth, Prometheus brings fire to mortals, but he also brings to the curious young Pandora a box filled with the Spites. In 2002, Pandora’s Spites (old age, sickness, insanity, the Bush family) once again surround us, and the flames of Orozco’s apocalypse look more prescient than his revolutionary fervor. But to see the fire in Orozco’s murals as only a destructive force would be to miss the point completely. For despite his accounts of the violence of American life—ancient to modern, on both sides of the border—Orozco remembered the one thing that Prometheus left in the bottom of Pandora’s box: the glowing ember of hope. That fire still burns in Orozco’s pictures.