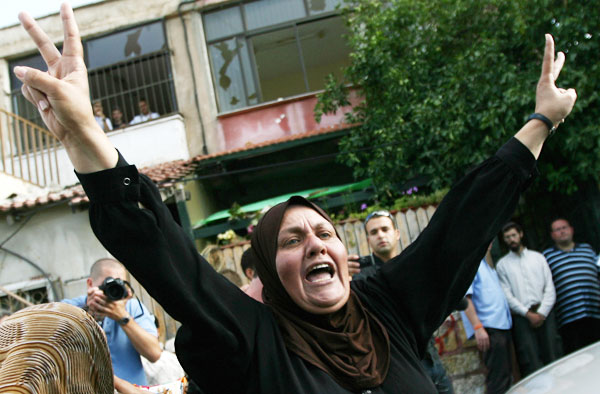 On August 9 in East Jerusalem, a Palestinian woman flashes the victory sign in front of a house whose Palestinian residents were evicted and where Jewish settlers now live. (Photo by Ahmad Gharabli/AFP/Getty Images )

Israel’s Kafkaesque bureaucracy colonizes the occupied West Bank one settlement at a time.

The Israeli side of the wall is painted with the image of the countryside beyond the wall—but without the Palestinian town, depicting just nature, with grass and trees.

On August 2, 2009, after cordoning off part of the Arab neighborhood of Sheikh Jarrah in East Jerusalem, Israeli police evicted two Palestinian families–more than 50 people–from their homes. Jewish settlers immediately moved into the emptied houses. Although Israeli police cited a ruling by the country’s Supreme Court to justify the evictions, the Arab families had been living there for more than 50 years. The event attracted the attention of the global media, but it is part of a larger and mostly ignored process.

Five months earlier, on March 1, 2009, it was reported that the Israeli government has plans to build more than 70,000 new housing units in Jewish settlements in the occupied West Bank. If implemented, the plans could increase the number of settlers in the Palestinian territories by about 300,000–a move that would not only severely undermine the chances of a viable Palestinian state, but also interfere with the everyday lives of Palestinians.

A government spokesman dismissed the report, arguing that the preliminary plans were of limited relevance: The actual construction of new homes in the settlements required the approval of the defense minister and prime minister. However, 15,000 of the planned units have already been fully approved. In addition, almost 20,000 of the planned units lie in settlements that are far from the “green line” that separates Israel from the West Bank–in other words they are located in areas that Israel cannot expect to retain in any future peace deal with the Palestinians.

The conclusion is obvious: While paying lip-service to the two-state solution, Israel is busy creating a situation on the ground that renders a two-state solution de facto impossible. The dream that underlies this politics is best rendered by the wall that separates a settler’s town from the Palestinian town on a nearby hill somewhere in the West Bank. The Israeli side of the wall is painted with the image of the countryside beyond the wall–but without the Palestinian town, depicting just nature, with grass and trees. Is this not ethnic cleansing at its purest, imagining the outside beyond the wall as it should be –empty, virginal, waiting to be settled?

When purportedly peace-loving Israeli liberals present their conflict with Palestinians in neutral “symmetrical” terms, admitting that there are extremists on both sides who reject peace, etc., one should ask a simple question: What goes on in the Middle East when nothing goes on there at the direct politico-military level (i.e., when there are no tensions, attacks, negotiations)?

On Israel’s end, what goes on is the incessant slow work of taking the land from the Palestinians in the West Bank: the gradual strangling of the Palestinian economy, the parcelling of their land, the building of new settlements, the pressure on farmers to make them abandon their land–all supported by a Kafkaesque network of legal regulations.

In Palestine Inside Out: An Everyday Occupation, Saree Makdis describes how, while the Israeli occupation of the West Bank is ultimately enforced by the armed forces, it is an “occupation by bureaucracy”: Its primary forms are application forms, title deeds, residency papers and other permits. It is with this micro-management of daily life that Israel secures its slow but steadfast expansion. One has to ask for a permit in order to live with one’s family, to farm one’s land, to dig a well, to go to work, to school, to a hospital.

Though it has been largely ignored by the media, Israel is clearly engaged in a slow, invisible process–a kind of underground digging of the mole–gradually undermining the basis of Palestinian livelihood so that, one day, the world will awaken and realize that there is no more Palestinian West Bank, that the land is Palestinian-free, and that all we can do is accept it.

The story has been going on since 1949: While Israel accepts the peace conditions proposed by the international community, it anticipates that the peace plan will fail. While condemning the openly violent excesses of “illegal” settlements, the State of Israel promotes new “legal” West Bank settlements. A look at the changing map of East Jerusalem, where the Palestinians have been gradually encircled and their space sliced, tells it all. The map of the Palestinian West Bank already looks like a fragmented archipelago.

The condemnation of unsanctioned anti-Palestinian violence obfuscates the true problem of state violence; the condemnation of illegal settlements obfuscates the illegality of the “legal” ones. Therein resides the two-facedness of the much-praised non-biased “honesty” of the Israeli Supreme Court: By way of occasionally passing a judgment in favor of the dispossessed Palestinians, proclaiming their eviction illegal, it guarantees the legality of the remaining majority of cases.

And, to avoid any kind of misunderstanding, taking all this into account in no way implies an “understanding” for inexcusable terrorist acts. On the contrary, it provides the only ground from which one can condemn the terrorist attacks without hypocrisy.