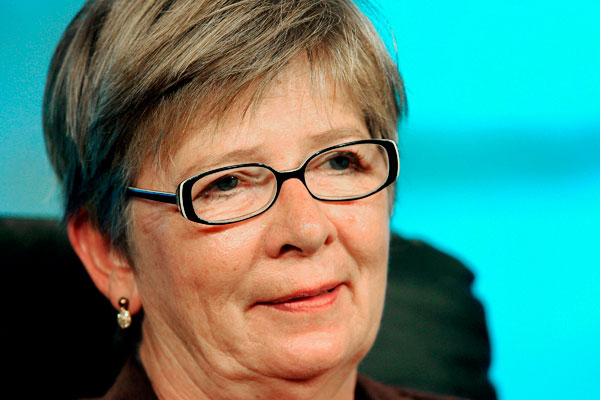 The Dark Side of the Bright Side

In her new book, Barbara Ehrenreich traces the origins of contemporary optimism.

If you want to have a compliant populace, what could be better than to say that everyone has to think positively and accept that anything that goes wrong in their lives is their own fault?

In her new book Bright-Sided: How the Relentless Promotion of Positive Thinking Has Undermined America (Metropolitan/Holt, October 2009), Barbara Ehrenreich traces the origins of contemporary optimism from nineteenth-century healers to twentieth-century pushers of consumerism. She explores how that culture of optimism prevents us from holding to account both corporate heads and elected officials.

Manufactured optimism has become a method to make the poor feel guilty for their poverty, the ill for their lack of health and the victims of corporate layoffs for their inability to find worthwhile jobs. Megachurches preach the “gospel of prosperity,” exhorting poor people to visualize financial success. Corporations have abandoned rational decision-making in favor of charismatic leadership.

This mania for looking on the bright side has given us the present financial collapse; optimistic business leaders–assisted by rosy-eyed policymakers–made very bad decisions.

In These Times recently spoke with her about our penchant for foolish optimism.

Is promoting optimism a mechanism of social control to keep the system in balance?

If you want to have a compliant populace, what could be better than to say that everyone has to think positively and accept that anything that goes wrong in their lives is their own fault because they haven’t had a positive enough attitude? However, I don’t think that there is a central committee that sits there saying, “This is what we want to get people to believe.”

It took hold in the United States because in the ’80s and ’90s it became a business. You could write a book like Who Moved My Cheese?, which is a classic about accepting layoffs with a positive attitude. And then you could count on employers to buy them up and distribute them free to employees.

So this picks up more in the early ’80s and even more so in the ’90s when globalization really took off?

I was looking at the age of layoffs, which begins in the ’80s and accelerates. How do you manage a workforce when there is no job security? When there is no reward for doing a good job? When you might be laid off and it might not have anything to do with performance? As that began to happen, companies began to hire motivational speakers to come in and speak to their people.

Couldn’t this positive thinking be what corporate culture wants everyone to believe, but at the top, people are still totally rational?

That is what I was assuming when I started this research. I thought, “It’s got to be rational at the top. Someone has to keep an eye on the bottom line.” Historically, the science of management was that in a rational enterprise, we have spreadsheets, we have decision-trees and we base decisions on careful analysis.

But then all that was swept aside for a new notion of what management is about. The word they use is “leadership.” The CEO and the top people are not there so much to analyze and plan but to inspire people. They claimed to have this uncanny ability to sense opportunities. It was a shock, to find the extent to which corporate culture has been infiltrated not only by positive thinking, but by mysticism. The idea is that now things are moving so fast in this era of globalization, that there’s no time to think anymore. So you increasingly find CEOs gathering in sweat lodges or drumming circles or going on “vision quests” to get in touch with their inner-Genghis Khan or whatever they were looking for.

The same things are happening in foreign policy. We’ve abandoned a sense of realism. You had this with Bush and also with Obama, although he is more realistic. Is there a connection between optimism and the growth of empire?

In the ’80s, Reagan promoted the idea that America is special and that Americans were God’s chosen people, destined to prosper, much to the envy of everybody else in the world. Similarly, Bush thought of himself as the optimist-in-chief, as the cheerleader–which had been his job once in college. This is very similar to how CEOs are coming to think of themselves: as people whose job is to inspire others to work harder for less pay and no job security.

Would you say that Obama is our cheerleader-in-chief?

I haven’t sorted it out. He talks a lot about hope. And as a citizen I’d rather not hear about “hope,” I’d rather hear about “plans.” Yet he does strike me as a rational person, who thinks through all possibilities and alternatives.

You write about the science of positive thinking having taken root at Ivy League universities. It’s amazing to me that a course in happiness at Harvard would draw almost 900 students.

That was in 2006. And these courses have spread all over the country–courses in positive psychology where you spend time writing letters of gratitude to people in your family, letters of forgiveness (whether or not you send them doesn’t matter), getting in touch with your happy feelings, and I don’t think that’s what higher education should be about. People go to universities to learn critical thinking, and positive thinking is antithetical to critical thinking.

You have written a lot about Calvinism. Is it correct to say you have a deep problem with Calvinism?

In exploring why America became the birthplace of positive thinking, I come up with an explanation that is quite sympathetic to the early positive thinkers. Positive thinking initially represented a revolt against the dominant Calvinist stream of Protestantism in America in the late 18th and early 19th centuries. That kind of Calvinism was driving people crazy, literally. To think that you were a sinner, that your entire existence for all eternity would be one of torment in hell. It caused depression. It caused physical ailments. It was a nightmare. So you got some people in the early- and mid- 19th century that said, “Wait a minute, things aren’t so bad.” Ralph Waldo Emerson would probably be the best known example.

Couldn’t you go back farther to the Enlightenment–the ultimate optimistic philosophy? Our founding fathers were very informed by that. Is that a kind of optimism that you endorse? And ultimately what’s different between the pursuit of happiness as a manifestation of optimism and the current optimism that you’re talking about?

When the founding fathers undertook the Revolutionary War, they didn’t say, “We are going to win because we are visualizing victory.” They knew perfectly well that they could lose and be hanged as traitors. It took existential courage to say: “We are going to undertake this struggle without knowing whether we will win, but we’re just going to damn well die trying.”

So, where does this shift come from?

The shift had a lot to do with down-sizing, when corporations grabbed onto it as a means of soothing their disgruntled workforce. The alternative is realism. Let’s think about what’s actually going on: let’s get all the data we can; see what our options are; and figure out how to solve this problem. It sounds so trite and simple-minded, but that’s not how the thinking has been.

Is the progressive movement infected by bright-sidedness?

Progressives are not immune to this. I remember Mike Harrington [a founder of the Democratic Socialists of America] as a public speaker and he always, always ended on an upbeat note. No matter what was going on, he would end by saying there was a huge opening for the left. Today, I don’t know if we can do it. But we have no choice but to try.

You mean we need to have optimism, but grounded in reality?

I don’t call it optimism. I call it determination. One of the things I’ve devoted so much time to has had to do with poverty, class and inequality. Those things are not going to go away in my lifetime, but it won’t be for my lack of trying. And that’s a different kind of spirit than optimism.

Some will say your approach is rational, incremental and just not exciting. How would you respond to that?

I don’t think mine is an arid, overly intellectual approach. Consider what we’re up against on the economic and environmental front. Huge numbers of people are not getting by. There are the ecological threats to the human species. Let’s do something about it. What could be more irresponsible than to say, “If we just think it’s going to be alright, it’s going to be alright.”

Anis Shivani is writing a book called American Fiction in Decline: Publishing in an Age of Anxiety. His book Anatolia and Other Stories is being published by Black Lawrence Press in October.