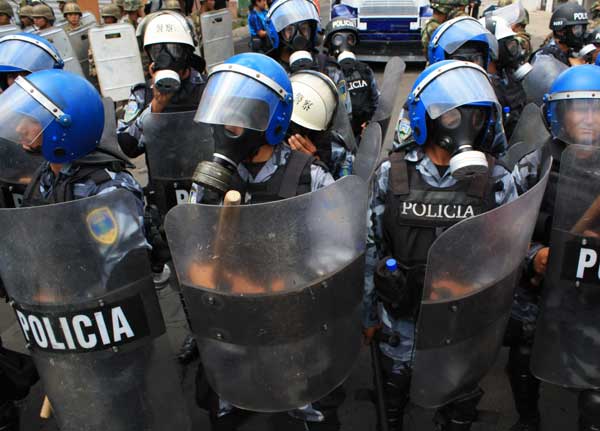 On September 23, two days after deposed President Mel Zelaya's return, Honduran riot police stand ready to disperse a peaceful protest march in Tegucigalpa, the Honduran capital. Thousands have been beaten and detained by authorities since the coup; five people have died in the last month alone. (Photo by Jeremy Kryt)

Casualties of the ‘Bloodless’ Coup

No matter what prominent U.S. apologists say, the military takeover of Honduras was—and is—violent and unjust.

Sen. DeMint insisted on the connection between America's patriotic heritage and the current peasant-killing, media-censoring regime in Honduras.

TEGUCIGALPA, HONDURAS—Many apologists for the thuggish takeover of the elected government in Honduras still claim that what happened last June 28 was a “bloodless” coup. In a Wall Street Journal editorial on October 10, U.S. Senator Jim DeMint (R-S.C.) went one step further, denying there even is a political crisis here, and referring to the ousting of President Mel Zelaya as a “supposed military ‘coup.’”

But the hundreds of peaceful demonstrators who have been brutally beaten since the putsch might disagree with adjectives like “supposed” and “bloodless.” As might the family of Jairo Sanchez, the most recent victim of government-sponsored violence, who after weeks of drifting in and out of consciousness, died in the capital on Monday, October 19.

According to the report prepared by the Committee for the Families of the Disappeared in Honduras (COFADEH), Sanchez, a 38-year-old husband and father, was shot in the face during a police raid against unarmed marchers on September 30. Three other peaceful demonstrators were critically wounded in the same attack. Apparently none of this well-documented violence made an impression on DeMint. The senator recently returned from a brief visit to Tegucigalpa, were he’d been the guest of the same political elites who worked with the military to orchestrate the putsch. “As all strong democracies do after cleansing themselves, Honduras has moved on,” DeMint opined.

During his visit, Honduras was under martial law, independent media were shuttered and police and soldiers attacked peaceful protestors just blocks from the Senator’s hotel. Yet upon returning home, DeMint reported “there is no chaos there,” that like the coup itself, this is all merely “supposed.”

Honduras was plunged into this “supposed” chaos last summer, when soldiers exiled Zelaya and presented a false letter of abdication to Congress on national television. In the same ceremony, far-right political veteran Roberto Micheletti was installed as a puppet to head the civilian government.

Since then, riot police and soldiers have shown an increasing willingness to use violence against anyone who publicly opposes the coup. Truncheons, tear gas, rubber bullets and even live rounds are frequently employed to disperse peaceful demonstrations. COFADEH estimates that since the coup, 17 people have died at the hands of authorities.

DeMint, however, made no mention of such casualties in his editorial. Nor did he reference the political scandal his Honduran junket had caused back home. In order to show his support for the coup regime, DeMint had defied direct orders from John Kerry, head of the Foreign Relations Committee. Because Kerry refused to authorize the trip, the senator flew to Honduras in a military jet sent by the Pentagon, causing crucial Foreign Relations Committee meetings to be cancelled in his absence.

But that wouldn’t be the first time the South Carolina Republican has been the source of a political log-jam. DeMint–who was ranked by the National Journal as the most conservative of all U.S. Senators in both 2007 and 2008–is also holding up crucial votes on Obama’s picks for assistant secretary of state for western hemisphere affairs (Arturo Valenzuela) and ambassador to Brazil (Thomas A. Shannon Jr.).

‘Armed against the unarmed’

During a recent interview, COFADEH Director Bertha Oliva said, “[The authorities] are killing people…and it is selective. They are targeting the leaders of the resistance, just as they did in the 80s… And they can control the media, to help them accomplish whatever they intend.”

Oliva said Zelaya had initiated some modern social reforms in Honduras, like raising the minimum wage, initiating social security and passing laws to conserve natural resources. But such bold moves threatened the power structure for the nation’s wealthiest families and the military. When the rancher-turned-president vowed to let the people vote on a referendum for broad constitutional reforms, troops seized Zelaya in his pajamas, hustling him out of the country at gunpoint.

“This is a struggle of the armed, against the unarmed,” said Oliva, when we met in her downtown office, which was recently shelled with tear gas by police. “But the Resistance will not give up its peaceful principals.”

Zelaya returned to the capital in a surprise move on September 21, but remains holed up in the Brazilian Embassy, under threat of arrest and surrounded by hundreds of troops. In addition to union leader Sanchez, others killed by authorities since Zelaya’s return include a 67-yeaar-old man, a newly-wed girl, a school teacher and a nurse. And that’s just in the last month.

“[The de facto government] ignores these casualties, because they would like to say that the Resistance does not exist,” Oliva said. “But they will not be able to say it for much longer.”