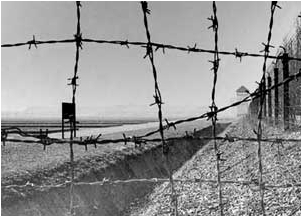 Don’t Fence Me In

BY Neve Gordon
Share TweetReddit0 EmailPrint
Have you ever thought about the baby-bottle nipple and the extensive impact this small object has had on society? Michel Foucault mentioned this simple innovation in an interview, suggesting that it not only did away with the age-old profession of wet nurses, but changed the lives of millions of mothers. In many ways, the plastic nipple helped free women from their imprisonment in the private realm, while facilitating the possibility of egalitarian parenthood.

In his Prison Notebooks, Antonio Gramsci briefly discusses the tin can, asserting that among other things it helped shape modern warfare. The novel capacity to stock up canned food in the trench storerooms—months in advance—prolonged World War I and intensified its horrific effects.

While materialist histories of objects like the tin can and the plastic nipple have yet to be written, Olivier Razac recently took it upon himself to chronicle the invention and use of barbed wire. The book is written in both a luring and lucid fashion and is illustrated with arresting American and European archival photographs.

In 1874, J.F. Glidden, an Illinois farmer, took out a patent for the barbed iron wire he had invented, and for a machine that would mass-produce it. He wanted to help new American farmers assert property ownership over their land. Sure enough, as white newcomers moved west, rapidly fencing off the prairie, the production of barbed wire shot up from 270 tons in 1875 to 135,000 tons in 1901.

The 1887 Dawes Act authorized the president to parcel out Indian land to white farmers. Simply by fencing in their newly acquired plots, white farmers managed to enclose the Indians in reservations, cutting them off from hunting grounds. Barbed wire, as Razac puts it, “chopped space into little bits and broke up the communal structure of Indian society … [making] the Indian’s geographical and social environment hostile to them, so that it became a foreign territory where the tribal way of life was unimaginable and where nomadic wandering and hunting were impossible. In short, it created the conditions for the physical and cultural disappearance of the Indian.”

During the same period, farmers employed the wire to defeat the cattle barons, in what was labeled the “barbed wire wars.” In the Hollywood film Man Without a Star, the very sight of barbed wire infuriates Kirk Douglas, who plays the archetypical cowboy hero. “What’s the matter?” asks the farmer. “I don’t like it,” Douglas answers, “or what it’s used for.” With the fencing in of the prairie, the cattle empire, founded on free grazing, ultimately collapsed, and the lone cowboy riding over the plains disappeared.

The lightness of the barbed wire and the difficulty in spotting it converted the “bramble,” as it was frequently called, into a tactical apparatus employed in the defensive structure of World War I trenches. Easily repaired or replaced, barbed wire did away with soaring thick walls, creating a network of entanglements that was a highly efficient obstacle against the attack of enemy infantry. Combatants who were caught in the wire were killed by rival fire. It is not coincidental that one of the most vivid images from World War I is the corpse of a soldier entangled in wire in the middle of no-man’s-land.

Barbed wire was also a central element in the architectural design of the Nazi concentration camp. A double fence of electrified barbed wire usually encircled the camp from the outside, while a whole set of fences divided the inside, helping to produce the totalitarian organization of space. “Everywhere,” Primo Levi wrote, “was the sinister tight iron grip. We never saw where the barbed-wire fences ended, but we felt their malign presence which separated us from the world.”

The wire also assisted in shrouding the extermination project in a veil of secrecy. At the Sobibor and Treblinka camps, the path leading to the gas chambers was camouflaged with barbed-wire braided with branches. The use of barbed wire not only facilitated the organization of space, but also this space’s swift erasure. None of the concentration camps were built to last; most were constructed in such a way that they could easily be dismantled and thus could disappear from sight and, as some hoped, from memory. “It was there,” Razac points out, “but it was not there. It was transient.”

Despite the Nazi attempt to expunge their existence, the concentration camps helped turn the image of barbed wire into a graphic symbol of captivity, political violence and death. Levi put it this way: “Liberty. The breach in the barbed wire gave us a concrete image of it.”

The book’s second part provides a theoretical analysis of how barbed wire was employed to manage space. Razac cogently argues that its use should be understood as both a sign and an action. As a sign, barbed wire “produces a kind of shock when it is used to enclose people, shaking their certitude that they are human. It confirms their fate: like beasts, they are to be worked or slaughtered.”

As an action, barbed wire excludes and includes. “Its function is always to magnify differences between the inside and the outside.”

Razac employs Foucault’s notion of “biopolitics,” the idea that in the 18th century governing began to concern itself with life—rather than death—by using a variety of techniques to manage the lives of its subjects. The author maintains that barbed wire was successful in the United States because it coincided with the biopolitical needs of the whites, while helping to destroy Indian society. Wittingly or unwittingly, Barbed Wire offers a corrective to Foucault, for it shows that modern biopolitics is often intricately tied to a thanatopolitics, the politics of extermination and death.

But Razac’s theoretical discussion is, in many ways, also disappointing. My major reservation has to do with his attempt to conflate, rather than to distinguish, the different ways in which barbed wire was employed to manage space. He argues that barbed wire was used to separate “those who will live from those who will die,” while producing a “distinction between those who are allowed to retain their humanity and those reduced to mere bodies.”

While this analysis appears accurate when thinking of the Nazi concentration camps, it does not ring true in relation to World War I. It is precisely the diverse historical roles barbed wire has played—both as sign and as action—in the modern process of separating and homogenizing society that needs to be exposed, analyzed and explained.

Explicating and trying to understand the continued widespread use of barbed wire could have added an additional dimension to this fascinating book. For example, examining the architectural similarity and differences between the camps Israel has constructed to hold Palestinians and the concentration camps Jews were held in during the Holocaust, urges one to ponder how it is that the reappearance of barbed wire in the Israeli landscape does not engender an outcry among survivors.

Does this silence put into question the symbolic power of barbed wire, or does it underscore that this power is always limited by its own context? Questions like these could have problematized Razac’s analysis, suggesting that the issues at hand are often more complex than the book implies.

Neve Gordon teaches in the Department of Politics and Government, Ben-Gurion University of the Negev, in Israel. One can read about his most recent book, Israel's Occupation, and more at www.israelsoccupation.info.