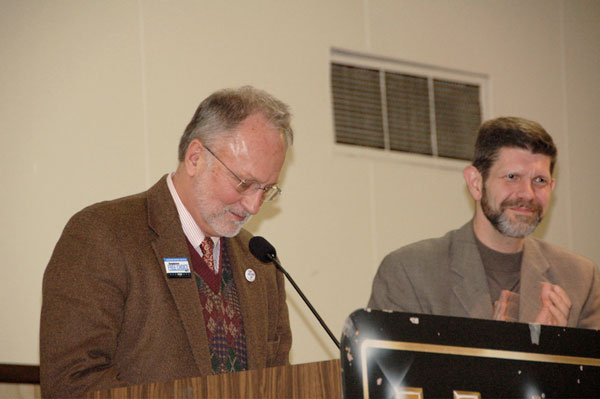 How Detroit DSA works in the Democratic Party to effect change.

In 1998, thanks partly to the work of Detroit DSA, a living-wage ordinance passed on the ballot in Detroit with 80 percent support. Since then, the group has led other successful campaigns to establish a living wage in the cities of Warren, Eastpointe and Ferndale, and in the counties of Wayne and Macomb.

Democratic socialists in southeastern Michigan can do something most of their counterparts across the nation cannot: they can boast of electoral victories. Moreover, they possess a level of influence within the Michigan Democratic Party of which many American leftists dream. And they’ve done it all without compromising their beliefs or values.

Their success has come from working with, instead of against, local Democrats.

“It starts out with relationships,” says David Green, the chair of the Detroit chapter of the Democratic Socialists of America (DSA), the organization that is a descendent of the Socialist Party of Eugene Victor Debs. He continues, “Mark Brewer, the chair of the Michigan Democratic Party, has a very good relationship with us. He’s spoken to our local several times. The chairs of the county parties, several of them are close friends as well.”

Since 1998, Detroit DSA, with about 250 members, has successfully partnered with local county chairs and other Democratic Party officials to promote and elect several progressive candidates to the Michigan state legislature. One of these candidates, State Rep. John Espinoza, was even elected in the heavily conservative “Thumb” region of the state. In 2004, with the backing of Detroit DSA, Espinoza became the first Democrat and the first Latino ever elected to represent Michigan’s 83rd District.

The secret to their success, says Green, is thinking strategically.

“We don’t pick symbolic victories,” Green says, “We pick things we can win.”

After deciding whom to support, Detroit DSA carefully chooses tactics that will have the greatest impact, all of which are based on the leftist tradition of on-the-ground, grassroots action.

Green holds initial fundraisers for progressive Democratic candidates in his own home, where he invites friends and allies to come meet the candidates and contribute to their campaigns. These fundraisers bring in several thousand dollars, which, according to Green, is more than enough to get a fledgling statehouse race off the ground, providing crucial support to underfunded progressive candidates entering politics for the first time.

To build on the initial fundraising push, a core of Detroit DSA goes door-to-door to distribute literature and answer questions about their candidates. These activists also participate in phone banking and email campaigns. As part of this effort, Green instructs his members not to identify themselves as DSA members, to avoid the knee-jerk reaction many still have toward people who self-identify as “socialists.”

Indeed, Detroit DSA has come under fire from Republicans and Democrats for being a “socialist” organization. Earlier this year, the pro-free-market, Michigan-based Mackinac Center for Public Policy asked the question, “Are socialists deciding close state house races?” In addition, in previous elections, Detroit DSA candidates have been “red-baited” by both Republican opponents and mainstream newspapers. Detroit DSA’s support became an issue in another statehouse race, in which the Republican candidate commissioned robo calls that accused her opponent, Democrat Vicki Barnett, of being a socialist.

Such red-baiting, though unsuccessful (both Barnett and Brown went on to win their elections, the former by a landslide), has prevented Detroit DSA from getting involved in higher profile races. The group offered to support progressive Democratic candidates in two congressional races in 2008: Gary Peters (9th district) and Mark Schauer (7th district), both of whom went on to victory. Green says that the candidates themselves were happy to have Detroit DSA’s involvement, but that “handlers” from the Democratic National Committee (DNC) refused the support, for fear that the candidates would be red-baited or branded as socialists.

Despite the organization’s involvement in electoral politics, Detroit DSA has not given up on its commitment to social movements.

Over the past decade, the group has successfully waged six local living-wage campaigns in southeastern Michigan, utilizing many of the same methods they use to get out the vote. In 1998, thanks partly to the work of Detroit DSA, a living-wage ordinance passed on the ballot in Detroit with 80 percent support. Since then, the group has led other successful campaigns to establish a living wage in the cities of Warren, Eastpointe and Ferndale, and in the counties of Wayne and Macomb.

In 2006, Detroit DSA also led a successful anti-sweatshop campaign at Wayne State University, which thanks to the group’s efforts, no longer sells merchandise made in sweatshops.

Green insists that the social movement activism is as important as Detroit DSA’s electoral work.

“If all we did was work on electing progressive Democrats, we’d be guilty of some of the accusations our opponents give us, that the DSA is just an appendage of the Democratic Party … that we’re political hacks. If all we do is movement work, that’s kind of naïve. The way change happens in this country is by winning elections. That’s how you gain power and make change. You have to have both.”

Looking to the future

Green is confident that the DNC’s rejection of his organization’s support will change. In the 2008 cycle, support from Detroit DSA helped to push progressive candidates over the top in close races, in traditionally Republican regions, and in races where their candidates were red-baited. They continue to lead living-wage campaigns and other social movements that mainstream Democrats can support without controversy.

The upcoming 2010 elections are particularly important for Detroit DSA. Three-quarters of Michigan’s state senators are up for re-election, and the new census numbers will mean the legislature (where Republicans in the senate have a thin majority) has to redistrict the state. With Detroit DSA’s support, Green says, the Democrats can help avoid Republican dominance and gerrymandering.

Through it all, though, he says, the democratic socialists will stick to their guns and stay committed to long-term progressive change.

“We have to continue to be progressive so people will say, you know, it’s worth working with these people. And we can handle any flack that comes from the right wing. That takes a little backbone, a little experience … and it doesn’t happen overnight.”

Seth A. Maxon is an editorial intern at In These Times who has written for The Chi Town Daily News, The Huffington Post (Chicago) and The Chicago Maroon.