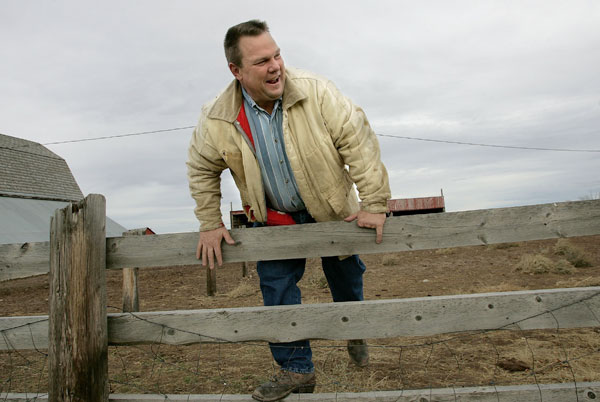 On Nov. 7, 2006, then-Democratic U.S. Senate candidate Jon Tester hops a fence as he works on his farm in Big Sandy, Montana. (Photo by Justin Sullivan/Getty Images)

Hope Is Not Change

Patience is not a virtue—and good things don’t come to those who wait.

When you look honestly at what’s going on in our government right now, it’s not clear that “change” was anything more than a cynical campaign slogan on a colorful t-shirt.

People are right to be angry. While we have certainly seen some encouraging progressive policy successes, the average person is nonetheless looking at an economy with a real unemployment rate of 17 percent–the highest since the Great Depression. And if they hear news of politicians at all, they either see them taking 15 different positions on the most simple issues, or raising boatloads of cash from the same corporate fat cats who got the country into this mess.

We must realize that politics is serious, and at this time it behooves us to change our attitude and adjust our perspective.

Parties and politicians are means to an end–not an end unto themselves. Some Democratic partisans insist that efforts to pressure President Obama and congressional Democrats are disloyal or traitorous–as if the objective in American democracy is to preserve a politician’s power.

That, of course, isn’t the goal–the goal, as Barack Obama’s fellow community organizers know, is to turn people’s “hope” into real “change.”

Some say contested Democratic primaries weaken the electoral chances of Democratic candidates in general elections. That’s untrue on many levels.

The last hotly contested Democratic U.S. Senate primary in the Mountain West occurred in 2006 in Montana. You’ll recall that the Democratic Party’s Big Money tried to force a guy named Jon Tester out of that primary race. Had Tester not run that race, Democrats would have coronated Tester’s opponent, State Auditor John Morrison–a candidate with a potentially devastating personal scandal in his closet who would have been crushed in the general election by the Republican incumbent, Sen. Conrad Burns. As Tester told the Senate Democratic Caucus when he arrived in Washington, primaries make candidates stronger.

Those who wring their hands about Democratic primary challengers–whether Big Money donors, organized interest groups, cynical political power brokers or the ever-present pundit consultants–and who have sought to stop primary challengers represent the same status quo that drove this country into a ditch. It is a status quo that sees democracy as a threat rather than a cure. And yet had we had more democracy–had we had a Congress that responded to the longtime public demand for healthcare reform, an end to the Iraq War and more serious corporate regulation–we wouldn’t be in the trouble we’re now in.

For those that urge caution, let’s be clear: patience is not a virtue–in fact, it’s the last refuge of the status quo and a rationale used by some of the most despicable forces in our past.

Those who look at the crises our states and country face and look at the legislative opportunity Democrats hold and nonetheless argue for “patience” are making the very same “don’t go too fast” argument made against every step forward we’ve ever taken. They are the Father Coughlins arguing against the New Deal, the Goldwaterites opposing Medicare, the tea party protestors angrily snarling at minorities and the uninsured.

They’ll remember the results. And to get those results, we must know that this is not a game and patience is not a virtue.

This article was adapted from the keynote speech to the Democratic Party of Denver’s annual Edward M. Kennedy Dinner on Nov. 7, 2009.