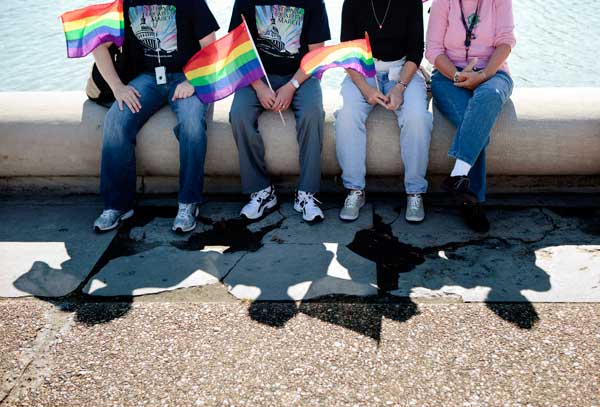 People rest during a protest October 11, 2009 in Washington, DC. Activists gathered in DC to push President Barack Obama's administration and the U.S. Congress to live up to promises to the lesbian, gay, bisexual and transgender community to advance civil rights. (Photo by Brendan Smialowski/Getty Images)

No Change for Obama

LGBT activists launch a boycott of Barack Obama and the Democratic Party.

One year ago, many members of the LGBT community, their families and friends were overjoyed at Barack Obama’s election. Today members of that same community find their fervor has faded.

On November 9, AMERICAblog editors John Aravosis and Joe Sudbay launched a boycott of Obama and the Democratic Party. Those who sign their online petition take a pledge to withhold all donations to the Democratic National Committee and Organizing for America until the Employment Non-Discrimination Act is passed, and both Don’t Ask, Don’t Tell and the Defense of Marriage Act (DOMA) are repealed–all actions that Obama promised to fulfill as president. During the 2008 primaries, AMERICAblog was an early supporter of Obama, raising nearly $50,000 for him as a candidate.

AMERICAblog outlines concrete examples of the president not being the “fierce advocate” for the civil rights of gay and lesbian Americans that he had promised to be. While an optimistic speech to the Human Rights Campaign and the signing into law of the Hate Crime Bill on October 28, were steps forward, Obama failed to oppose anti-gay legislation in both Maine and Washington state.

issue,” Aravosis told In These Times. “We kept hearing from more and more readers, and friends, both gay and straight, who asked why any of us should be giving another dime to Democrats, with the way they’ve been treating us.”

While some critics may preach the importance of remaining patient, Aravosis cites the DOMA scandal that occurred in June–when both the White House and the Department of Justice upheld the definition of marriage as a legal union between a man and a woman–to highlight the importance of taking action. “If we pressure the president to keep his promises, we lose nothing. If we wait to see if he really is going to keep his promises, and he doesn’t, it will be too late to do a damn thing about it,” Aravosis says.

Aravosis says that when DNC Treasurer Andy Tobias posted comments on the blog expressing his discontent with the campaign, it was “a surefire sign that we got the DNC’s attention.”

In its statement on the issue, the Human Rights Campaign (HRC) says, “Individual donors should always make their own careful assessments of how to spend limited political contributions. We all need to focus on the legislative priorities identified by AMERICAblog and with whatever tactic individuals decide to employ, the ultimate objective needs to be securing the votes we need to move our legislative agenda forward.”

Aravosis thinks HRC did a good job of avoiding criticism of the effort, and even somewhat reinforcing the campaign’s message. “At some point, HRC needs to realize that they’re in the driver’s seat,” Aravosis says. “The administration needs HRC far more than HRC needs the administration.”

To date, almost 6,000 people have signed the petition.

“Damn right we think it’s the most effective political strategy we could have employed. Carrots alone get you nowhere in Washington. Sometimes you need a good stick too.”

Find out more about “Take the Pledge, Don’t Ask, Don’t Give

Gemma Baltazar is a fall 2009 In These Times editorial intern and a student at Northwestern University's Medill School of Journalism.