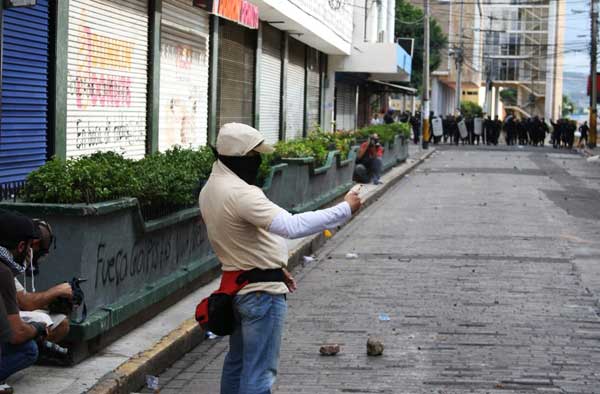 A Honduran youth prepares to throw a home-made bomb at police officers, shortly after authorities attacked a rally in Tegucigalpa, the Honduran capital. (All photos by Jeremy Kryt)

Photos of Honduras in crisis, all taken since President Mel Zelaya was ousted from power by a military coup last June.

In the weeks since the election, the human rights situation has deteriorated. Shooting and killings are becoming increasingly common

TEGUCIGALPA, HONDURAS–It’s the worst political and humanitarian crisis to hit Central America since the terrible wars of the 1980s, and it doesn’t seem likely to go away any time soon.

The coup that deposed President Mel Zelaya last June ignited a firestorm of nonviolent but determined resistance, but the business-military junta–under the leadership of de facto president Roberto Micheletti–reacted to the peaceful marches and demonstrations by cracking down hard on protesters. More than 3,000 people have been detained, and hundreds more have been beaten, with many requiring hospitalization for their wounds. At least 28 members of the resistance have been killed by soldiers, police, or political assassins during the last five months.

Zelaya’s term will officially end on January 27. His successor, Porfirio Lobo, is widely seen as having cooperated with the coup. The turnout for an election in late November was the lowest in the Honduras’ history, and the coup government was caught in the act of fixing the numbers. Meanwhile, Zelaya remains trapped in the Brazilian embassy, allowed to leave the country safely only if he first renounces the presidency.

In the weeks since the election, the human rights situation has deteriorated. Shooting and killings are becoming increasingly common in the streets, as the coup government’s harsh policies have led to a troubling rise in poverty and violent crime. And last month, the regime itself was accused of torturing and murdering two resistance activists.

Several farmers unions have risen up in recent days, occupying their formerly legally-titled land because the de facto government has begun canceling agricultural micro-loans and land-ownership programs that Zelaya had enacted. The Honduran judiciary ruled against the farmers last week, and soldiers and police have been sent to disperse the farmers and their families.