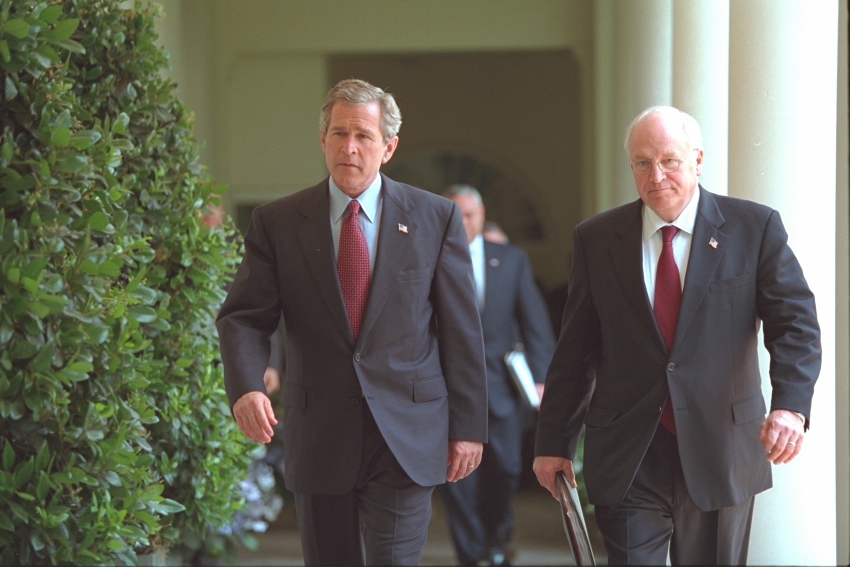 However much Iraqis loathe their regime, they will soon loathe the American occupation that will follow its demise.

Stop the War in Iraq Before It Begins

The real reasons and the likely consequences of the next war

The Bush administration has offered three main reasons for war with Iraq. First, Iraq has developed and may possess weapons of mass destruction, has a history of aggression against its neighbors, and has sponsored international terrorism. The administration argues that since Iraq might share such weapons with terrorists, only war can eliminate this threat to the United States.

Second, the Iraqi regime is a brutal dictatorship that has used lethal weapons against its own citizens. The administration argues that only war can ensure its removal and the installation of a democratic successor, opening up, they say, a whole new era of democracy throughout the Middle East.

Third, Iraq has repeatedly violated U.N. Security Council resolutions. The administration says that since Iraq is now in violation of U.N. Security Council Resolution 1441, recently passed, the United States would simply be enforcing international law by going to war to remove its regime.

Rarely have false conclusions flowed so smoothly from sound premises. Iraq did use poison gas against Iran and its own citizens, had nuclear and biological weapons programs, and aggressed against Iran and Kuwait. Most credible observers believe, however, that Iraq has no prospect of developing nuclear weapons or delivery systems in the foreseeable future.

Moreover, this same Iraqi regime possessing the very same weapons systems was strongly supported by the United States in its war on Iran. It was supplied by the United States and its allies with the wherewithal for its most lethal non-conventional weapons. None other than Donald Rumsfeld himself was in Baghdad as President Reagan’s envoy while Iraq was using poison gas against both Iranian troops and its own Kurdish citizens—without him or a succession of U.S. envoys emitting so much as a peep.

International terrorism has been sponsored by Iraq. It was directed primarily against other Arab countries, against Iran, against the PLO and against Israel. There has been no proven case where it was used against the United States, or where Iraq has offered non-conventional weapons to terrorists, nor is it likely to do so. Iraq no longer scares its neighbors, as is proven by the fact that virtually none of them supports this war. In fact, Iraq today poses no credible threat to the United States, its vital interests or its allies.

The Iraqi regime is a ruthless dictatorship. In spite of its atrocious human rights record before its invasion of Kuwait, however, this regime was the darling of the Carter, Reagan and first Bush administrations. It is highly questionable whether the occupation of a complex, divided country like Iraq and the installation of a new regime will lead to a rapid flowering of democracy. And it requires a breathtaking combination of naiveté and wishful thinking to believe the occupation of Iraq will lead to the peaceful spread of democracy in the Middle East.

Iraq, I would remind you, is not the only serial violator of Security Council resolutions with nuclear weapons. But no one proposes using force against either Israel or India or, for that matter, North Korea—all three of which have workable nuclear weapons and lethal delivery systems, unlike Iraq. Moreover, the Security Council alone can authorize the use of force and it, and not any member state, even the United States, is the sole judge of whether to do so.

Even if it does make such a decision regarding Iraqi arms violations, it is inconceivable that the Security Council will sanction the overthrow by the U.S. military of a member state’s government, even one so atrocious as that of Iraq. None of these are matters for the United States to deal with alone. No one elected us world policeman, and no one elected us the sole judge of international law.

Let me quickly examine the real reasons and the likely consequences of this war. First, it will be fought because of an aggressive, ideological vision of America’s place in the world, propagated by the neoconservatives who dominate the commanding heights of the American bureaucracy. Their vision proposes unfettered world hegemony for the United States, to be consecrated by the demonstration of U.S. power crushing a weak Iraq.

Second, this war will be fought because of an obsession with control of the strategic resources (read: oil) and geography offered by the Middle East, with the view of neutralizing potential challengers to American hegemony in the 21st century (meaning primarily China). Fantastic as it sounds, after an unconditional U.S. victory in the Cold War, and given that our defense budget is bigger than those of the next five great powers put together, these ideas are fervently believed by those who surround our president.

Third, this war will be fought because these neoconservatives desire to make the Middle East safe not for democracy, but for Israeli hegemony. They are convinced that the Middle East is irremediably hostile to both the United States and Israel; and they firmly hold the racist view that Middle Easterners understand only force. For these American Likudniks and their Israeli counterparts, sad to say, the tragedy of September 11 was a godsend: It enabled them to draft the United States to help fight Israel’s enemies.

What are the potential consequences of a war in Iraq likely to be fought without U.N. sanction and without significant support from American allies? Irrespective of its cost or length, this war will mark not the end, but the beginning, of our problems in this region. Because, however much Iraqis loathe their regime, they will soon loathe the American occupation that will follow its demise.

No expert on Iraq believes the United States can simply invade and then rapidly withdraw without a bloodbath and a regional power vacuum ensuing. None believes that the creation of a democracy in Iraq will be a swift or simple matter; some believe it is not possible as a consequence of an American military occupation. And no one with any sense could believe a one-person-one-vote democracy in a country with a 60 percent Shi’ite majority is the Bush administration’s objective. Think about that.

So we will not have democracy in Iraq. We will have a long American military occupation that will eventually provoke resistance. It took two years before the Iraqis revolted against British forces in 1920. They then almost chased them out until unrestricted air attacks restored British rule. Via a lengthy and bloody occupation of Iraq, via the establishment of U.S. bases there, via the direct control of Iraqi oil, we will be creating legions of new enemies throughout the Middle East.

For those who believe that “all of them” in the Middle East hate us anyway, this will be fine. It will provide the pretext for them to execute the next phase of their crackpot schemes, which involve marching on to Tehran and Damascus. It will provide them with new enemies to justify fattening a defense budget that can never be big enough for them.

But for those of us for whom empire is not part of our vision of the destiny of the United States and who do not want our children, our grandchildren, our brothers and our sisters fighting in places none of us can even find on a map, perhaps it is time to say, enough is enough.

It is time to ask hard questions that never seem to be asked in Washington. Such as, if for decades during the Cold War, when facing a nuclear-armed superpower with clients throughout the Middle East, the United States could protect its vital interests with an over-the-horizon military presence, now, with the Cold War over, why must there may be American bases in so many countries there? Or, why do we need an ever bigger defense budget to support conventional and nuclear forces designed to deal with enemies that have already disappeared, when the most dangerous enemies we’ve faced in the last decade were armed with box cutters?

Against those who attacked the United States on September 11, the Pentagon’s hundreds of billions are not only useless, they are counterproductive, since they provide the circular, self-justifying logic for bases and for the heavy-handed control of far-off places that engender hatred against us. But those billions can produce–and, if there is a war, will produce–an overwhelming victory over a fifth- or 15th-rate power like Iraq. So our leaders propose a war on Iraq, a war that will only create enemies among people who could be our friends, but for the actions we are about to take against them. I propose that we withhold our consent and stop this unjustified and unjustifiable war before it begins.

Rashid Khalidi is the Edward Said Professor of Arab Studies at Columbia University and author, most recently, of Resurrecting Empire: Western Footprints and America’s Perilous Path in the Middle East.