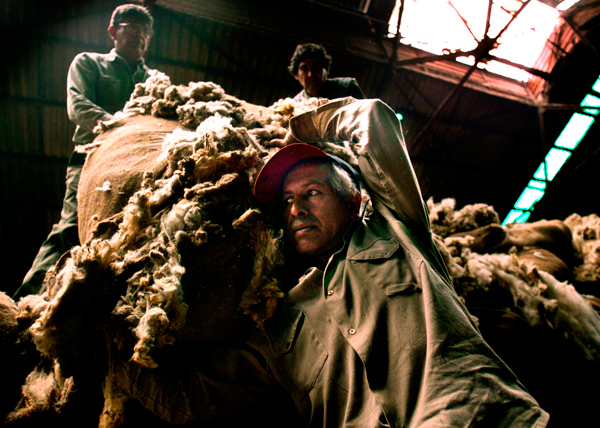 Workers move sacks of wool to be processed at the Cooperativa Lavalan Ltd in the Avellaneda district of Buenos Aires, in 2002. In Argentina, workers are taking matters into their own hands, rescuing bankrupt factories and their own livelihoods. (Photo by ALI BURAFI/AFP/Getty Images)

‘To Resist Is to Survive’

Divisions within the movement, apathy from the government, and a lack of capital threaten the future of workers' factories.

BUENOS AIRES, ARGENTINA–“Work is work, politics belongs somewhere else,” says Placido Peñarrieta, a lithe and graying worker at Arte Grafica Chilavert (Graphic Art Chilavert), an Argentine print shop. But what is occurring in this warehouse in Buenos Aires’ Nueva Pompeya neighborhood–thought to be where tango originated–and in many other workplaces across the country is most definitely a political act. Nearly 10 years after the rapid fall of Argentina’s economy, the country’s worker-occupied cooperatives persevere, a radical experiment in restructuring the capitalist status quo.

What started as desperate solutions to a severe economic crisis have evolved into established business models. “What the recuperated factories in Argentina are showing is a model of economic justice,” says Eduardo Murúa, founder of the National Movement of Recuperated Businesses (MNER), an organization tying together workers at the various Argentine worker-run businesses. The nearly 200 businesses, which employ close to 10,000 people, are worker-managed and worker-operated, with many paying equal wages regardless of position or experience.

But divisions within the movement, apathy from the center-left Kirchner/Fernandez government, and a lack of capital threaten the future of both the workers’ factories and their movement.

The formation of many of these worker-run cooperatives resulted from the lesson in economic collapse that Argentina received between 1999-2002. “The economy contracted by almost 30 percent, and unemployment exploded,” says Professor Sebastian Saiegh, of the Center for Iberian and Latin American Studies (CILAS) at the University of California San Diego (UCSD).

Argentine President Carlos Menem implemented a slew of neoliberal reforms between 1989 and 1999, including opening up the country’s financial markets and privatizing numerous national industries. This earned the country praise from the International Monetary Fund.

Despite Menem’s best effort and his privatization schemes, in the wake of the 1997 East Asian and 1998 Brazilian financial crises, investors began fearing that debt-laden Argentina might default on its loans. Capital flight wreaked havoc on the country. In 2001, the nation faced runs on the bank, eviscerated savings accounts and massive unemployment.

The severity of the economic meltdown caused workers to innovate new modes of job creation. Many Argentinean workers dealt with their sudden unemployment proactively. In some workplaces, employees broke into their workplaces and locked bosses out so they could continue working. “Our motto was resist, produce, and occupy,” says Claudia Acuña, a journalist who covered the occupations.

A whole gamut of institutions and businesses were taken over and run by workers, including a hospital in Lavallol, the ice-cream flavoring Vieytes factory in Buenos Aires, and the Forja San Martin steel and auto parts plant outside of that city. What tied the whole movement together wasn’t the industry or the service but the common desire of the employees to prevent layoffs or closures by occupying and operating these workplaces.

Workers continue to manufacture and distribute their goods for the domestic market, says Murúa. While products have been shipped to bordering countries, the majority of products manufactured in the recuperated factories are targeted for consumption within Argentina.

In the midst of the economic crisis, workers from various factories networked with each other in order to seize and hold their workplaces. Formed in 2001, MNER is an organization comprising employees from numerous worker-occupied factories. “Our movement is about showing solidarity with fellow workers and giving them whatever support they need to occupy, resist and produce,” Murúa says.

A stout union activist, Murua became involved in the movement by supporting the workers of IMPA–an aluminum foil plant in Buenos Aires. In 1999, Murúa was brought in by the Metalworkers Union, when the plant’s employees had a dispute with the management. “We started to think about how we achieved the goals of the struggle in the past, and realized we couldn’t achieve better work conditions or salaries when Argentina was experiencing [very high] unemployment,” he told In These Times. (The country’s highest unemployment rate was 25 percent, in 2003.) “Through this framework we decided to be involved with the occupation of [IMPA] so that it could produce.”

For many factories, community support was essential to their survival. IMPA and Chilevert, both plants located within quiet Buenos Aires neighborhoods, received help from neighbors during their occupations. Assistance often came in the form of barricades or demonstrations. Many community members became involved due to their disgust with Argentina’s central institutions, such as the government and banks, who they blamed for the collapse.

Even today, this movement provides the manpower needed to repel the police when they attempt to evict the workers from the factories. After seizing the businesses, the movement provides whatever technical support required by employees to run it themselves.

“The first type of help we provide is the moral support,” says Luis Caro, president of the National Movement of Recuperated Factories (MNFR)–a rival federation and offshoot of MNER. “After that, we give them technical help, explaining what options they have and how they can move forward, so they can produce and operate.”

Adam Case, a former In These Times editorial intern, is a San Diego-based I.W.W. organizer and freelance writer. He has traveled extensively throughout Latin America, encountering guerrillas, intellectuals and change-makers. But most of the time he tries to indulge his passions, which include surfing, social justice and a good Philly Cheesesteak.