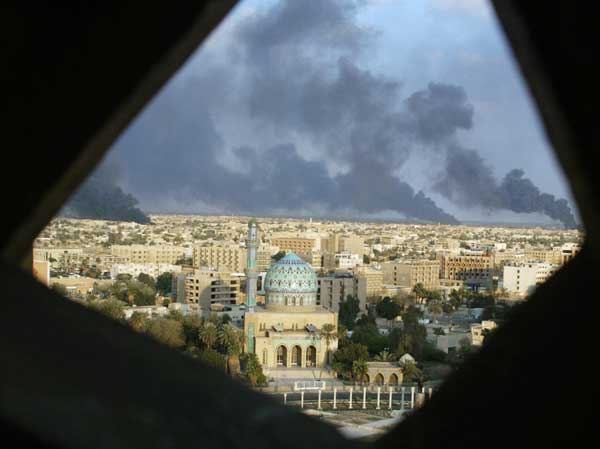 Back Then in Baghdad … And Now?

On the seventh anniversary of the U.S. invasion of Iraq, a remembrance of what once was.

Back then there was one criminal, one persecutor, and everyone knew who. Everyone knew he was a monster, an undisguised devil, the evil spirit capable of crippling a strong and hearty people.

Back then. Way before all this bloodshed and carnage and butchery. When there were no sirens and riots and bombs, and the lipsticked, powdered, mascaraed and coiffed women sauntered down pavements on bright red stilettos and the men came up to me, grabbed my elbow and demanded to escort me across busy intersections, I wandered the avenues and alleys and cul de sacs and shopped in the souk and ate late cream- and sugar-heavy breakfasts with the civil servants in brightly lit, music-booming cafes and sat by the Tigris and watched young Iraqis flying kites and old Iraqis reading newspapers and discussing the local and national politics and listened to the “English TV News for Foreigners.”

Back then. Way before rape and kidnapping and sniping were commonplace. Back in 1977 and the world was full of disco and Close Encounters of the Third Kind and Amnesty International won the Nobel Peace Prize and Jimmy Carter pardoned draft evaders and Anwar Sadat visited Jerusalem. It was different. “Alluh Akbar” resounded through the city. This magical, mystical, musical plea called the faithful to prayer. It reminded the unfaithful that there was an order, a schedule that must be obeyed.

Baghdad was an ancient and modern Arabic metropolis of electricity, and vibrancy, and vitality, and questioning, and answering, and dinner parties, and bright-red nail polish, and Armani-clad gentlemen, and Marks and Spencers-clad tumbling tots, and young, bright-eyed, short-skirted Kurdish women working in government offices, and well-educated, high-powered Iraqi women holding the reins in sprawling schools and sky-scraping offices, and gallant mustached old men shrouded in elegant gowns and headscarves helping even older men in more elegant attire across the bustling roundabouts and past hordes of honking, newly imported cars hurtling over newly constructed highways past heavily laden donkey carts and state-of-the-art water treatment plants and modern hospitals and schools and electrical substations and stadiums with roaring, cheering crowds. And above all these signs of “we are no longer a third-world country,” fleets of planes arriving and departing on time from every corner of the earth.

Back then I awoke earlier than sunrise, had my sweet Turkish coffee and crumbly biscuits and sat in the garden watching the stray, flea-infested, mange-riddled cats scurry through rows of aloe vera and agave and up and over the Bougainvillea-clad walls.

In the first light of the sun I transplanted the prickly pears and heavy-scented red and yellow rose bushes and hoped the limes, lemons, pomegranates and dates would ripen. As the early morning rush hour began, I walked along the shores of the ancient river and counted the boats sailing up and down while listening to the soulful songs of the desert Bedouins, the honk of traffic in the background.

I shopped in the ancient, crowded Rasheed Street souk. The dark, narrow alleyways with their cubby-holed stalls overflowing with old brass and copper pots and pans and water pitchers lying next to imported plastic buckets and tin ware from China and India and Pakistan. Piles upon piles of 24-karat gold bangles and necklaces being weighed and wrapped and purchased. Grandmothers and mothers and daughters bargaining for yards of imported eastern silks and brocades and western polyesters and Syrian damasks. The all-invasive, vomit-inducing smell of raw and cooked mutton, mingling with the heavenly scents of jasmine and patchouli oil from the east and the highly prized, light-colored clumps of frankincense from Oman.

I walked through the date palm-lined avenues at the university and passed couples smoking and chatting and reading and holding hands. They had their futures before them. They talked of archaeology, architecture and nuclear physics and owning a 280.4 Mercedes and shopping in Kuwait. The professors–men and women–sat on the manicured lawns and discussed their latest publications and the political intrigues that surrounded their internal and external lives.

During the heat of the day, while the 120-degree furnace of sun glare and dust particles sunk into the concrete pavements and burned into the water-deprived gardens, I napped in my safe cocoon cooled by the dribble and drips and hums of the outdated air conditioners.

During the late-evening breezes I walked the streets. Music came from every door and window. The shops buzzing with electric lights and shoppers and merchants and the bustling cafes with their clatter of dishes and cutlery and pungent aromas signaled the nightfall exchange of crisp, beautifully printed dinar notes, green and red and purple. An eruption of bright sights and loud sounds and intense aromas poured out on the neon-littered streets. Homes alight with laughing, multi-generational families seated around large damask-covered tables, feasting on fried eggplant doused in tahini and fresh salads topped with toasted pita bread and bright-pink, pickled turnips. And me, a lone woman hailing taxis and riding buses and going from place to place with no fears, no worries. It was safe. I was safe.

The shadow of Saddam

Yes, there were whispers and rumors that “things” were happening. People were disappearing. Bribes were being paid. Money was being rerouted into foreign bank accounts. Blood was being spilled. A picture of Saddam Hussein hung in every shop, café, hotel and government room. He listened. He had people listen for him. And those people had people listening to them.

Back then there was one criminal, one persecutor, and everyone knew who. Everyone knew he was a monster, an undisguised devil, the evil spirit capable of crippling a strong and hearty people. But the man driving the bus, the woman cleaning the floor, the shopkeepers and secretaries and clerks and travel agents–the everyday-go-to-work-and-come-home people, carried on eating their freshly grilled, succulent samak masgouf fish spiced with salt, pepper and tamarind by the lights of the bonfires dotted along the banks of the ancient Tigris river. The school children toted their homework-laden knapsacks back and forth, day after day, and the librarians stamped books in and stamped books out, and young lovers held hands in the dark movie halls, and the wives and mothers and spinsters–some of them unveiled, some of them kitted out in brightly colored hot pants and tight sleeveless tops hidden by black-sheeted abayas–exchanged gossip on the street corners and over back walls. And the men–those who were not in the army–walked the streets in their three-piece suits, sporting watch chains and carrying their black shiny briefcases specially imported from Kuwait.

That was then, and this is now.

Now, so far away, as I sit on another continent listening to the soft London rain, with my hair tied up in a hand-woven, multi-colored Bedouin sash and my feet planted firmly on an old Kurdish carpet and my hand clutching a half-pint, hand-hammered Baghdadi copper coffee pot, searching back into the shadows, looking behind me to the time when things were functioning, I realize that life for all the Alis and Leilas and Omars and Fatimas and Akrams I once knew is worse.

And now, so far away, I listen to the many displaced peoples–hoping, praying, wondering if someday they can return to their homes and their friends and their families and their Baghdadi womb that made them who they are. I fear that these dreams of theirs–fired by apple-scented tobacco and strong black coffee, spiraling through the streets close to Marble Arch–will snap and break and die like the thousands upon thousands of people hung over so many centuries from the nearby Tyburn Gallows so long ago.

And now, so far away, I listen to the outside rulers standing at podiums surrounded by oceans of so-called tranquility, speaking in terms of so-called civility, as if, for the past seven years, they had not unleashed a barrage of naked violence upon that once-fertile, once-thriving, once-booming cradle of civilization.

A version of this article was published in Nimrod International Journal.

Idious Buguise is an anthropologist who has done research in Africa, Asia and the Middle East.