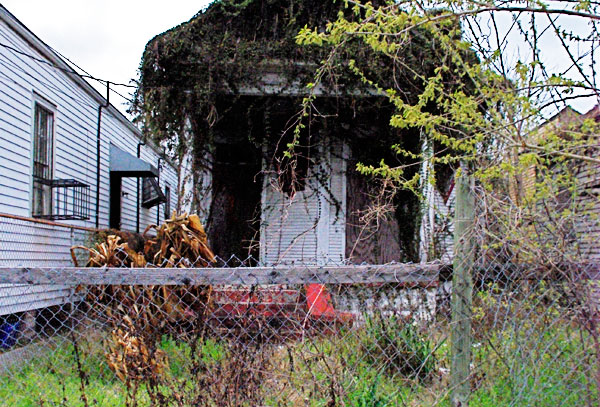 Notes From the Frontier of New Orleans

The Sixth Ward, as I see it, is indeed quite similar to a far-flung frontier town. The community is a semi-stateless entity, which for the most part administers itself.

Despite being barely more than a mile from City Hall, the Sixth Ward neighborhood of New Orleans seems like it’s as far from the levers of power as a place could be. The edges of the cracked and potholed streets in my part of this neighborhood sprawl haphazardly into tiny front yards, as there are no sidewalks. With minimal traffic, residents normally walk down the middle of the street. On many blocks, fewer than half of the houses are actually occupied–vines have engulfed many of the abandoned structures, and squatters and drug users find shelter within their confines.

One afternoon, a man wearing a backpack bicycled past my house while calling out, “Crack cocaine, crack cocaine.” It was as if he were selling popcorn at a baseball game.

And, as in a lawless frontier town, guns often blaze. One night as I got out of the shower, I heard machine gun fire right outside my house. The reports made an eerie whirring sound as they bounced between houses. A few minutes later, I went outside to find that someone had tried to kill Andre (all names have been changed), the son of Mr. Parker, who lives across the street. He had ducked behind his car, which was barraged with bullets, and run around the corner, evading his attackers. I saw him the next morning, and I asked him how he was making out. “Happy to be alive, baby,” he said. “God blessed me with one more day.”

I’ve lived here for a year and a half, and people no longer greet me with “Hey, white boy.” I became Woods, or simply Neighbor. I do not, however, pretend to think that my color is no longer seen by my neighbors. Nor is it forgotten by those around me that I, as a teacher in the public schools, am better off financially than they are.

I know it will take much longer for these racial and economic boundaries to be broken. Yet over the past year and a half, I have seen them weaken.

I have learned that there is more skepticism toward those in power here in the Sixth Ward than I’ve seen anywhere else I’ve lived, including Mississippi and Brooklyn. Shortly after I moved n, a man was shot a block down and an ambulance didn’t arrive for close to an hour. As I stood in a crowd of onlookers, a woman a few feet away from me said, “I bet if he was white an ambulance would’ve already taken him off.” I’m not sure that she was wrong. Yet this woman’s outlook is of the same line of thinking that led many to believe that the levees were bombed during Katrina to drown out black communities. This fundamental distrust has accumulated over centuries of powerlessness.

One time when I think that the aforementioned boundaries were breached was my first Halloween in the Sixth Ward. A friend and I sat on my stoop with multiple bags of candy, waiting for trick-or-treaters to pass by as the sun slowly waned. Shortly after we sat down, Sandra, my next-door neighbor, brought out a bottle of whiskey, and we all drank. Soon, passers-by joined us. I had already talked on numerous occasions with nearly all of my neighbors, but as the whiskey passed in a circle from hand to hand, I learned much more about those with whom I lived.

I found out that B. had always wanted to see the world but too frequently ended up only seeing the walls of Orleans Parish Prison. I also found out that three days after Katrina, Mr. Parker, who was the only person for blocks around who stayed through the storm, decided to get into his dump truck–he made his living by renting it out–and drive around looking for people. Any people. He ended up actually finding people of his own–cousins, nieces and nephews–and ferrying them to safer points in the city.

Brenda also stopped by. Brenda, in her fifties and mentally unstable, spends much of her time walking the streets alternately singing spirituals, shouting out random obscenities at people, or both. On one of my first days in the neighborhood, she asked to borrow two dollars, and I gave her the money. She told me things were hard just then, and that the tenth anniversary of her son’s death due to AIDS was coming up. One morning, four or five months later, Brenda walked up to me and put two dollars in my hand. “I hit the lottery yesterday, won two hundred dollars,” she said. “Here’s those two dollars I borrowed.”

“What you gonna do with the rest?” I asked her.

“I got real drunk on some daiquiris last night. Now I gotta pay back a whole bunch of other people with what I got left.”

As the sun set, the trick-or-treaters started to arrive. In the next few hours my friend and I were visited by a steady stream of princesses and Hannah Montanas, as well as some diminutive serial killers.

The palpable power of love

People ask me why I live in the Sixth Ward. In response, I tell them about that Halloween on my stoop. I tell them about the mornings I’m not feeling motivated, when I open my door to go grudgingly to work and find Donald, Mr. Parker’s mentally disabled, middle-aged stepson, sitting on his porch waving at me with a huge smile on his face that makes me instantly feel better. I tell them about all of the evenings when I’ve seen huge pots of gumbo or red beans and rice move from one house to another, depending on who’s cooking. Or I tell them about how I often see Brenda around dawn, gathering together her few scraps of sanity for just long enough to help her elderly mother get on the handicap bus as she does every morning.

This community, as I see it, is indeed quite similar to a far-flung frontier town. It’s a semi-stateless entity, which for the most part administers itself; I believe that more than anything else, the force that keeps this community from foundering is love. This is why I live here: the palpability of this force, despite circumstances that would seem bent on destroying it.

The other evening, Brenda was walking down the middle of the street in one of her worse moments. She screamed out to everyone, or no one, “Look at me! Look at me, motherfuckers! That’s right, say what you want, fuck all of y’all!” When she does this, no one laughs and no one appears to get angry. They just go on doing what they’re doing and let her get it out, let her scream. But that’s hard for me to do. I have to wonder about what I see: What’s wrong? What happened to her? Undoubtedly, everyone here knows but me. Even if they don’t know the exact events in their most intimate details that led to Brenda’s current state, they simply know. They know what she’s screaming about. And I imagine that’s where much of the love comes from.

At some point I will leave the Sixth Ward. The fact remains that I don’t know, truly know, why Brenda screams, and I doubt I ever will. This lack of knowing creates a great divide between the people of this community and me.

Also, I have the option to leave at any time, to go to another neighborhood where there are no Brendas, and no dead bodies, constantly demanding that I look at them. This option to move where I please is yet another thing that divides me from my neighbors, and I feel sad when I think of the terminal nature of these divisions.

For what it’s worth, however, I have looked at Brenda just as she demanded and have tried to understand. All of us should try to do the same. We must look at her closely, and we must listen. We can’t just immediately turn away, no matter what ugliness we might see within ourselves staring back at us. Brenda’s screams, despite their physical proximity to the center of the city, occur just beyond the outermost reaches of that center’s consciousness. Her screams need to be brought into the center, for that center (and its deafness) is implicated. And so many of us, as part of that center whether we realize it or not, are therefore implicated as well.

Woodlief Thomas is a school teacher and writer in New Orleans. He can be reached at woodliefthomas@hotmail.com.