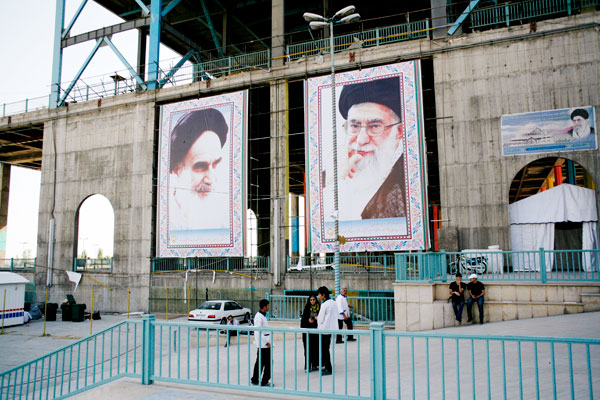 Outside a new mosque compound being built in Tehran, posters hang side by side with the images of Iran's two spiritual leaders since the 1979 revolution: Ayatollah Khomeini (left) and his successor Ayatollah Khamenei. (Photo by Matthew Cassel)

An American in Tehran

The ‘Green Revolution’ won’t come as soon as we think it will.

Many in the opposition movement told me with certainty they had the support of the overwhelming majority of Iranians. But in the city's working-class areas, I found another Iran.

For a critical response to this article, see Danny Postel's "Iran’s Green Movement, the Basij and the Question of Violence."

I awoke as the plane’s wheels touched the ground. Two women in the row ahead of me secured their scarves over their heads, and I popped some gum into my mouth to cover up any lingering scent of alcohol on my breath. Pulling up to the gate, I glimpsed the red, white and green flags with the distinctive “Allah” logo in the middle, welcoming me–I hoped–to the Islamic Republic of Iran.

I was going to Iran in the midst of ongoing protests that began following last June’s contentious presidential elections. As an American journalist who has worked in the region for years, I was invited to give a talk at a media conference on the Western media’s coverage of the Middle East.

I stood in line at customs. A guard wearing a trimmed beard–a sign, I was later told, of one’s faith and loyalty to the regime–waved me forward. After looking at my passport, he locked eyes with me briefly before shaking his head in disappointment. I smiled uncomfortably while he processed my information.

Paranoia about Americans isn’t entirely unjustified for a man in his position. In 1953, an ambitious CIA agent named Kermit Roosevelt flew to Tehran with a suitcase full of money and proceeded to help overthrow the democratically elected government by funding its political opponents and paying off various opportunists. This established the pattern for U.S.-Iranian relations until the 1979 revolution.

When the guard had finished entering my information, he waved my passport at another man, who led me to a small room, fingerprinted me, and told me to sit on a bench off to the side. After a few minutes the guard returned and said warmly in clear English, “welcome to Iran.”

I stumbled outside where my hosts were waiting and apologized for the 30-minute delay. One friend shouted “No problem!” as he embraced me with his arm around my shoulders. “Nothing compared to if I tried to enter the United States,” he said smiling. “Not even close,” I replied.

“Welcome to our revolution,” said a friend of an Iranian friend in Tehran. “Thank you,” I replied as we shook hands. “But which revolution do you mean?”

She laughed for a second before firmly grabbing my arm. “We have only just started,” she said. “Our movement is growing by the day, and soon we will succeed. Yes, we support Mousavi for president–he is the true winner of the elections. But it does not end there. We want to get rid of this fucking system. All of it!”

The growing internal tension in Iran culminated after last year’s contested elections, when conservative Mahmoud Ahmadinejad–backed by Khomeini’s successor, Ayatollah Khamenei–faced off against the leading opposition candidate, Mir-Hossein Mousavi. Mousavi was seen as the reform candidate who would restore political and cultural freedoms that Ahmadinejad had rolled back.

A tight race was expected, but Ahmadinejad declared victory with nearly two-thirds of the vote. Mousavi, the closest runner-up, took around one-third. His supporters, dressed in green, the color of his campaign, immediately took to the streets, claiming voter fraud.

Most young people I met were supporters of Mousavi and had taken part in the demonstrations. But while exploring Tehran, I followed the path of most foreigners in the capital, visiting areas and people–artists, filmmakers, writers–comprising the city’s bohemian culture.

Too young to have lived under the Shah, they want to organize freely, dress however they choose, drink alcohol, freely access the Internet and watch uncensored films. As one woman put it, “We don’t want to live in a stupid system led by someone who says he takes orders only from God!”

Another young Iranian woman who grew up mostly in Europe and voted for Mousavi told me, “I protested after the elections, but only at first. It isn’t worth making the ultimate sacrifice–my freedom.” She referred to the dozens of protesters who were killed and the hundreds who remain imprisoned, and said she was unsure whether the elections were rigged. Most people she knew in Tehran had voted for Mousavi, but “Iran is a large country,” she said, “and most of its population lives outside Tehran. Many people here, including me, do not understand this part of Iran.”

Many in the opposition movement told me with certainty that they had the support of the overwhelming majority of Iranian society. But in the city’s working-class areas, I found another Iran. Few felt the need to criticize the government. They were more concerned with selling me furniture, children’s clothes, or plumbing materials, or they took no interest in me at all.

This is the sort of place from which Ahmadinejad–who ordered his government to deliver sacks of potatoes to rural areas before the elections–draws his support. He appeals largely to religious conservatives and people who, like him, come from less-privileged backgrounds.

Mousavi, meanwhile, has re-emerged as a reformer after two decades absent from politics. He is seen as a fresh face in Iranian politics, yet Mousavi is very much a product of the revolution. He served as prime minster from 1981 until Khomenei’s death in 1989, during which time he oversaw the imprisonment and execution of thousands of leftists and other opposition figures. Many of today’s protesters would have been among those he persecuted, had they been active in the 1980s.

At the media conference, a filmmaker who produces documentaries about social justice in Iran and the Middle East introduced me to a young colleague. “This is a Basiji,” he said to me. The Basij had become a household word after the elections, when images of them beating protesters were broadcast around the world. Originally a volunteer force created to maintain order after the revolution, the Basij played an important role in Iran’s war with Iraq in the 1980s. Today they operate as a civilian police force with close ties to the Revolutionary Guard.

I tried to picture this timid young man on the back of a motorcycle with a club in his hand, bashing the heads of other young Iranians. After he warmed up a bit and asked me for a cigarette, my friend insisted that he lift his pant leg. When he did so, I saw a freshly healed bullet wound just below his knee. “Mousavi supporters did this,” my friend said.

I looked to the young Basij member. “Mousavi?” I asked him, and pointed to the wound. “Yes. See, you don’t know anything!” my friend shouted. “It wasn’t like what you saw outside.” He smiled at the fact that the televised street battles had not been as clear-cut as I believed.

Partly because of the Iranian government’s tight clampdown on foreign and local media, it was difficult for people outside the country–and even inside–to have an accurate picture of what was happening on the ground. While media showed the brutal repression of protesters by government forces, news stories provided little context about modern Iranian history and Mousavi’s political past.

Many in the West with little previous interest or knowledge of the Middle East have became ardent supporters of the protests in Iran. Internet users around the world changed their avatars on sites like Facebook and Twitter to shades of green to express solidarity with the “Green Revolution.” But the election was not a referendum on the Islamic Republic. It was largely a contest between two politicians: the conservative and the reformer. Both men, though, are very much a part of the system.

I’ve been asked if this is the making of a new revolution in Iran. I responded with the example of Egypt–where practically all people from every background are united in their hatred of the dictatorial regime of President Hosni Mubarak–as a country much closer to revolution. The difference is that Egyptian workers, journalists and other activists protesting for years have not enjoyed round-the-clock coverage of their struggle.

After the recent Muslim holy day of Ashura in December, when opposition protesters again took to the streets (albeit in much smaller numbers than last June), a massive rally was held by Ahmadinejad’s supporters to “put out the flames,” as one Iranian friend put it, by sending a clear message to the opposition: You are not the majority.

The Shah wasn’t able to stage massive pro-government rallies in the streets to quell opposition protests in the late 1970s. The fact that Ayatollah Khamenei and Ahmadinejad can signals that getting rid of “the fucking system” may not be as easy as some of those in today’s opposition–and the U.S. government–would hope.

Matthew Cassel is a photographer and journalist from Chicago who has lived in the Middle East since 2004. He worked with various human rights organizations in occupied Palestine before starting a media school for youth in a West Bank refugee camp. He is currently based in Beirut, Lebanon. His website is JustImage.org.