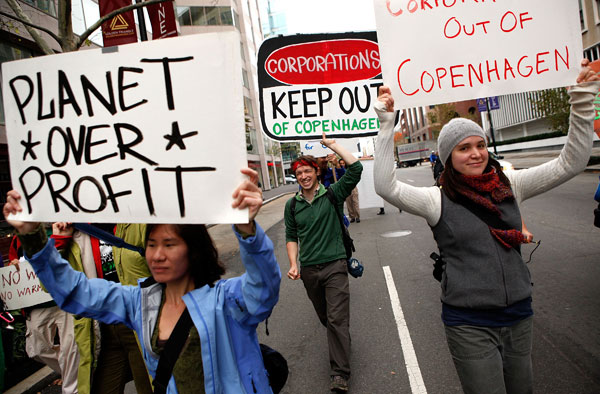 Activists protest during a march against allowing corporations to participate in the Copenhagen Climate Conference, on November 30, 2009, in Washington, D.C. Mobilization for Climate Justice organized the march to call for solutions to climate change. (Photo by Alex Wong/Getty Images)

Marching or signing a petition is a surefire way to find happiness, researchers say.

Kasser says that activism 'does a fairly good job at satisfying' the four psychological needs that must be met for a person to be happy.

People engaged in political activism are more likely to live happier and more fulfilling lives than the average person, according to two psychologists writing in a recent issue of the journal Political Psychology.

“There is something about activism itself that is beneficial for well-being,” says Tim Kasser, co-author of the research paper, which is based on studies of college students. “We found that activists were feeling more autonomy and more personal growth. They also felt they had better relationships, more purpose in life, and they liked themselves better.”

Kasser teaches psychology at Knox College in Galesburg, Ill. His collaborator, Malte Klar, is a professor at the University of Göttingen in Germany. In one experiment, they asked one group of students to think about food in an ethical way–that is, about whether the food was traded fairly and organic. They asked a second group to think about whether they liked the taste of the food and its price. Both groups were then asked to write letters to the head of the dining services, discussing their particular perspective.

“The people who had been thinking and writing about the ethical aspects of the food ended up feeling more vital, alive and energetic than did the people who had just been writing about the more self-oriented, hedonistic aspects of the food,” says Kasser, who adds the positive effects were clear despite the small amount of effort the students expended. “Basically, all they did was write a letter.”

Activism fulfills human needs on several levels. According to the study, it satisfies one’s eudaimonic needs–the need for a sense of meaning and purpose to life. More superficially, it fulfills the hedonic need to feel pleasure.

Kasser says that activism “does a fairly good job at satisfying” the four psychological needs that must be met for a person to be happy: autonomy, competence, security and connection to others.

“I don’t doubt that part of the reason activism is good for people’s well-being is that they experience higher levels of connection to other people,” Kasser says. “We are not trying to say that the only way to increase your well-being is through political activism, but we are saying that it is a good one.”

Kasser reckons that being mad about something–environmental degradation, for example–can motivate some people. He resists the idea that activism should be a catalyst for anger. On the other hand, activism will benefit you no matter what the motivation.

“You can be angry about some social injustice that you see, and if you engage in activism, it may not make your anger go away, but it seems like it provides you with other kinds of well-being, probably because you know you’re trying to do something about the thing you’re angry about,” Kasser says.

In their first two studies, Klar and Kasser measured two different kinds of activism. One is conventional activism. It includes actions like marching on the street, signing a petition or writing a letter to your senator. High-risk activism, on the other hand, is engaging in radical behavior like breaking windows or directly confronting the police.

Kasser adds that activism is one area where the close connection between the personal and the political–the individual and society–is very clear. “The data show that it may improve your well-being,” Kasser says. “[A] thriving democracy can only survive if the people are politically active.”

Robin Petré is a student at the Danish School of Journalism and an In These Times intern.