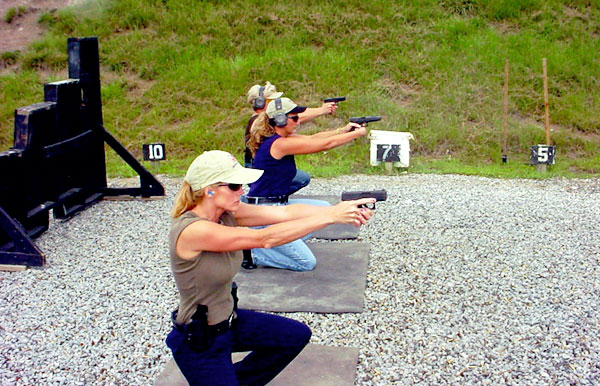 Xe’s training division goes by the name U.S. Training Center. According to the center’s website, the “Home Defense” course will make “armed citizen[s] more aware of personal security whether at home or away” as they go about their duty of “protecting self and family members.”

On the company website, Tammy G. offered this testimonial, “While I hope I never have to put the skills into practice defending myself or my son, I feel like I now have the tools necessary to do that wisely and safely.”

The two-day course, which is limited to 12 participants, has as a prerequisite “basic pistol marksmanship” and costs $400, not including room and board. Provided for this fee are a holster, a magazine carrier, 100 rounds of Simunition ammunition, safety gear to protect the wearer from head to groin, and a Simunition pistol–a Glock, Sig Sauer or Beretta, your choice. Further, it is “highly recommended” that students provide their own cover garment “for concealed draw.”

Should you choose to enroll in the class, 25 percent of your time would be spent in classroom lectures and 75 percent with “practical instruction.” Topics explored include “use of force,” “force-on-force scenarios,” “away from home considerations,” “mindset/indications of mental state,” “basic room clearing techniques for the homeowner” and “dealing with police.” The course description concludes with this “disclaimer” (in bold): “Local authorities should be consulted on use of Lethal Force and the use of Lethal Force to defend lives and property.”

In these uncertain times, the concerned citizen can’t be too careful. According to the company website, “The students will receive classroom instruction and will engage in shoot/no-shoot, force-on-force realistic scenarios based on actual events that have occurred where their decision making process will be explored and tested.” According to the U.S. Training Center website, the ultimate objective of “Home Defense” is to “inform the concerned citizen on methods of protecting the home front.”

What kind of “home front” scenarios does this course prepare you for? The “Home Defense” course description doesn’t say, but knowing that Erik Prince is Blackwater’s founder and owner provides a clue.

In a sworn affidavit, filed in a Federal court in Virginia last August, a former Blackwater employee, known as John Doe #2, said that Blackwater founder and owner Erik Prince “views himself as a Christian crusader tasked with eliminating Muslims and the Islamic faith from the globe.”

The former Blackwater employee said: “Mr. Prince intentionally deployed to Iraq certain men who shared his vision of Christian supremacy, knowing and wanting these men to take every available opportunity to murder Iraqis. Many of these men used call signs based on the Knights of the Templar, the warriors who fought the Crusades … Mr. Prince operated his companies in a manner that encouraged and rewarded the destruction of Iraqi life. For example, Mr. Prince’s executives would openly speak about going over to Iraq to ‘lay Hajiis out on cardboard.’ Going to Iraq to shoot and kill Iraqis was viewed as a sport or game.”

In his book, Blackwater: The Rise of the World’s Most Powerful Mercenary Army, Jeremy Scahill describes Prince as a man “dedicated to a Christian-supremacist agenda.” Looks like the company’s classes ensure all’s white on the Western front.