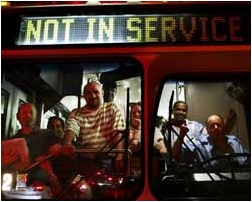 Commuters stand in a bus in New York City.

Electricity Markets and the Blackout

BY Dave Lindorff
Share TweetReddit0 EmailPrint
When California suffered its energy crisis two years ago, it was first presented as a problem of too little generating capacity and too much demand.

It later turned out that the crisis had been man-made. A group of energy companies, led by Enron, had conspired to create shortages of both electricity and natural gas, even to the point of shutting down generators during a period of peak demand, so as to cause a spike in prices. With the state obligated to make good on electricity delivery, the companies were able to gouge ratepayers and taxpayers for billions of dollars.

Now the game is being played in the Northeast, where instead of brownouts, it’s a massive blackout, reminiscent of the blackouts of 1965 and 1977.

While engineers are trying to pinpoint the technical cause of this deadly blackout, which has already claimed at least three lives (a number that will surely rise when accidents caused by lack of stoplights, and other types of incidents are added in), the reality is that just as in California, it was not a glitch, but the marketplace that was behind this latest energy crisis.

The media are talking about a “creaking” power grid, as though the problem is that the Northeast electric grid is an old clunker. Nothing could be farther from the truth. It’s the modern, interlocking and computerized nature of the grid that brought it down.

Years back, power companies were regulated public utilities which provided power to designated and discrete regions. Their rates were established by public regulatory bodies, which set specific profit levels for the companies, and allowed rate increases after public hearings established a need for an increase. Electricity could be shifted from one region to another, but only by deliberate negotiation and careful advance planning. It was a flawed system, it had its problems, but it worked.

In the 1990s, however, privatization arrived in the energy sector with a vengeance, and through three presidencies—Bush I, Clinton and Bush II—the notion was pushed that deregulating the utilities industry and creating a market for electricity—much like markets for oil, cotton and stocks, with spot and futures trading to establish prices—would lead to greater “efficiency” and cost savings.

By 2000, some regions—notably the Mid-Atlantic and New England, followed by New York—had begun to establish these electricity markets. Instead of negotiating long- term purchases of electricity for months at a time at set prices, power producers and power distributors began to buy and sell electricity contracts on a daily, hourly and even minute-by-minute basis.

At the Mid-Atlantic power consortium’s headquarters, called PJM Interconnect in Norristown, Pennsylvania, an Internet market was actually established, where electricity can be bought and sold automatically, as prices in one regional market rise above prices in another.

Here’s how it works: say a utility in Florida was reaching peak load because of a heat wave. As its less-efficient, costlier generators were put on line and revved up to full power, the company’s cost of power would surge to as much as $1000/megawatt hour. The company, however, was programmed to seek out and buy, over PJM’s Internet energy market, electricity being produced elsewhere—say in Pennsylvania or New York—at a lower rate. So huge volumes of electricity would then be routed south, through several grids, to reach the user in Florida.

Ken Laughlin, vice president of market services at PJM, described one case where the Pennsylvania area was suffering such a heat wave and local generating capacity was approaching overload. Suddenly, he says, utilities as distant as Florida and Texas, detecting the high prices being paid by Pennsylvania utilities for extra power, began automatically selling their power into the Pennsylvania grid, and the crisis abated—of course at a high cost to consumers.

In the abstract, the idea is that this kind of instant market for electricity allows for the most efficient production and use of power. The reality, as the latest blackout illustrates, is something else. Not only is the transmission of power over long distances hugely inefficient (leading to upwards of 30 percent loss of energy to heating of the high tension lines), but by linking all the systems, and encouraging them to automatically shunt huge tidal waves of electrons across overloaded transmission lines, based upon the price differentials between different power regions, the system invites just the kind of crash we have seen. Moreover, because all the regions had to be tightly linked into a grid in order for such a market to function, the wave of shutdowns that occurred was made all the more likely.

The Bush administration is now calling for a “modernization” of the nation’s power grid. But absent better regulation, the so-called modernization being called for is almost certain to involve further development and expansion of the grid and the electric power market, as well as construction of even more high-cost power plants, instead of an increased focus on conservation and reduced electric demand.