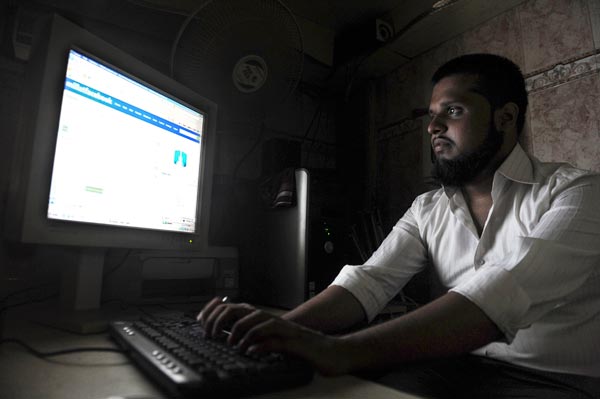 A Pakistani man browses the Internet in Karachi. A Pakistani court ordered authorities to restore access to Facebook in May, nearly two weeks after blocking the site in a row over blasphemy, but hundreds of web links remain restricted.

Will social networks change our world, or just reinforce it?

When we pretend the Internet is a social utopia, we do a disservice not just to each other, but also to younger generations and their understanding of how social networks function.

No doubt about it: Social networks have landed in our culture, and they’re planning to stay awhile. During late 2008 and early 2009, Facebook doubled in size, growing from 100 million registered users to 200 million in eight months, and topped the 400 million mark by early 2010. Twitter’s popularity also skyrocketed during 2009, jumping from 4.5 million visitors to more than 20 million.

And yet, for all those impressive numbers, and for all the horn-tootin’ over the disruptive and democratizing potential of the Internet, we’re still seeing the Big Important Conversations dominated by the same old, same old. Despite the fact that women, for example, make up more than half of the active users on most social networking sites, we still usually see men served up as the expert voices on social networks, on blogs and in mainstream media. Or, even though African Americans are more likely to use Twitter than white people, white people are given the role of experts, speaking at conferences, on top 10 lists and more.

The Internet is deceptively equal. We don’t know, or we’re not willing to recognize, that we have transposed to the Internet the same social structures we’ve been living with for hundreds, maybe thousands, of years. We’re painting our understanding of the offline world–with all our prejudices, biases and hierarchies–onto the canvas of the Internet.

Just as in real life, people congregate at different services and networks online, and the reasons often have to do with our cultural and social identity. When we pretend the Internet is a social utopia, we do a disservice not just to each other, but also to younger generations and their understanding of how social networks function. In a 2006-07 study, noted technology researcher danah boyd found that teen users on social networks were not just seeking out those like themselves; they were also displaying class and racial tensions toward users who didn’t congregate where they did–who weren’t like them. “What happened,” boyd writes, “was modern day ‘white flight.’” Whites and the educated were more likely to leave MySpace or choose Facebook. This is not a legacy we want to leave when there is so much potential for fundamental change.

Gender roles also play an important part in how we use social media. Women are more likely to use social networking to deepen their existing relationships rather than to make loose, acquaintance-like new connections. The focus on “deep” versus “many” connections can leave women out of the professional networking game in a big way, a dangerous proposition as our culture becomes increasingly reliant on relationships and connections formed online.

But this shift also enables us to build authority on the basis of the quality of our ideas, rather than on a stacked deck of influence based on social structures like gender, race and class. To be dominant in older social hierarchies, we had to have a lot of things going for us, including how we looked or where we came from. In the social network sphere, we are the ones determining what and who is relevant and influential to the work we’re doing and the lives we’re living.

As social networks shift our perceptions of authority, we have to guard against the problems that can arise when large numbers of people have access to information without context. Institutional authorities provided this context in the past. Now that another, more organic kind of authority plays a larger role in how and how quickly we receive information, we have a new responsibility to ensure that the reporting we share is accurate.

If we can assume this responsibility, the potential for social justice movements may be limitless. Armed with the power to subvert traditional power structures by establishing our own authorities, we may be able to escape the hierarchies that have kept our stories from reaching one another. We can change whom and what we consider influential and–as long as we develop the skills we need to act responsibly in the face of a flood of new information–we can tackle the societal structures that constrain us.

This shift in authority offers opportunities for progress, but deep and lasting change won’t emerge unless we also recognize the biases we bring to the table. The ease with which we share information enables us to engage with social justice issues at speeds previously unimaginable. But that speed can come with traps. If we want to connect with each other in ways that will support change in the world, we must learn to maneuver around old-style thinking that keeps us out of important discussions and around networks that unintentionally marginalize others.

The Internet’s lack of institutional structure shouldn’t be confused with equality. Funny thing: When you remove explicit structure from a group (leaders, hierarchies, process) it turns out that implicit structure arises–structure based on people’s personal biases, prejudices and class interests.

When implicit structure takes over, we run the risk of entering a series of vicious cycles that prevent fundamental, systemic change from emerging. By pretending that these implicit biases don’t exist or don’t matter, we ignore the voices of those most affected by the issues we care about, and we reinforce the very power structures that we seek to break down. In a seminal 1970 paper, feminist scholar and author Jo Freeman labeled this phenomenon of marginalizing minority-represented voices “the tyranny of structurelessness”:

This means that to strive for a “structureless” group is as useful, and as deceptive, as to aim at an “objective” news story, “value-free” social science or a “free” economy. A “laissez-faire” group is about as realistic as a “laissez-faire” society; the idea becomes a smokescreen for the strong or the lucky to establish unquestioned hegemony over others. … Thus “structurelessness” becomes a way of masking power.

Our tendency to congregate around like-minded folk is understandable and human, but it can be dangerous when organizing around issues for change. This doesn’t mean reaching out to opposing viewpoints at every juncture. It does mean we need to look hard at who is most affected by the issues we’re working on and ensure that they’re being heard. Engaging with and listening to people who have different backgrounds from our own starts a fundamental process for change, and social networks hold a lot of promise for making the networks we belong to more diverse.

How do we engage with diverse groups of people in online public spaces? Generally, those with the largest audiences will continue to build their audiences exponentially. But we’re not just talking about audience size–we’re talking about multiple conversations, and effective ones at that. In order to have those conversations, though, we have to chart a course of action that acknowledges our biases, so we can then start reaching out and connecting with people who don’t share our same points of reference. When we do this, we will change the world.

This essay was adapted from Zandt’s new book Share This! How You Will Change the World with Social Networking (Berrett-Koehler Publishers).

Deanna Zandt is a media technologist and consultant to key progressive media organizations including AlterNet and Jim Hightower's Hightower Lowdown, and hosts TechGrrl Tips on GRITtv with Laura Flanders. She is the author of Share This! How You Will Change the World with Social Networking (forthcoming: Berrett-Koehler, May 2010).