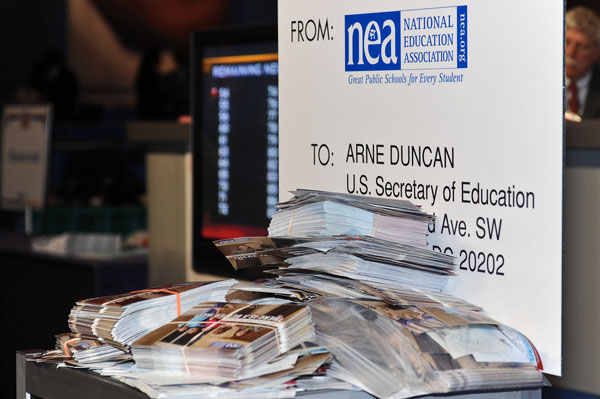 Obama and the Teachers Unions

The administration’s ‘Race to the Top’ program is fraying the traditional alliance between Democrats and organized teachers.

Obama has emphasized his commitment to reforms 'developed with teachers, not imposed on them,' but many union members are feeling ignored.

At their annual convention in July, National Education Association (NEA) members narrowly approved a vote of “no confidence” in Race to the Top, a cornerstone of Obama’s education reform plan. For each of the last three years, the NEA has hosted either Obama or his education secretary, Arne Duncan, at its annual convention. But this year, amid calls for Duncan’s resignation, neither was invited. The American Federation of Teachers (AFT), another national teachers’ union, has also distanced itself from the administration in the months since the Race was announced in July 2009.

Of the $100 billion earmarked for education in the American Recovery and Reinvestment Act (aka the “stimulus bill” passed in January 2009), $4.35 billion was repackaged as incentive for states to reform their education policies along new federal guidelines. States that show the most commitment to significant reform are rewarded with millions of federal dollars.

But the direction of these reforms has many teachers and union leaders concerned. Required changes include expanding charter schools; linking teacher pay to student test scores; enabling districts to dismiss entire staffs of failing schools; and weakening teacher tenure–policies that have long been opposed by teachers’ unions.

While Obama has emphasized his commitment to reforms “developed with teachers, not imposed on them,” many union members are feeling their concerns ignored. “In some states, union members were completely left out of the reform process,” says Illinois Education Association (IEA) president Ken Swanson. “They were frozen out, and things were changed without their input… Sometimes it was intentional.”

With at least 30 states now introducing significant cuts in K-12 education in the recession’s wake, the stakes are high for both unions and state governments and the battles often bitter. Due to union opposition and concerns about federal power, nine states opted out of the first round of the Race, completed early this year. That number increased to 15 for Round 2 of the competition, which is set to finish next month when the Department of Education doles out just under $3.4 billion.

While the federal government can’t just dictate national education policies to states, it can use funding to get what it wants. Union participation in the reform process is clearly not a priority. On the 500-point scale used in the competition (states earning more points are more likely to receive funding), a state may receive up to 10 points for having “support from a broad group of stakeholders,” including community leaders and unions. This pales in comparison to the 138 points states receive for adjusting policies toward teachers, including introducing merit pay systems based on student performance on standardized tests. Requirements like this have pitted union members and state governments against each other in many areas.

The battle between unions and state officials was particularly fierce in Minnesota. The state was one of the 41 states to compete in the Race’s first round, but sat out the second round, having failed to pass an education reform bill by the January deadline. According to Tom Dooher, president of Education Minnesota, the statewide union affiliated with both the NEA and AFT, this had a lot to do with unions being marginalized in legislative negotiations, as well as lack of support for a merit pay plan called “Q-Comp” added to the Minnesota bill. Of the 300 school districts that agreed to participate in the Race if the state were given money, only 36 had union support. In an open letter to Duncan in January, Dooher said the union was most opposed to “the literalness of [Minnesota’s] efforts to adhere to the federal guidelines.”

According to Jeanne Scarr, a negotiator and board member of Centennial Education Association (CEA), a suburban Minnesota branch of the NEA, districts and states have little incentive to work with teachers unions. In her district, Q-Comp and other proposed policy changes were “very well received by the school board. They had nothing to lose by signing on to it,” she said. “The lack of union support was a tiny fraction of the points needed.”

State officials clearly took note of this fact in Colorado. After failing to receive money in the first round, Colorado legislators passed a sweeping set of reforms that include merit pay, increasing reliance on standardized tests, and significant changes to tenure rules. But union leaders say these reforms go far beyond what is required to compete, and also cost much more than the Race can provide. The Colorado Education Association (CEA) has pointed to estimates as high as $80 million per year for developing the new tests required by the bill as unfeasible for cash-strapped districts, with or without Race funds. While the program may provide up to $175 million to the state, that money is a temporary stimulus, and only intended for reforms approved by the federal government.

Moreover, as CEA president Beverly Ingle points out in a recent Denver Post op-ed, Colorado has already cut more than $360 million in next year’s education budget. If these numbers are correct, even if the state wins Round 2, Colorado schools could face a large deficit, which critics say would fall mostly on local districts. For these reasons, the CEA stood firm in its opposition to the bill and the Race, a move that the Post strongly criticized.

And in Texas, reforms faced opposition from both right and left. Like Dooher, Texas AFT president Linda Bridges submitted an open letter to Duncan in September saying that such a “modest and fleeting contribution to the state’s budget” could not justify fundamentally changing Texas’ education policy. The combination of AFT opposition and Governor Rick Perry’s concerns about expansive federal power has led Texas to opt out of the Race thus far. While such opposition is all the more forceful given the state’s $18 billion deficit, a statement from the governor’s office estimates that passing reforms required for the Race would cost “upwards of $3 billion.” Tellingly, even states as large as Texas can only receive up to $700 million in the second round.

While Obama has talked about using “the collective bargaining process as a catalyst for reform,” the reality is much more ambiguous. In many cases, states seem to be rewarded for ignoring union concerns about the effects of reforms and their cost. And while states are rhetorically encouraged to work with unions in crafting legislation, Duncan has downplayed this as “by no means the determining factor” in the competition. The irony is that both the AFT and NEA have been strong supporters of Democrats in the past, and especially of Obama. Unions collectively gave more than $5 million to Democratic candidates in the 2008 election, and education ranked third in top industries supporting the Obama campaign. If the rift between Democrats and teachers’ unions continues to widen, this political and financial support may not last.

From Washington’s perspective, however, union shortsightedness is derailing efforts to reform a system in crisis. In a 2007 speech, Obama noted that 6 million American students are reading below grade level, and that only one in ten black and Latino eighth graders is proficient in math. “This kind of America is morally unacceptable for our children,” he said. Frustrated that America’s education system appears to be failing and impatient with traditional channels of reform, Obama and Duncan believe that U.S. schools suffer from fundamental, structural problems that no one group can adequately address.

But while teachers don’t disagree that American education has serious problems, many feel that they and their students are being unfairly blamed for issues that need to be addressed more collectively. “Let’s talk about getting a kid from point a to point b in their lives,” says Scarr. “For some kids it means helping them deal with their parents’ divorce and getting them in the classroom.” With undue focus on testing, she says, “we’re forced to ignore these things… We do leave children behind if they don’t do well on tests.”

Likewise, for Swanson, most of a child’s education cannot be quantified or measured on a standardized test. “Education depends on support–family support, community support, adequate resources,” he says. “We have to remember that there are a whole lot of institutions that factor into that child’s overall education.”

What role the federal government will play in that education will be decided later this year, when Duncan announces the next batch of Race to the Top “winners.”

Sam Ross-Brown, a student at the University of Minnesota, was a summer 2010 In These Times editorial intern.