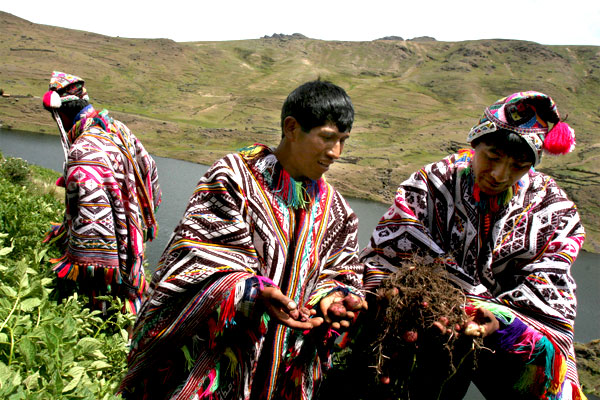 Peru, birthplace of the spud, struggles to protect its biodiversity.

An embrace of these potatoes is part of a wider shift in Peru toward pre-Spanish traditions. But the growing appetite for papas nativas worries some biodiversity advocates.

HUANCAYO, Peru–It is Saturday morning, and I am in the main food market of the provincial town of Huancayo, high in the Andes of Peru. In the potato section of this market, dozens of porters are hustling through with huge sacks on their backs. At 8:30, they are competing for space with a throng of intrepid shoppers, willing to brave the mayhem in order to choose from more than a dozen popular Peruvian varieties–and to pay homage to a food that is both a delicacy and way of life.

Standing behind her neat display of potatoes, Nelida, wearing a blue apron, eyes the passing shoppers. “Fresh amarillas,” she cries. “Look how good they are!”

Her mantra-like declaration inevitably draws customers. Potatoes are popular in Peru, the birthplace of the spud. Five years ago, David Spooner, an American scientist, analyzed the DNA of wild and cultivated potatoes, and concluded that all modern varieties can be traced back to a single spud grown in southern Peru 7,000 years ago.

Besides dozens of commercial varieties of potatoes, Peru is home to thousands of types of papas nativas. These exotic potatoes are both fueling culinary traditions that nourish a distinctive regional cuisine and sustaining a rural lifestyle that has long roots and increasingly vocal defenders.

Peru’s native potatoes are generally grown by Quechua Indians in remote communities nested high in the Andes, where farmers use techniques passed down over generations. One morning I set out to visit Leoncio Escobar Quinto, who is reputed to grow 150 different varieties on four small hillside patches at elevations above 13,000 feet.

His village, Dos de Mayo, has no electricity or running water and the land, while fertile, must be farmed at steep angles. On reaching his fields, Quinto, 30, wades into a long row of potato bushes. It is February and the bushes are flowering. He sprinkles what looks like fairy dust on the bushes nearest to him, explaining that the secret to growing healthy, tasty tubers is to feed them a mix of herbs that are boiled, dried and then turned into flakes.

“My father was a good potato farmer, but I am better,” Quinto says. In recent years, every July 24, on Peru’s National Farmer’s day, he bags about 100 varieties of potatoes on his land, jumps on his only horse, rides an hour and then boards a bus that delivers him to a potato competition.

The competitions were conceived by city dwellers, but they’ve raised the status of native potatoes even in the minds of farmers such as Quinto. At the annual event, he swaps varieties with farmers in faraway communities and is proud that, at least among fans of exotic spuds, he’s a minor celebrity.

Quinto rarely sells his potatoes; there is no demand, he says. He, his wife and their six children consume nearly all they grow, and sometimes they (and their neighbors) run short of food. A local aid agency brings bags of rice to the community, and this evening, rather than potatoes, he eats a bowl of donated rice. His wife and children do the same.

To collect and protect

The late, great scholar of native potatoes in Peru, Carlos Ochoa, was the author of two massive studies of wild potatoes, one devoted to Bolivia and the other to his native Peru. He earned a degree in plant pathology from the University of Minnesota and published his first paper on wild potatoes in 1951.

“I was alone, completely alone, for several decades,” Ochoa recalled, before his death at the age of 80. Yet his work breathed life into Peruvian agriculture. He bred some of the first commercial varieties in Peru and identified an astonishing number of wild potatoes, his reputation ultimately resting on his vast collection, which became part of the seminal holdings of the International Potato Center (IPC) in Lima. The IPC maintains two duplicate seed inventories of native Peruvian spuds. These inventories are costly, because of the special storage required and the need to replace each variety with a new seedling every two years.

Ochoa was disappointed that the IPC stopped collecting new varieties of potato. Yet the abandonment of collecting as a central activity makes sense. So many Peruvian laws and international arrangements now govern indigenous plants that cooler minds reckon it is better to not know what exactly is out there, for fear that some government or corporation will make a claim on it.

Yet Ochoa still collected wild potatoes, his enormous standing as an expert providing a form of moral and practical defense of his passion. A month before we met, he hired a car and driver and headed into the mountains in search of an elusive rare potato that is prized by nomadic jungle denizens but that Ochoa feared was on the verge of extinction. He failed to find the little spud that day but, he said, “I did carry off a wild species I’d never seen before.”

Not all growth is good

Ochoa’s point was that without more painstaking research, people may lose some of the extraordinary potato variety in the Andes–and with this loss of biodiversity, people may lose medicinal or nutritional qualities of unimagined import. I get a glimpse of the elusive properties of wild potatoes when I visit a pristine valley about one hour from Cusco, the historic center of the Incan empire and Peru’s most popular tourist destination. With the help of a group of Cusco activists called the Andes Association, six farming communities have come together to form Parque de la Papa. The park is a showcase of traditional Indian life and a center of enthusiasm for papas nativas.

One afternoon, Lino Mamani, a potato guru, takes me on a short adventure through the heart of the park. As we walk up a hillside we see a riot of colors–purples, reds, blues–signifying the tubers in bloom. Mamani, 50, hails from a line of super-farmers and he can distinguish between even tiny spuds by viewing the foliage.

In this sprawling field, there are believed to be 900 different types of potatoes. Mamani seems to know each one. Cat-like, he crawls along a row of bushes, and begins pulling out tubers. A single row can harbor a half-dozen varieties, of odd shapes and sizes.

Mamani keeps digging, searching for a rare tuber he calls ruki. The spud is no larger than a pea, and is believed to protect the face against sunburn. When he finds this miniature tuber, I marvel as much over its perfect roundness as small size. He crushes it between his fingers and applies it to his face.

For fans of wild potatoes, commercialization poses a potential threat as well as an opportunity. Back in Lima, the IPC has an ambitious project to create a broad-based market in Peru’s cities, especially Lima, for wild potatoes. The biggest chain has agreed to carry bags of these potatoes, and no two bags contain the same spuds. That’s crucial to any mass market. “There’s a rediscovery of the potato in Peru,” says Willy Roca, an expert in Lima. “People are much more conscious of potato diversity than 10 years ago.”

Peru’s elite is, of course, Europeanized and native potatoes reflect traditional Indian culture. So an embrace of these potatoes is part of a wider shift in Peru toward pre-Spanish traditions. But the growing appetite for papas nativas, while a welcome trend, worries some biodiversity advocates.

“Markets don’t buy biodiversity,” Roca notes. “They tend towards uniformity.” That’s why he’s ambivalent about promoting native spuds. “If one variety gets highly popular, everyone will switch to growing it,” and valuable varieties will be abandoned. Roca worries: “You end up with two or three successful varieties–and the rest get ignored.”