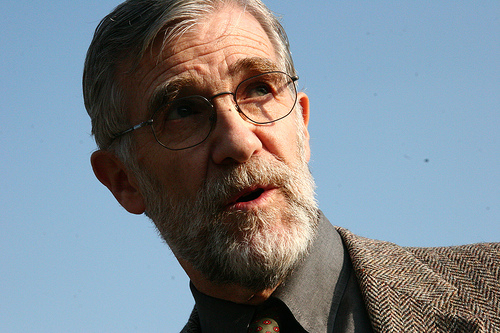 We will be getting a steady diet of this kind of punditry: 'Waterboarding is merely something that a bunch of liberals associate with torture.'

Former President George W. Bush continues to be beyond shame. Those favored with an advance copy of his memoir, Decision Points, say it paints a picture of a totally unapologetic Bush bragging, for example, about authorizing the CIA to waterboard 9/11 “mastermind,” Khalid Sheikh Mohammed (KSM).

According to newspaper accounts of the memoir, Bush says he was asked by the CIA for permission to subject KSM to the technique that creates the sensation of imminent drowning. His response was: “Damn right.”

For such a frank admission of high-level criminality, we can say, with ample justification, Shame on Bush. But that shame also sticks like Saran wrap to the rest of us – and especially to the Fawning Corporate Media (FCM), which has soft-pedaled the significance of Bush’s confession, and to his make-nice successor, Barack Obama, who has refused to demand any accountability.

However, if we are still a democracy, we are all complicit.

I don’t much care if this sounds judgmental. You see, I was alive during World War II when there was torture galore; then it was considered a grave offense. The Nuremberg Tribunals tried and convicted Germany’s leaders for torture and other war crimes. In the war’s aftermath, there were a very few serious people arguing that the world should simply look forward, not backwards. The vast majority knew there had to be a reckoning, even amid the many serious crises that were facing a war-ravaged world.

The chief U.S. prosecutor at Nuremberg, Supreme Court Justice Robert H. Jackson, insisted that the civilized world had no choice but to demand justice. He looked the Nazi leaders straight in the eye and told the court:

“No charity can disguise the fact that the forces which these defendants represent … are the darkest and most sinister force in society,” Jackson said. “By their fruits we best know them. Their acts have bathed the world in blood and set civilization back a century. They have subjected their European neighbors to every outrage and torture. …

“The real complaining party at your bar is civilization. … Civilization asks whether law is so laggard as to be utterly helpless to deal with crimes of this magnitude by criminals of this order of importance.”

The prescient Jackson foresaw a time when not just the vanquished Nazis, but also America’s own leaders might deserve to be put in the dock:

“But the ultimate step in avoiding periodic wars … is to make statesmen responsible to law. And let me make clear that while this law is first applied against German aggressors, the law includes, and if it is to serve any useful purpose it must condemn, aggression by any other nations, including those which sit here now in judgment.”

Sadly, it is now clear that U.S. officials do not believe they should be held to that universal standard, and that the Nuremberg principles and other international laws need not apply to decisions emanating from the White House.

Rather than facing a stern judgment for his criminal actions, including approving torture and authorizing aggressive war against Iraq, George Bush is about to be lionized in Dallas over his presidential library, in bookstores for his memoir, and in the FCM. Two articles in the New York Times’ “Week in Review” section on Sunday cited Bush’s memoir as a possible turning point for Americans viewing the ex-President more favorably. Neither article made any mention of Bush’s “Damn right” admission of ordering torture.

Reporter Peter Baker wrote, “Perhaps it is time to think about whether America has begun to reconsider its 43rd president.” Columnist Maureen Dowd faulted “W’s decision-making” but said “his story-telling is good.”

In his memoir, Bush exudes confidence that he can achieve the resurrection of his popularity even as he boasts about his role on torture. It was a mark of almost inconceivable hubris that he would callously admit, this time in writing, his authorization of waterboarding.

But he did make that admission, which lobs the ball into our court as American citizens. It is indeed time for the kind of judgment Justice Jackson envisioned, not a celebratory book tour. Nor is it time for breaking ground on a new presidential library to further cover up crimes and falsehoods under a veneer of neo-con “scholarship.” (Progressives in Dallas have taken to calling Bush’s new structure a “lie-bury.”)

Bush’s confidence–or arrogance–can be traced, in part, to the power and tenacity of his acolytes, especially the neocons who remain very influential in Washington.

But blame also must fall on cynical politicians, especially in the House of Representatives, who thought they could maximize Democratic gains in 2006 and 2008 by ignoring their solemn oath to honor the Constitution of the United States. Forget the Founders, who took great pains to incorporate in the Constitution an orderly process for impeaching and removing senior officials guilty of high crimes and misdemeanors, foreseeing a time when that might be required.

The timid, calculating Democratic leadership wimped out when it had the chance – actually, when it had a Constitutional as well as moral obligation – to investigate, to build public support for action, and to hold Bush accountable.

Now, with the Republicans “shellacking” the Democrats on Nov. 2 and returning to power in the House, here’s a question for the outgoing Speaker Nancy Pelosi and her main malleable man, Judiciary Committee chair John Conyers: How’s all that appeasement workin’ for ya?

Shame, as well, on the Fawning Corporate Media (FCM) for joining Bush and Vice President Dick Cheney in stoking the hysteria that set the stage for the torture and then for caving in to White House pressure to avoid calling torture torture.

Last but hardly least, shame on Bush’s timid successor. Every time I hear that Obama is a former professor of Constitutional law I find myself muttering, “And that would be the constitution of which country?” The President’s soaring rhetoric falls flat fast the moment you stop to ponder how he has betrayed his oath to see to it that the laws are faithfully executed – in this case, by holding self-confessed torturers accountable.

Shame, too, on those of us who decide to remain silent as Bush openly brags about how he personally approved the use of controlled-drowning for interrogation. The Spanish Inquisitors who applied for the first patent on waterboarding had no qualms calling it what it is – tortura de agua.

Signs of the times

Before some of the revelations of the Bush book hit the media last week, I had been wondering how much light, if any, the memoir would shed on what Bush euphemistically labeled an “alternative set of procedures for interrogation.”

Call me naïve, but I had found it too much of a stretch to visualize a former president of the United States admitting in writing to having ordered waterboarding, the same technique for which Japanese and American soldiers have been tried, convicted and punished.

I am now trying to come to grips with the notion that I have been living in the past, the kind of past that Bush lawyer Alberto Gonzales would call “quaint” and “obsolete” (adjectives he applied to the Geneva Conventions), a past inspired by the Nuremberg principles, where there was at least a modicum of respect for the law – and such a thing a shame.

For over five months now, I have been unable to get out of my head the photo of a relaxed, tuxedo-clad George W. Bush in an armchair being interviewed after a speech in Grand Rapids, Mich., on June 2. He says nonchalantly:

“Yeah, we waterboarded Khalid Sheikh Mohammed. I’d do it again to save lives.”

Since I had not been able to shake that insipid image of the cavalier torturer in the armchair, there is little excuse for my being surprised at what Bush writes in his memoir about his role in ordering torture and the pride he takes in having done so.

I should have been fully prepared for Decision Points, in which the counterfeit cowboy assumes the very same posture of in-your-face-and-what-are-you-going-to-do-about-it-when-even-the-wimps-sworn-to-enforce-the-law-are-too-timid-to-do-so.

I have seen much change in the body politic since I arrived in Washington, D.C., almost 48 years ago. There is one change, however, that dwarfs all others in significance. It is that the country no longer has, in any real sense, a free media. Read Jefferson and Madison on the importance of a free media to preserving a democracy and you will be reminded of how very BIG this change really is.

Don’t believe me? This coming week, watch how the media gives George W. Bush a stay-out-of-jail pass as he starts to peddle his lie-infested memoir on TV and in bookstores. Watch how the moneyed interests he served lionize him at the groundbreaking for Bush’s “Presidential Center” in Dallas on Nov. 16.

The accomplices of the FCM can be counted on to suppress the truth about Bush and about their own complicity in cheerleading for war, torture and the rest. As is well known, cheerleading is a team effort demanding equal enthusiasm by all.

Maybe this is the real reason why NBC chose this particular time to put Keith Olbermann on leave without pay. Olbermann would never quite “get with the program.”

Unlike most of his pundit colleagues, he was uncomfortable buying into the wisdom of Nazi propaganda minister Joseph Goebbels, who famously said: “If you tell a lie big enough and keep repeating it, people will eventually come to believe it … It thus becomes vitally important for the State to use all of its powers to repress dissent, for the truth is the mortal enemy of the lie, and thus by extension, the truth is the greatest enemy of the State.”

How does the Big Lie technique translate to today? Simple. We will be getting a steady diet of this kind of punditry: “Waterboarding is merely something that a bunch of liberals associate with torture. And, besides, we waterboarded some of our own servicemen to show them what it was like” (as if no one has the mental capacity to distinguish between a demonstration and the real thing). And, Bush’s confidence was bolstered by the results of his painstaking efforts to acquire guidance from both the legal and the medical profession. Right?

And most of the lawyers and doctors of this great country will keep silent–even in the face of that kind of provocation.

This article was originally published in longer form at Consortium News.

Ray McGovern, a former CIA analyst, is co-founder of Veteran Intelligence Professionals for Sanity and a frequent contributor to Consortium News.