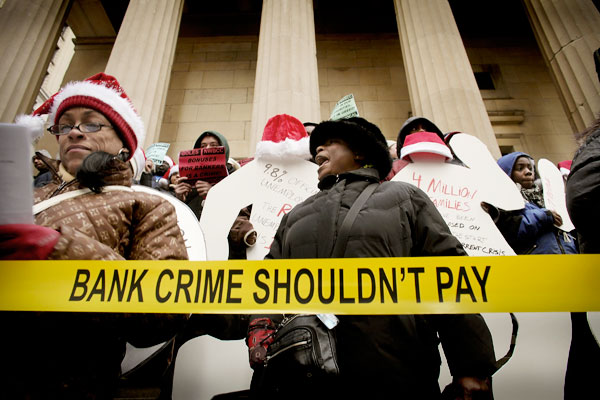 Students and activists, including the unemployed and those living in foreclosed homes, demonstrate outside the New York Stock Exchange on Dec. 15, 2010, in New York City. (Photo by: Spencer Platt/Getty Images)

5 Things Progressives Should Do—and Not Do

Don't talk about the need for a 'narrative.' Outside of literary theory, that word has become synonymous with 'lie.'

This article is part of In These Times' February 2010 issue cover story, "Help Wanted." For the rest of the story, read:

"Beyond Barack Obama," by Richard Flacks

#1 Don’t talk, write or argue about Obama, who has proved himself irrelevant to the progressive project, no matter how narrowly that project is defined. Similarly, don’t conflate progressives with Democrats, since the latter category prominently includes Obama.

#2 Organize the unemployed of all collar colors–white, pink and blue. The unions aren’t doing it, or at least not very much of it, for the simple reason that the unemployed can’t pay dues. You can either support existing organizing efforts like the Unemployed and Anxiously Employed Workers Initiative, which can be found on Facebook, or you can start your own by getting together with other economically challenged folks for purposes of mutual support and advocacy.

#3 Do not “mount an unapologetic defense of government.” It doesn’t deserve it. What we need is a progressive attack on government in its various armed and coercive functions– including the criminal justice system, the war on drugs, ICE, and the TSA. The faux libertarianism of the right should also be challenged with a militant defense of abortion and gay rights.

#4 Organize for a collective defense against foreclosures and evictions. Every time a bank swoops down to snatch up a home, it should be met with a crowd of jeering, obstructive neighbors. And although this may be point 4.5, how about organizing a mass refusal to pay back student loans?

#5 Don’t talk about the need for a “narrative.” Outside of literary theory, that word has become synonymous with “lie.” We know what’s going on here, a no-holds-barred class war of the top 1 percent–augmented by what Tom Frank calls the snake-flag crowd–against the rest of us. That’s not a “story” or a clever new “framing.” It’s what’s happening. We either fight back or get pummeled into the dust.

Barbara Ehrenreich, a journalist and author, first wrote for In These Times in 1977. Her recent books include Bright-sided: How Positive Thinking is Undermining America, Nickel and Dimed: On (Not) Getting by in America, and Blood Rites: Origins and History of the Passions of War. She has been a regular contributor to The Progressive, Harper’s, Time and In These Times, where she is a contributing editor.