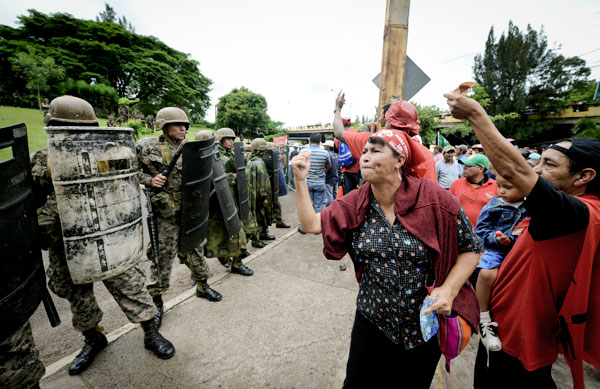 Supporters of deposed Honduran President Manuel Zelaya and members of the National Front of Popular Resistence (FNRP) shout slogans during a demonstration commemorating the first anniversary of the coup d'etat, on June 28, 2010, in Tegucigalpa. (Photo by: ORLANDO SIERRA/AFP/Getty Images)

The Known Unknowns in Honduras

Rights groups report that abuses have intensified under coup supporter President Porifiro Lobo, but the State Department has asked Congress to send $68 million to his regime.

When is a coup not a coup? Taken altogether, the secret diplomatic cables released by WikiLeaks have exposed multiple instances of deception by the U.S. State Department, in relation to foreign dignitaries, friendly nations and even U.N. Representatives. But recently leaked cables sent from the U.S. Embassy in Tegucigalpa, the Honduran capital, offer evidence that the State Department was, in at least one instance, also misleading the American people.

In June 2009, Manuel Zelaya, the democratically-elected president of Honduras, was ousted from power by a coalition of military leaders and far-right political elites, plunging the country into an economic and human rights nightmare from which it has yet to emerge. A month after the putsch, after weeks of rigorous investigation, U.S. Ambassador to Honduras Hugo Llorens cabled the State Department to say that, based on his research, the coup had been “illegal” and “unconstitutional.” The cable concluded by calling the putsch a throwback to “the way Honduran presidents were removed in the past: a bogus resignation letter and a one-way ticket to a neighboring country.” Honduran soldiers had kidnapped Zelaya in his pajamas and a “totally illegitimate” puppet government was installed.

This in turn led to mass protests across the country, followed by harsh crackdowns under martial law. According to human rights groups, scores of peaceful demonstrators, union leaders, journalists and teachers have been slain by government forces since the coup, and hundreds of others have been beaten and detained when police and soldiers attacked peaceful marches and demonstrations. (Ten journalists were murdered in 2010, making it the most dangerous country in the world for members of the press on a per capita basis.)

But the State Department chose not to tell the American people about atrocities. Instead the coup was portrayed as a murky legal situation and the Obama administration made little mention of the civil rights violations. Most important of all, say critics, the State Department never designated the takeover a “military coup,” which under U.S. law would have necessitated the cessation of all aid programs.

Because Honduras has been historically dependent on U.S. aid, Mark Weisbrot, co-director of the Washington, D.C.-based Center for Economic Policy Research (CEPR), says the Obama administration “could have put a lot of pressure on that [illegal] government to reverse the coup if they’d wanted to. But they made it clear they didn’t want to do that.”

The situation in Honduras has become so dire that in October 2010, 30 members of U.S. Congress wrote to Secretary of State Hillary Clinton, asking her to suspend further aid until the country’s disregard for human rights and culture of “impunity” has been dealt with. The State Department, which declined to be interviewed for this article, has yet to issue a response.

A ‘ruthless game of chess’

Despite Llorens’ report and the post-coup government’s terrible human rights’ record, the United States supported highly controversial elections held in November 2009, even though millions of Hondurans boycotted the vote due to concerns about corruption, suspension of independent media and the militarized atmosphere surrounding polls.

Although international rights groups report that abuses have actually intensified since coup supporter President Porifiro Lobo took office one year ago, the State Department has asked Congress to send $68 million in taxpayer funds to his regime this fiscal year.

According to CEPR’s Weisbrot, the State Department’s ethically dubious tactics have concrete political and economic objectives. “It’s a big, ruthless game of chess, and the pawns are very important to these people,” says Weisbrot, who calls the coup against Zelaya a “crime of opportunity” by the State Department, which he says is seeking to maintain military and economic control over the region. Honduras, says Weisbrot, is home to the U.S. military’s largest overseas base in the hemisphere and an important trading partner for the United States.

On the day he was kidnapped, Zelaya had planned to hold a popular referendum on re-writing the Honduran Constitution. While the coup-plotters themselves have accused Zelaya of wanting to change the nation’s charter to extend his own term in office, most analysts believe this was just an excuse by the ruling oligarchy to curtail much-needed social and democratic reforms.

Weisbrot believes the United States feared that a new constitution might outlaw foreign military bases on Honduran soil. “They would’ve gotten rid of Zelaya for that alone,” Weisbrot says.

Professor Dana Frank, who teaches Central American history at the University of California Santa Cruz, agrees about the State Department’s secret agenda, but she believes economic factors were just as influential in its decision to back the coup.

“It’s about economic power,” says Frank, who spoke to In These Times from the Aguan region of Honduras, where she was investigating recent attacks by the Honduran military and private security contractors against unarmed, landless peasants. “It’s about extracting wealth. It’s about supporting U.S.-based transnational corporations, ramming trade agreements down the throats of Latin American countries. It’s about exploiting workers throughout the hemisphere.”

A tactical error and a ‘failed state’

“Honduras has become a failed state,” says Bertha Oliva, director of the Committee for the Families of Disappeared Hondurans (COFADEH). Oliva, who recently received the Netherland’s prestigious Tulip Prize for her human rights work, claims the U.S. State Department “enabled” the coup by deliberately ignoring the warning sent by Ambassador Llorens. The State Department’s decision, says Oliva, has led directly to the human rights crisis.

“The [Wikileaks] cables demonstrate what we already knew–that the U.S. only serves the transnational companies and … the Honduran oligarchy,” says Oliva, who founded COFADEH after her own husband was disappeared by a death squad in the 1980s.

But Gilda Batista, a coordinator for the self-declared nonviolent National Front of the Popular Resistance (FNRP), tells In These Times that both the coup-plotters and the State Department erred in believing that Zelaya’s removal would squash the public’s hunger for freedom.

“I think they expected that Hondurans would get tired of denouncing [the coup], or the breaking of the rule of law, and that [pro-democracy] rallies would last fifteen days,” says Batista, whose FNRP has gathered more than 1.3 million petitions demanding a democratically chosen assembly to rewrite the country’s constitution. (On December 31, Zelaya vowed to return to Honduras in 2011 from the Dominican Republic, where he has lived since January 2010.)

Weisbrot also says the Obama administration made a tactical error in Honduras. “They deeply alienated Brazil, Argentina and [other countries] in South America. These governments–I talk to them all–they were very angry and disappointed. They thought Obama was going to be different.”

Although the Llorens cable is the most revealing Wikileaks document related to Honduras released thus far, it’s not the only one. Another cable sent before the coup disparages Zelaya, saying he is “not a friend” to U.S. interests. Others from several months after Zelaya’s eviction describe Congressman Dana Rohrabacher’s (R-Calif.) trip to Honduras to pledge his support for the post-coup government and score a lucrative private deal with local businessmen at the same time. Despite these revelations, Weisbrot believes there might be more to the story of the U.S. government’s involvement in the Honduran coup.

“I’m waiting for the cable that tells us what [the State Department] was talking about with the military right before the coup,” says Weisbrot, who points out that most Honduran military officers were trained in the United States.

“The Obama administration has publicly acknowledged that they were talking to the Honduran military right up to the [day] of the coup,” he says. “I’d like to know what they were saying.”