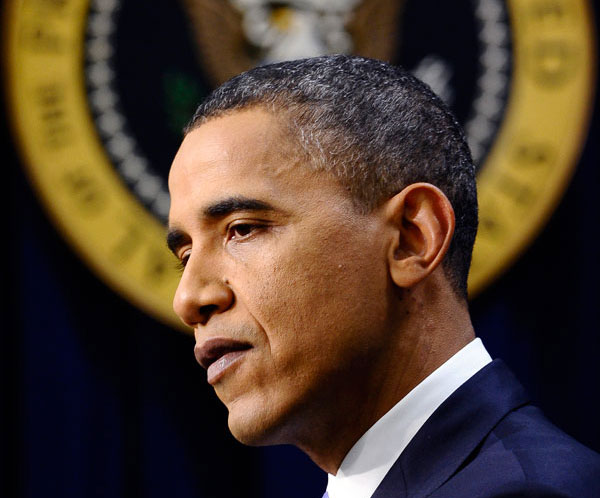 If we spend a lot of our energy in anguish and attacks on Obama, our own cynicism may ruin the chance to spark new possibilities. (Photo by: JEWEL SAMAD/AFP/Getty Images)

Lefty focusing on the president and his shortcomings distracts us from the work we need to do.

To wish for The Leader and to cry when he seems to abandon us is childish, and it bespeaks impotence.

This article is part of In These Times' February 2010 issue cover story, "Help Wanted." For the rest of the story, read:

"5 Things Progressives Should Do—and Not Do," by Barbara Ehrenreich

The growing progressive drumbeat about President Barack Obama’s failed presidency, coupled now with fantasies about opposing his re-nomination, or with anguished hand-wringing about his failure to communicate, to lead, etc. etc., dismays me. This hysteria is rooted in fear and anger over the intransigence of the corporate plutocracy we are up against. But the answer to corporate dictatorship and kleptocracy has to come from social movements–not the White House. History strongly suggests that grassroots disruption that threatens to unravel the social fabric is the fundamental impetus to real reform.

Yet the loudest voices on the left keep wishing that Obama would lead such a movement. It’s a natural wish–since the work of movement-building is hard, risky and costly for those who take it on. But to wish for The Leader and to cry when he seems to abandon us is childish, and it bespeaks impotence.

Let’s start by giving up a lot of BS about “principle.” There is no history of Democratic Party or liberal principle that Obama is betraying. FDR’s compromises to achieve Social Security and labor legislation abandoned African Americans with effects still strongly felt in our social order. No Democratic president was able to pass universal healthcare and all bargained away any chance of achieving it. It was FDR who gave J. Edgar Hoover the authority to spy on the Left, and JFK who gave him the same to spy on Martin Luther King. Bill Clinton’s abandonment of welfare and his other ‘triangulations’ were larger and more cynical betrayals than Obama’s (so far). Obama’s record of accomplishment, leadership and betrayal stacks up well against all his predecessors.

And let’s stop using ideological yardsticks to judge politicians. Is Obama “really” a progressive? Whatever he tells us he is, he must be a pragmatist in the real world he works in. And we should appreciate and even welcome that!

Ideology is a very poor predictor of integrity or action. Ideology is not what determines the political assessments that most Americans make. This is a big topic, but one advantage the Left has over the Right these days is that the latter is driven by narrow ideological thinking and therefore inevitably going to fail to connect with the American majority.

A big reason we aren’t yet in the midst of a movement on the Left has to do with the faults of the leadership in the national progressive organizational world. For example, it took months for the national organizations to call for a march on Washington for jobs. The One Nation event turned out to be a good start toward some kind of national agenda–and yet I don’t see much evidence of a concerted follow-up to it.

Many of the national leaders are now saying that they intend to be more assertive and independent. But even with a will to mobilize, strategies for effective action have to be grasped–and defining these is not an easy matter. Equally important, there is a loss of “vision”–an absence of articulate expression of how a better world might look.

Lefty focusing on Obama distracts us from the work we need to do.

What progressives have to try is to implement strategies that directly challenge corporate and financial domination. These have to include direct action that disrupts the institutional order. One essential theme: The costs and burdens of economic contraction and austerity must not be borne by the weakest and poorest.

The disgusting cycle, perpetuated by the Obama tax deal, that gives virtually all economic gain to the very top of the income pyramid has to be disrupted.

The wars, which hugely drain the public budget, have to be resisted.

Demands that might actually help people materially–and help the economy as well–need to be voiced and acted on–a massive mortgage write-down being one obvious example. Movement-based organizing on such issues needs to find targets that can be seen and addressed. For example, make locally accessible banks and their executives responsible for the mortgage crisis.

A final suggestion: Progressive organizations need to reinvest in college campus organizing. Instead of seeing students just as election time fodder, we need to consider that the campus is the primary space for generating deep, extensive discussion and debate about the social future. It’s also the place where human energy for bold and creative action can be generated. Back in the early 1960s, a few unions and older liberals more or less recognized their own political staleness, and put a little money and encouragement behind the Student Nonviolent Coordinating Committeee and Students for a Democratic Society–even as these upstart groups made them nervous because they weren’t “disciplined.”

Once again, the progressive side needs activist energy that isn’t controlled by big organizational practices and perspectives–energy and thinking that can break molds and invent new modes. But if we spend a lot of our energy in anguish and attacks on Obama, our own cynicism may ruin the chance to spark new possibilities.

Richard Flacks, an emeritus professor of sociology at the University of California, Santa Barbara, is the author of Cultural Politics and Social Movements (co-editor, 1995); Beyond the Barricades: The '60s Generation Grows Up (1989); Making History: The American Left and the American Mind (1988), and many articles on social movements, left culture and strategy.