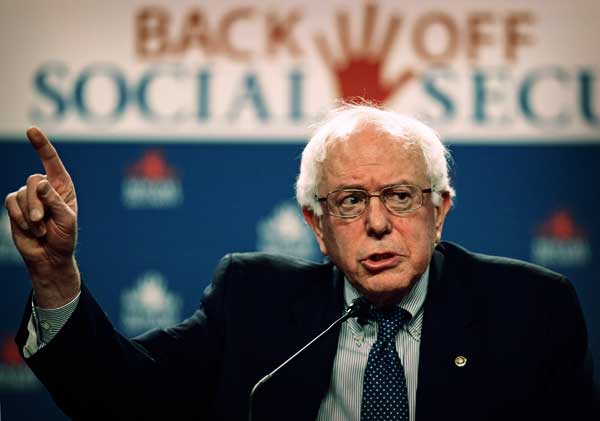 Democrats must refuse to mess with the retirement program.

The impact of the 2010 midterm elections is painfully clear. In Washington and in state capitols around the country, Republicans are enacting a right-wing agenda that guts Social Security, curtails union rights, restricts abortion, defunds public media, stops progress toward universal healthcare and scapegoats immigrants. For May 2011 issue's cover package, "The War at Home," In These Times turned to labor movement strategist Stephen Lerner (Glenn Beck’s latest bête noire) and seven other progressive writers and activists to report on the battles to preserve American rights and institutions. These are their dispatches from the frontlines. —The editors

In his 1989 book On Borrowed Time, Wall Street baron Peter G. Peterson wrote that “heroic medical interventions on behalf of the aged constitute an unaffordable and unjustifiable claim on society’s resources,” adding that “the elderly, after all, have already accomplished and enjoyed most, if not all, of what they can reasonably expect in life.” In 1994, he famously said, “We will no longer be able to afford a system that equates the last third or more of one’s adult life with a publicly subsidized vacation.” In 2000, when the budget was in surplus, he told PBS that even trying to put more money into the Social Security system was futile because some future politician would just spend it. In 2005 the Bush administration’s failed privatization scheme was a set-back. But Peterson didn’t give up. By 2008, he had created a new organization devoted to sounding the alarm about Social Security solvency (again), and seeded it with $1 billion.

Let’s just say that Pete Peterson is as serious as a heart attack about ending the social safety net in America.

But he is not alone. Plutocrats, Wall Street traders and conservative ideologues have been hostile to the programs since their inception, and, depending upon the economic health of the nation at the time, have used every argument in the book to pronounce them weak or inadequate. When times are good they hold out the “opportunity” to “invest” Social Security in the stock market. Bad times call for “sacrifice” for the good of the nation. Whatever the rationale of the moment, the bottom line is that conservative ideologues are sure that these “socialistic” programs are destroying the fabric of America. Wall Street wants its hands on all the retirement savings and Republican partisans are desperate to decouple the citizenry from any positive relationship with its government. It is not a battle; it’s a decades-long war.

Traditionally, Democrats have defended the programs against these assaults, guarding the crown jewels of Roosevelt’s New Deal with everything they have, knowing that their philosophy of government was validated every time a senior citizen or disabled person or motherless child was able to live a decent life even though they weren’t able to work. They knew that the peace of mind these programs give to people allows them to take the risks that are necessary for a growing, dynamic economy. They knew that the plutocratic ideal of feudalistic trickle down economics was antithetical to the foundation of the American Dream–a thriving, solid middle class.

But Democrats are waffling today. In a quixotic attempt to fix the problems in the current economy without confronting the plutocrats, the Democrats are using the illogical argument that since Social Security is projected to have a shortfall in 35 years, we must cut benefits now. And they seek to prove to “the market” that the government is fiscally responsible by showing it’s willing to inflict pain on its citizens–in the future. But Peterson and his legion will be unappeased–they have shown they will not rest until the programs are eliminated. (After all, they think of social security as a “publicly funded vacation.”)

We must demand that Democrats just say no to any “grand bargain” that includes changes to the benefit structure of Social Security. Healthcare costs, a moribund economy and defense spending are driving the deficit projections, not Social Security. The trust fund is well-funded for some time, invested in the safest investment in the world: the U.S. Treasury bond. No good will come of touching the program right now. Literally.