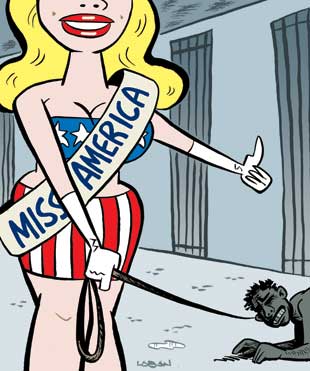 What Rumsfeld Doesnt Know That He Knows About Abu Ghraib

Does anyone still remember the unfortunate Muhammed Saeed al-Sahaf? As Saddam’s information minister, he heroically would deny the most evident facts and stick to the Iraqi line. Even as U.S. tanks were hundreds of yards from his office, al-Sahaf continued to claim that the television shots of the tanks on Baghdad streets were Hollywood special effects. Once, however, he did strike a strange truth. When told that the U.S. military already controlled parts of Baghdad, he snapped back: “They are not in control of anything—they don’t even control themselves!” When the scandalous news broke about the weird things going on in Baghdad’s Abu Ghraib prison, we got a glimpse of this very dimension of themselves that Americans do not control.

In his reaction to the photos showing Iraqi prisoners tortured and humiliated by U.S. soldiers, President George W. Bush, as expected, emphasized how the deeds of the soldiers were isolated crimes that do not reflect what America stands and fights for—the values of democracy, freedom and personal dignity. And the fact that the case turned into a public scandal that put the U.S. administration on the defensive is a positive sign. In a really “totalitarian” regime, the case would simply be hushed up. (In the same way, the fact that U.S. forces did not find weapons of mass destruction is a positive sign: A truly “totalitarian” power would have done what cops usually do—plant drugs and then “discover” the evidence of crime.)

However, a number of disturbing features complicate this simple picture. In the past several months, the International Committee of the Red Cross regularly bombarded the Pentagon with reports about the abuses in Iraqi military prisons, and the reports were systematically ignored. So it was not that U.S. authorities were getting no signals about what was going on—they simply admitted the crimes only when (and because) they were faced with their disclosure in the media. The immediate reaction of the U.S. military officials was surprising, to say the least. They explained that the soldiers were not properly taught the Geneva Convention rules about how to treat war prisoners—as if one has to be taught not to humiliate and torture prisoners!

But the main complication is the contrast between the “standard” way prisoners were tortured in Saddam’s regime and how they were tortured under U.S. occupation. Under Saddam, the accent was on direct infliction of pain, while the American soldiers focused on psychological humiliation. Further, recording the humiliation with a camera, with the perpetrators included in the picture, their faces stupidly smiling beside the twisted naked bodies of the prisoners, was an integral part of the process, in stark contrast with the secrecy of the Saddam tortures. The very positions and costumes of the prisoners suggest a theatrical staging, a kind of tableau vivant, which brings to mind American performance art, “theatre of cruelty,” the photos of Mapplethorpe or the unnerving scenes in David Lynch’s films.

This theatricality leads us to the crux of the matter: To anyone acquainted with the reality of the American way of life, the photos brought to mind the obscene underside of U.S. popular culture—say, the initiatory rituals of torture and humiliation one has to undergo to be accepted into a closed community. Similar photos appear at regular intervals in the U.S. press after some scandal explodes at an Army base or high school campus, when such rituals went overboard. Far too often we are treated to images of soldiers and students forced to assume humiliating poses, perform debasing gestures and suffer sadistic punishments.

The torture at Abu Ghraib was thus not simply a case of American arrogance toward a Third World people. In being submitted to the humiliating tortures, the Iraqi prisoners were effectively initiated into American culture: They got a taste of the culture’s obscene underside that forms the necessary supplement to the public values of personal dignity, democracy and freedom. No wonder, then, the ritualistic humiliation of Iraqi prisoners was not an isolated case but part of a widespread practice. On May 6, Donald Rumsfeld had to admit that the photos rendered public are just the “tip of the iceberg,” and that there were much stronger things to come, including videos of rape and murder.

This is the reality of Rumsfeld’s dismissive statement, a couple of months ago, that the Geneva Convention rules are “out of date” in regard to today’s warfare.

In the debate about the Guantanamo prisoners, one often hears arguments that their treatment is ethically and legally acceptable because “they are those who were missed by the bombs.” Since they were the targets of U.S. bombings and accidentally survived them, and since these bombings were part of a legitimate military operation, one cannot condemn their fate when they were taken prisoners after the combat—whatever their situation, it is better, less severe, than being dead. This reasoning tells more than it intends to say. It puts prisoners into a literal position of the “living dead,” those who are in a way already dead (their right to live forfeited by being legitimate targets of murderous bombings). Thus the prisoners are now what philosopher Giorgio Agamben calls homo sacer, those who can be killed with impunity since, in the eyes of the law, their lives no longer count. If the Guantanamo prisoners are located in the space “between the two deaths”—legally dead (deprived of a determinate legal status) while biologically still alive—then the U.S. authorities that treat them this way are in an in-between legal status that forms the counterpart of homo sacer. They act as a legal power, but their acts are no longer covered and constrained by the law—they operate in an empty space that is nonetheless within the domain of the law. Hence, the recent disclosures about Abu Ghraib display the consequences of locating prisoners in this place “between the two deaths.”

If Rumsfeld thinks that the main dangers in the confrontation with Iraq were the “unknown unknowns,” that is, the threats from Saddam whose nature we cannot even suspect, then the Abu Ghraib scandal shows that the main dangers lie in the “unknown knowns”—the disavowed beliefs, suppositions and obscene practices we pretend not to know about, even though they form the background of our public values.

Thus, Bush was wrong. What we get when we see the photos of humiliated Iraqi prisoners is precisely a direct insight into “American values,” into the core of an obscene enjoyment that sustains the American way of life.