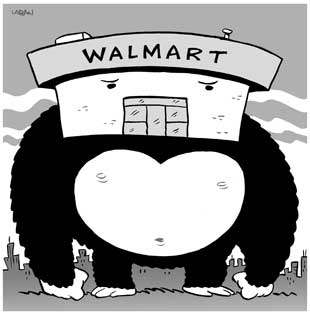 The hows and whys of beating the Bentonville behemoth

Walter “The General” Brooks stood amid the vacant buildings of a former Reyerson Steel plant on Chicago’s South Side, the projected site of a shopping center anchored by a Wal-Mart discount store. “We need jobs,” exclaimed Brooks, owner of a nearby fried chicken restaurant. “There are no industrial jobs around. They’re all overseas.”

But Wal-Mart may not be the answer to his prayers.

In late May the Chicago City Council narrowly turned down plans for a Wal-Mart at this site, while approving a Wal-Mart in another largely black neighborhood on the city’s West Side at another closed factory site. Wal-Mart and its supporters, including local aldermen and some clergy and community leaders, said that its two stores would bring nearly 500 jobs to neighborhoods with high unemployment, sparking much-needed economic development. But labor unions and other community groups argued that Wal-Mart offers poorly paid jobs with limited benefits, destroys other local businesses and costs the public treasury dearly.

“The lowest price is great,” said Alderman Joe Moore, a leading council opponent of Wal-Mart. “But you need standards in place that benefit everyone.” Rather than simply oppose the new stores, the labor-community coalition demanded that Wal-Mart sign a “community benefits agreement” promising good corporate behavior, including local hiring, living wages, comprehensive health benefits, neutrality toward union organizing, nondiscrimination in employment and avoidance of predatory pricing. But everyone knew Wal-Mart would never agree.

A model on the march

As the world’s largest corporation and the nation’s leading retailer rapidly expands into core urban areas from its original base in small Southern and Midwestern towns, Wal-Mart stores (especially its huge Supercenters with grocery departments) face many objections. Their size destroys community character (the National Trust for Historic Preservation recently said superstores threatened the entire state of Vermont); they create traffic problems and urban sprawl, and they leave behind ugly, unused hulks as business strategies shift (371 Wal-Marts currently stand empty).

But the central fight is over the corporation’s economic effects on workers and communities.

The colossus from Bentonville, Arkansas, is becoming the template for contemporary American capitalism, says historian Nelson Lichtenstein, much as the Pennsylvania Railroad, General Motors or Microsoft were before it. The company’s impact reaches far beyond local communities, where more than 220 “site fights” have successfully blocked Wal-Mart—as local residents did recently in Inglewood and Santa Rosa in southern California—but not slowed the company’s growth to 3,500 stores and 1.2 million employees in the United States alone. Wal-Mart’s low-road labor strategy drives countless other companies to cut wages and benefits of both retail and manufacturing workers and to buy more products from lowest-wage producers overseas, leading to what critics call the “Walmartization” of America.

And while Wal-Mart competition does lower prices, it also depresses wages and eliminates jobs. One 1999 study reported that 1.5 jobs had been lost for every job that Wal-Mart created. A recent projection by the University of Illinois at Chicago’s Center for Urban Economic Development concluded that the proposed West-Side Chicago store likely would yield a net decrease of about 65 jobs after that Wal-Mart opens, as other retailers in the same shopping area lose business. A study cited in Business Week as showing modest retail gains after Wal-Marts open actually reported net job losses counting effects on warehousing and surrounding counties.

Wages are low at notoriously anti-union Wal-Mart—averaging about $9 an hour for full-time workers, around $8 for the roughly 45 percent of “associates” working less than 45 weeks a year. But Wal-Mart also helps hold down wages throughout the retail industry, with a few exceptions like the partly-unionized Costco (where wages average $16 an hour) or more heavily unionized grocery stores. A 1999 study for the Orange County Business Council forecast that the entry of grocery supercenters such as Wal-Mart operates could cost southern California $2.8 billion in lost wages and benefits each year as grocers cut the jobs or wages and benefits of a quarter million largely unionized grocery workers.

But “Walmartization of America has a broader impact than just retail workers,” says Greg Denier, spokesman for the United Food and Commercial Workers, which represents grocery workers. “Wal-Mart probably has had more negative impact on manufacturing than on other jobs in the United States.” Wal-Mart also squeezes American consumer goods producers, forcing them to cut labor costs, move overseas or be replaced by foreign suppliers. Accounting for 10 percent of all U.S. imports from China in 2002, the corporation even pressures wages downward in poor countries, from El Salvador to Bangladesh. It also drives competitors to import more, pushing the True Value hardware store cooperative to boost imports from less than 1 percent of its products to 18 percent.

Wal-Mart sells cheaply and uses fewer workers partly because it is a technological and organizational innovator, but its success depends even more on its relentless pressure on workers and suppliers, and its extraordinary market power is by far the dominant retailer of many goods. The corporation is likely to control 35 percent of all U.S. food and drug sales by 2007.

Wal-Mart also shifts many of its costs to taxpayers (or other businesses that indirectly pay costs of Wal-Mart’s underinsured employees). A recent study by Good Jobs First, an organization that monitors economic development policies, found that state and local governments had given at least $1 billion in subsidies to stores and distribution centers. Wal-Mart also pays so little that many of its workers rely on state healthcare subsidies, food stamps, housing vouchers and other public aid. According to a recent study by the University of California at Berkeley Center for Labor Research and Education, California alone spends $10 billion annually to subsidize Wal-Mart and similar low-wage employers. Congressional Democratic staff calculates that federal taxpayers pay $2,103 per year in subsidies for the average Wal-Mart worker.

Taming the Wal-Mart beast will require a massive, broad-based crusade. Organizing unions against such a huge, implacable corporation is daunting without a commitment of the entire labor movement, perhaps starting in Canada (where there is the possibility of a small breakthrough), focusing first on distribution centers or organizing a union that functions without a majority of workers, as advocated by Wade Rathke, chief organizer of the community organization, ACORN, and a Service Employees International Union local.

Fighting Wal-Mart one store at a time often makes sense locally and educates the public, but it also risks antagonizing consumers looking for bargains or residents of poor neighborhoods, especially if labor and community opponents can’t offer better development options, argues local labor leader John Dalrymple, a key figure in a narrowly defeated effort to block Wal-Mart in Contra Costa County, California. There’s a need for a broader strategy to hold Wal-Mart accountable and to promote the “high road” alternative of skilled, well-paid retail work advocated in Chicago by the nonprofit Center for Labor and Community Research.

For example, newly proposed legislation in Los Angeles would make approval of a big box store depend on the city government’s evaluation of its economic impact. A 2003 California law—contested in an upcoming fall referendum partly financed by Wal-Mart—would require big employers to provide affordable health insurance for all employees. Wal-Mart faces hundreds of legal challenges, including the largest class action suit for discrimination against female employees, and some strategists are considering anti-trust action to curb Wal-Mart’s economic and political power.

“We want development but development that contributes to building community,” argues Madeline Janis-Aparicio, director of Los Angeles Alliance for a New Economy. “If Wal-Mart wants to come on those terms, they have a place.”