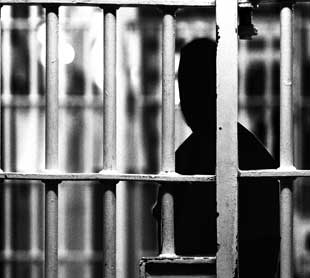 On April 7, politicians and law enforcement officials gathered in Tacoma, Washington, to celebrate the opening of the Department of Homeland Security’s newest gem, a $115 million facility called the Northwest Detention Center.

The building, designed to hold up to 700 undocumented immigrants awaiting deportation, was nearly two years in the works, and supporters hoped it would provide a much-needed economic boon to the region.

Later that week, the Justice Department’s Civil Rights Division sent a report to Maryland Governor Robert Ehrlich, documenting the results of an investigation into two of the state’s juvenile halls. In stomach-churning detail, investigators described how employees brutally beat youths at the facilities, and how basic living conditions didn’t meet even the lowest constitutional standards. In a subsequent statement, Assistant Attorney General R. Alexander Acosta said, “No juvenile should be exposed to such conditions.”

One of the juvie halls named in the report, the Charles H. Hickey, Jr. School, was operated by Correctional Services Corporation (CSC), the Sarasota, Florida-based company contracted by Homeland Security to run its Tacoma detention center and another in Texas, slated to open next year.

The fact that Homeland Security—specifically its Immigration and Customs Enforcement (ICE) branch that oversees detention centers—would hire a company whose facility was the subject of a recent and damning federal investigation is as perplexing as it is disturbing. More disconcerting is that the government would employ CSC after nearly a decade of similar scandals.

Founded in 1989 by Morris Esmor and James Slattery, who ran an infamously decrepit welfare hotel in New York, CSC initially was involved in operating halfway houses for the state. Then known as Esmor, the company rose to prominence when detainees at a federal detention center for undocumented immigrants in Elizabeth, New Jersey, rioted over deplorable living conditions and abuse by guards. Shortly after, the Immigration and Naturalization Services (INS), ICE’s predecessor, closed the detention center and terminated its contract with Esmor—which then changed its name to CSC and moved its headquarters to Florida.

Three years later, a Florida state jail monitor discovered that CSC was purposefully keeping juveniles at the Pahokee Youth Development Center past their release dates so it could make more money. Inspection reports ripped conditions at Pahokee and the way employees treated its charges, some of whom alleged physical abuse. In 1999, the state seized Pahokee from CSC before its contract was up.

INS nonetheless awarded CSC a contract to run its Seattle detention center. But back in New York, the company still couldn’t steer clear of the headlines. In 2000, the head of CSC’s New York offices was arrested in the Dominican Republic on charges of producing child pornograp

y. Impropriety regarding CSC’s cozy relationships with local politicians also surfaced. In 2003, the New York State Lobbying Commission fined CSC $300,000 for failing to disclose gifts to elected state officials—the stiffest penalty meted out by the agency. CSC executives were subpoenaed in a criminal probe into the company’s political activities.

CSC’s most recent abuses in Maryland hardly present a new phenomenon in that region, either. In 2001, the Maryland Department of Juvenile Justice chose not to renew CSC’s contract to run another youth facility, the Victor Cullen Academy, after a series of audits revealed the familiar pattern of inadequate living conditions and abusive treatment by employees, including allegations of a “fight club” where youths were encouraged to battle each other like gladiators. CSC was forced to pay $600,000 to the state for violating the terms of its contract at Cullen.

“I can’t imagine CSC being an appropriate provider of correctional services for any human being in the U.S., based on what they’ve done here,” adds Heather Ford, director of the Maryland Juvenile Justice Coalition, which monitors the state’s juvenile facilities and has interviewed youths and their parents from both Cullen and Hickey.

Indeed, given the haunting consistency of CSC’s problems, one wonders how Homeland Security came to decide that this particular company should run two of its detention centers.

Part of the answer lies in the history of immigration detention centers themselves, says Mark Dow, author of the new book American Gulag: Inside U.S. Immigration Prisons.

Before the Department of Homeland Security was created in 2002, Immigration and Naturalization Services (INS) handled detentions under the purview of the Justice Department. Dow’s book documents cases of abuse and unjust imprisonment in INS detention centers dating back to the ’80s and the influx of immigrants from countries like Haiti, Guatemala and El Salvador. Such an environment thrived, he says, because detainees were trapped in a legal netherworld and few outside the detention center walls noticed.

The potential for abuse worsened as the number of undocumented immigrant detainees exploded from 5,532 in 1994 to 20,000 in 2001. Faced with mounting costs, INS began contracting with private companies, states and counties. But the resulting patchwork of federal, private and local responsibility created even less accountability, says Dow, and in effect helped further shield INS from public scrutiny.

Following 9/11, the Justice Department added to the secrecy shrouding detainees by invoking a series of draconian measures designed to expand INS’s power. They include closing immigration hearings to the public and holding detainees without charge for 48 hours, or in emergency cases, indefinitely. INS officials denied mass roundups, but it was clear people were being detained with increased regularity. Although specifics are difficult to come by, Dow says between 1,200 and 5,000 people have been detained as a result of the Justice Department’s new policies.

The Department of Homeland Security absorbed INS and repackaged the agency’s detention center responsibilities into ICE, which made little difference in how things were run, says Dow.

“There is a long and entrenched agency culture of racism and brutality that carried over from INS to ICE,” he says. “And on top of that, you have always had the accountability and incompetence problem.”

Indeed, in 2003, the General Accounting Office (GAO) produced a report on Homeland Security finding inherent problems with the contracting procedures of INS, which had not yet morphed into ICE. The report concluded that INS wasn’t conducting fair and open contracting, and perhaps more important, that it wasn’t adequately monitoring its contractors once they were hired. ICE responded by updating its oversight of contractors to ensure humane treatment of detainees, says Tim Perry, ICE’s branch chief of detention acquisition and support.

The GAO didn’t specifically examine the relationship between Homeland Security and CSC but emphasized that the problems with open competition and oversight are still there, says Michele Mackin, assistant director of acquisition and sourcing management for GAO and a co-author of the report.

“Our concerns are not 100 percent gone,” she says. “Clearly, we recognize there are problems.”

Despite that, a company’s history is “one of the most important factors” of the contracting process, says Soraya Correa, director of procurement for ICE. CSC’s Seattle facility has experienced relatively few problems, but given the overwhelming scope of its troubles elsewhere, it appears that ICE didn’t do its homework.

“In some cases when you go out and call references, what’s being explained to you isn’t quite what’s been documented in the newspapers,” Correa says. “We have to make a best value judgment based on the information made available to us.”

Dow disagrees. “Generally speaking, people at the highest levels know about the history of mistreatment and lack of accountability [in terms of whom they’re hiring],” says Dow. “As one INS official told me, immigration headquarters uses private companies as a buffer.”

CSC official Russell Rau, however, maintains his company’s integrity. “We’ve been running the INS facility in Seattle for over a decade without incident. Now we’ve built this new facility at our expense for the needs of the detainees. We’re proud of our record.”

Meanwhile, CSC, which employs a former INS official as a senior vice president, stands to earn up to $22 million a year in federal dollars in Tacoma and close to the same in Texas.

With its well-documented and tragic history, the real cost could be much greater.

Dan Frosch is an award-winning journalist based in New York whose work has appeared in the Los Angeles Times, The Source and the Santa Fe Reporter.