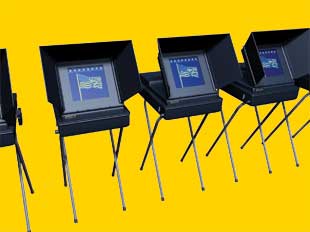 Do you know what this number is?

It’s the number of votes by which Bush supposedly beat Gore in the year 2000.

On the second day of November this year—mark your calendar—Stupid White Men will be stripped of the job titles they do not deserve because of this article and the book from which it is excerpted and the thousands of people who read it between March and October of 2004.

I am not exaggerating. I am not giving an inspiring speech.

I am putting my reputation on the line to tell you what’s going to happen and invite you to be part of it.

On Tuesday, November 2, the gang of Stupid White Men currently occupying the White House are gonna lose their jobs. Even more Stupid White Men will be evicted from office on November 7, 2006, November 4, 2008, November 6, 2010, and every election thereafter (not to mention the state and local ones in between).

If Stupid White Men refuse to leave, sheriffs will have to evict them and place their family photos, gun collections, liquor stashes and MBA plaques in the street. It will be a sad day.

Then they’ll be taken away by nice people to a safe place where they can’t hurt anyone ever again. Or maybe they’ll hide in a cave.

George Walker Bush, how can you live with yourself?

Why don’t you be honest and kick the schoolchildren you’re going to leave behind? Don’t worry, by the time they’re old enough to vote, you’ll be retired—just in time to let them pay your Social Security. Go ahead, George, no one’s looking. Your tax cuts are our school cuts, our health cuts. Your $6 to $10 trillion debt is robbing us of our future. It isn’t a very Christian thing to do.

And please notice (I know some of you are sensitive about this) the title of my book is not All White Men Are Stupid. I’m a white man. Johnny, put down the shotgun!

See, here’s my picture. I look just like you, Johnny: a white American male. From the Midwest, Johnny, just like you. I like to eat pizza, play sports, go to the beach, talk on my cell phone. And I love my country, Johnny. I’ll fight to defend it if I have to. I’ll even fight to defend it from you. America is a beautiful place, Johnny. Think of all the lakes and rivers we have! Doesn’t it make you want to go swimming? There’s only one problem, Johnny. We can’t swim anymore because our lakes and rivers are full of chemicals dumped by your friends’ companies. Since you’re in charge of the “Justice Department” and polluting is a crime, would you please talk to them for me? Thanks.

I want to swim. Without getting cancer. Is that too much to ask? I also like to play sports and, in case I get injured, I would like to have health insurance. Education is important, too. It would be nice to go to college without being in debt—like my peers in Canada and Europe. But you’d rather spend my tuition money building new detention centers for random Arab-Americans.

I have one more request. I hope this isn’t too extravagant. I’d like to be able to own my own home one day, Johnny. That’s right, affordable housing. And if I do purchase a home, God willing, I don’t want it to get blown up or robbed because your friend, the “president” thinks “support the troops” means “invade more countries,” “cut benefits for military families” and “let homeless veterans wig out on the street” with no housing, job training, drug rehab or mental health programs.

I am a simple person, Johnny. I have simple needs.

Oh yeah, there’s one more thing. About my cell phone. I like to talk on it. And I don’t like the idea of people listening to me while I talk.

And tell Condoleezza for me: It’s not just Stupid White Men who’re gonna get evicted from office this year and next year and the year after that. We’re also going to pinkslip Stupid White Women (there are a few) and Stupid People of Color (we know who you are), and we’re gonna provoke a sudden unexpected career change for Stupid People of Any Race and Gender who shit on the rest of us in order to please their golf buddies in Big Tobacco, Big Oil, Big Prisons, Big Bombs, Big Families with Big Bank Accounts Full of Money They Didn’t Earn and Short Names that begin with the letter B.

I know what you’re thinking. We’re fighting an uphill battle in 2004. The Democratic candidates are not all we hoped for. Bush has more money. Bush is a few points ahead in some of the polls. The voting machines are rigged. Most Americans are brainwashed by what they see on TV and … um, no.

In case you don’t remember, Gore was a shitty candidate. He was outspent, too. The election was rigged. And still, with all of that, Gore lost by 537 votes.

With 538 more votes. George Bush would not be president right now.

That’s exactly what they did in New Mexico.

Check out this conversation I had with my friend from New Mexico.

Friend: “Well, after going to city council meeting after city council meeting with 100 supporters and losing 2–7 each time, we thought, ‘This shit is not working.’ We decided that to stop this road from being built we had to get involved in the electoral scene. We developed a political action committee and a political consulting firm. In four years, we’ve gone from a 2–7 vote to a 5–4 vote. We replaced three of our strongest opponents with three champions. Long term, we’ve built a new political force led by young people of color that has reshaped Albuquerque politics.”

My friend is Eli Lee. His company, Soltari.com, runs grassroots political campaigns. Soltari’s local victories had a major national impact: They swung the state of New Mexico for Gore in 2000. They turned out 2,016 “unlikely” Hispanic voters in November 2000. Gore won New Mexico by 366 votes. The whole state. 366 votes.

“Are you serious?” asks University of New Mexico sophomore Marisol Enyart, when I told her this story. “Three hundred sixty-six votes??? That’s like one art class at UNM.”

Sometimes it doesn’t take that many votes to swing a state. According to the Swing State Project (www.gogovernment.org/swingstate), in 2000 New Hampshire was decided by 7,211 votes, Oregon by 6,765, Wisconsin by 5,708, Iowa by 4,144—not to mention Florida.

Am I missing something here? 538 votes.

Anyone could’ve moved down to Florida and organized 600 more people to vote. One person! Do you think you could’ve done it? The Youth Vote Coalition found in 2000 that if you remind young people face-to-face that they should vote, and you register them (which is really easy), and you tell them where their polling place is, they are 10 percent more likely to vote. On average, in the 2000 election, young adults age 18 to 24 voted at a rate of 32 percent. So the goal is to increase that number to 42 percent. Sound possible?

Let’s do the math.

Do you think you could’ve spared four months to change the course of world history? Where were you when we needed you?

Well, now you have another chance. In 2000, only a third of young adults voted, so there are plenty of people to talk to.

Because we weren’t paying attention to electoral politics.

If half the young folks from states like Iowa and Wisconsin who attend college in Chicago or Boston would vote absentee in their home state, it could swing a close presidential election. (You can vote absentee through your state’s secretary of state.)

And the New York and California people who attend college in Ohio and Pennsylvania need to vote where they’re at. Are you following me?

So if you’re from, say, Missouri and you live in Washington, D.C., you should throw a party and invite over your Missouri friends to plan how you’re gonna vote absentee and call up everyone from your state.

If you don’t live in these states, then we have another job for you. The Republicans will have two to three times as much money as the Democrats in 2004. So even if you’re not in a swing state, your job is to make noise and force them to spend some of their TV money in your state.

Republicans are greedy. They think they can grab Illinois, California, even New York. They’re also arrogant. They think they own Georgia, North Carolina, Louisiana, Virginia, Colorado, Kansas and Kentucky. Make them spend their TV money on it!

The harsh reality that we young whippersnappers hate to face is that most people in America actually don’t think like us and our friends. The revolution is not going to happen tomorrow. The system will not magically crumble into a multi-racial ecological paradise. We actually have to do the hard work of winning over and mobilizing another 10 or 20 million or so skeptical American voters to build a solid progressive majority so that we can actually have dangerous revolutionary things like healthcare and affordable tuition; jobs that pay enough to live on; Social Security for when we’re old; and an economy based on ecological sustainability instead of permawar. And maybe even a seat at the table for people who are not multimillionaires.

Getting there will take a 30-year plan.

And if y’all Greens think you have a fucking prayer in hell of changing shit in that America, y’all need to take some Dexedrine and open them eyes. I like Greens. My heart is with y’all. I think you have the power to destroy the Democratic Party. And I think you’re generally good people.

Like most good people, I don’t think you understand the art of war. You can’t fight on two fronts at once. First you have to get together with the Democrats to beat the Republicans. If you fend off the Republican threat, it buys you slack to move the Democrats in a more progressive direction over a period of decades as people of color become a majority. If you kill the Democrats first, then the Republicans control everything and they can yank the floor out from under all of us and shift the whole playing field to the right. You think things are bad now? You think the two-party system is bad? Say hello to the one-party system.

What we need over the next 30 to 50 years is progressive fusionism. We need to begin the long, painful process of healing the wounds between us, rebuilding those bridges and emphasizing our common ground.

Billy Wimsatt is the founder and former executive director of the League of Independent Voters, an organization that facilitates the creation of local progressive voting blocs nationwide. He made a five-year commitment in 2003 to build the league into a vehicle for pissed-off young people to make their power felt in electoral politics.